Look, there are a lot of comics out there. Too many. We can never hope to have in-depth conversations about all of them. But, we sure can round up some of the more noteworthy titles we didn’t get around to from the week. Today, we discuss Star Wars 26 and A.D. After Death 2. We’ll be discussing East of West 30 on Wednesday, so come back for that! As always, this article contains SPOILERS.

Michael: The ongoing narrative of Star Wars must need to pump the brakes a bit because once again Jason Aaron has Luke Skywalker dust off Obi-Wan Kenobi’s journal for some more “Ye Old Jedi Stories.” This isn’t a bad idea in theory but the structure of Star Wars 26 makes for a disjointed read.

The first half of the issue serves as an epilogue for the recent “Scar Squad/Star Destroyer heist” arc, followed by a story of people mistakenly judging Yoda by his size and ending with Yoda on a planet of children. One of my problems with the story is that it feels like there should be some connective thematic tissue between Luke’s story and Yoda’s story – but there is none thus far. The conflict in the present is based on Luke’s reluctance to leave C-3PO in the hands of the Empire, while Yoda’s story is Yoda being small and surprisingly powerful with the force – basically every Yoda story ever. It feels like filler.

We as the comic book readers are experiencing Yoda’s story as a flashback whereas Luke is experiencing it as a secondhand – and incredibly vague – folktale. The significance of a bunch of alien goons underestimating the small green Jedi is likely lost on Luke, because that would undercut the Yoda reveal in The Empire Strikes Back.  It’s good to see Salvador Larroca keep it in the Star Wars family but he doesn’t impress as he did with Darth Vader. Scar Squad loses their larger-than-life vibe and sometimes Larroca’s life-like style is a little too life-like that it’s unsettling.

Patrick: The “cure for death” in Scott Snyder and Jeff Lemire’s A.D. After Death is sort of the ultimate MacGuffin. Never mind the actual importance of such a cure, the symbolic significance of it holds an even greater weight within this narrative. Snyder has even gone out of his way to establish a new vocabulary to express these kinds of goals, cribbing from Jonah’s B.D. life as a thief. So far, both installments of A.D. After Death have contained long narrative segments that are more novel than they are comic book. Those sections are our windows to Jonah’s life centuries before the Jonah we know and experience in the real-time pages of sequential art-based storytelling. The kicker though, is that these novelistic sections are also Jonah’s window to his own identity – as human beings achieve immortality, their longevity outpaces their ability to remember. Everything that one of these characters experiences in the 80s, 90s, 2000s, etc. is not something that they remember, but something they must learn about from their own records almost a thousand years later.

That’s what gives Jonah’s message at Errant’s office so much power. Jonah identifies himself as “CapCook” and specifically uses the term “steak” when trying to catch Errant’s attention. Both his handle and that internet thief terminology are fresh in the reader’s mind, but they are long distant and faded memories for Errant and Jonah. Or, they would be, if only they weren’t reading the same piece of fiction about themselves that we are. Mind you, I’m saying fiction because it’s fiction to the reader, but it would presumably be real to the characters themselves, even if they can’t remember those events transpiring in the first place. It’s just fascinating to consider that Jonah is learning about what’s important to him and what his values are the same way that I am learning those same things about him.

Or is he? I think we’re meant to believe that the text of those past-sections are being lifted from Jonah’s personal journals, but I don’t think we’re meant to assume that Jeff Lemire’s illustrations accompany them, or that the text is laid out identically. There’s a lot that the reader can gleam of Jonah’s personality through the layouts (for lack of a better word) on those pages – like here where Jonah explains how internet thievery works: 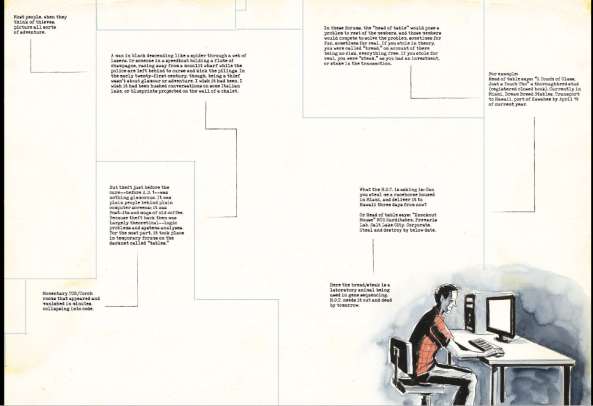 This explanation is almost schematic, laying out the steps like they’re on a flowchart. That serves to normalize the process and helps to sell Jonah’s assertion that there is no adventure in stealing. Of course, the comic book-y flashforwards suggest that there actually is quite a bit of adventure in Jonah’s future, even if he believed differently about his past.

I’m not quite sure what to make of the idea that the “comic book” portions of A.D. After Death are somehow more “real” than the “book” portions. This is a work created by two titans of the comic book industry, so I suppose it shouldn’t be surprising that that’s the medium they are electing to elevate. Maybe it’s simply a matter of understanding their audience, and all Lemire and Snyder are after is demonstrating the tension between truth (the present) and fiction (the past).