That’s not an entirely true observation. Baskin Robbins always carries 31 flavors, and even at it’s most, Marvel only publishes 5 or 6 Avengers series at one time. But I’m too in-love with the ice cream metaphor to let it go, so stay with me. Like Baskin Robbins, U.S.Avengers is an exercise in indulgences, cramming in as much fun, color, and sugar as humanly possible. This cartoonish excess is also unapologetically American, leaning in to everything that even remotely expresses that cultural identity.

The team is made up of a lot of orphans of writer Al Ewing’s previous series about an Avengers team – New Avengers. It’s the crew lead by Citizen V, a.k.a. Roberto DeCosta, and the no-longer-that-recently repurposed A.I.M. Seemingly as a sign of good faith to both the U.S. government, and the readers, that acronym now stands for American Intelligence Mechanics. Which is hilarious – even when Roberto made A.I.M. work for the Avengers, at least he let them keep the “Ideas” part of the acronym intact. An Avenger identity is one thing, but an American identity? That’s loud, and it overrides pretty much everything else.

And Ewing totally goes for broke in expressing that American identity: the heroes are immigrants, dual-citizens, culturally and sexually diverse; they’re introduced via reality show confessionals; their enemies are a thinly veiled jab at Donald Trump and the White Nationalist movement. We could probably burn two-thousand words discussing what the American identity is as expressed by this series, but I want to focus on how Ewing and Medina achieve the breathless pacing of this issue. All six heroes get a proper introduction, with pages committed to how each one of them thinks and operates on the battlefield. Plus, they take down some kind of flying volcano thing and tease both a time traveling Captain America 2099 and a new gold-skull-masked villain. It’s an almost feverish pace, and it’s shocking that it works as well as it does.

I think a lot of it comes from knowing when to slow down. Dr. Toni Ho, a.k.a. the new Iron Patriot, gets perhaps the lengthiest introduction, with her confessional spilling over into a second page. This is a great character, one that is both principled and self-aware enough to know that she’s lightly ripping off Tony Stark. She’s also a little bit aloof, and has a relationship with Aikku — all of which comes across in her interview. My favorite part of it is the smash-cut to Toni in the armor, impatiently asking: 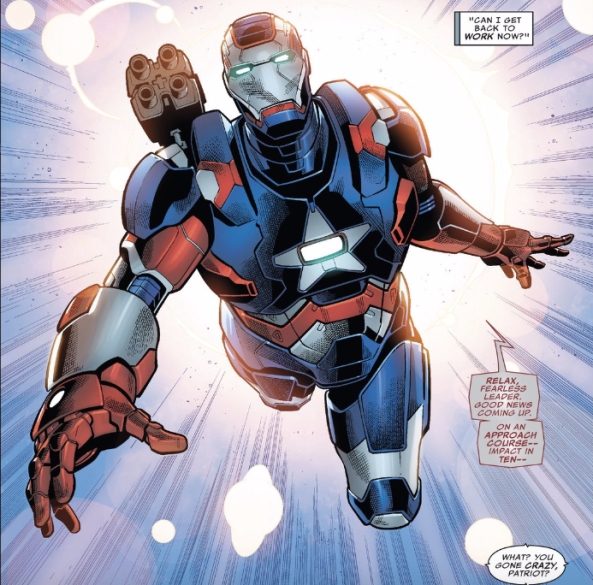 That’s followed by some chatter between Toni and General Maverick that clearly, and actively, establishes Toni’s aversion to guns (and Maverick’s attitude toward that attitude, which is a microcosm of the gun control debate). So, we’re still establishing Toni, while laying the groundwork for Maverick’s introduction in a couple pages and transitioning into Aikku’s introduction. And all of that plays out during the raid on the volcano base.

If there’s one short straw in this fist, it’s Squirrel Girl, who doesn’t really have an opportunity to do much of anything. She gets to be cute and funny and maybe that’s all we need to really get the gist of who Doreen is, but Iron Patriot, Engima, and Red Hulk all get such definitive action beats, that it’s hard not to think that she and Cannonball got the least attention of the field agents.

Sam does get a nice confessional video after the action is all said and done. It mirrors Roberto’s interview in a lot of ways – both tie their American and Mutant identities together. The difference, and where I think Sam is a more interesting character than his counterpart, is that Sam finds himself in a world where his heroes are dead. He namechecks Xavier, claiming that he had an American dream of his own, but then is only sheepishly able to assert himself as one of these U.S.Avengers. Sam is used to living in the shadow of greatness, so the idea that he might have to be that greatness going forward is totally alien to him.

And then vwwzzz – Captain America 2099 shows up! Taylor, does the insane pace of this issue work for you? How about the pastiche of an American identity we see projected by this team? Oh and if you had a big red button on your forearm that you could activate once every day and a half to do something extraordinary, what would it allow you do to and what would be the text printed on it? Maverick’s Hulk button just says “SMASH” and that’s about perfect.

Taylor: Oh man, do I have to settle for just one? I guess if I had to choose I would have a button that just read “FUGUE” that would send me into state of productive amnesia. Dishes need to be done? FUGUE. Got a lot of papers to grade or write? FUGUE. Boring meeting to attend? FUGUE. I mean, what could be better than completing all of the drudgeries of life but never feeling like you actually had to do them? Maybe not as cool as a “SMASH” button but it might make me a lot happier.

In some ways this issue feels like the product of a fugue state. As you so well put Patrick, these twenty pages are crammed full of information. Despite disseminating so much info, the issue really does break into two primary themes: Introductions of the A.I.M. team and introductions to the overarching themes of the series. While the sheer amount of information presented here is amazing, the overall message is a bit muddled.

Take for instance Toni, aka Iron Patriot. She claims that she is against lethal violence yet her suit is still chocked full of weaponry that while not lethal, still accomplishes much of the same aims as conventional lethal weapons.

These nonlethal weapons basically read like a wishlist for a riot police squad and incidentally also happen to be the same type of weapons used in the real world on protesters. So even though Toni comes in spreading a message of peace and understanding, her development of weapon tech is ostensibly the stuff governments use to keep the masses in order. These U.S. Avengers obviously are a response to to Donald Trump and fears of authoritarian government, so why is Toni portrayed as being enlightened when her very skill set would help the things she’s fighting against? This sends a confusing message where I’m not sure whether the U.S. Avengers are actually what the world needs to confront evil.

The ease with which the Avengers save the day also confounds the theme of this issue. The problems the A.I.M. members pledge to tackle in their interviews are those which happen to be the most difficult to solve. Intolerance, inequality, and hate are all things the various members mention as motivating them to be heroes. These are issues that can’t be solved by punching a bad guy or destroying their ultimate weapon. They take years, maybe even decades, of hard work, conversation, and the gradual shift in an entire populations’ mentality. In this issue though, these problems are all fixed in one page.

Just send in the Red Hulk and all of the nations’ problems are solved! Would that it were so easy to defeat the issues facing our country. Naturally, an Avengers comic needs to have explosions and battles and such, it’s what it expected of such a title. But if this title really is going to focus on current events in America, I can’t help but think a more nuanced approach to this theme is needed.

Ultimately, though, this bombast makes this issue an entertaining, if sugary, read. There’s a lot that goes into creating this tone like flying squirrels, one liners, and bright colors, but for my money what makes it the most fun comes in the closing pages. The leader of $kullocracy is a dude wearing a golden deathshead who is championing greed and a world with no principles. As far as I can tell, he is delivering this diatribe to a group of pirates, who are dressed similar to himself.

Honestly it’s hard to make any sense of why pirates and this golden skulled man are dressed the way they are and what that says about them as characters. But it doesn’t really matter so much. It’s a bit goofy but it’s also just fun. How these antagonists play into the promised themes of this series will be interesting to see and I can’t help but wonder if their appearance belies more sinister motives. For now, it helps create a bit of levity in this issue that saves it from caving in under the weight of its convoluted themes, which I appreciate.

I guess you could say it’s like a nice scoop of ice cream after large meal. Perhaps excessive, but 100% American.