Taylor: Recently, a friend suggested I watch the Sci-Fi series The Magicians. Like Gotham Academy, it’s about a group of students at a strange school who must deal with the mysterious and dangerous quirks of their institution. As I watched the first two episodes, because that was all I could stomach, it was surprising how little the show did to introduce me to its main characters, let alone make me sympathize with them. Gotham Academy, on the other hand, goes to great lengths to develop its characters because, at heart, that is the engine that makes the series go. But in Second Semester 5, this trademark character development goes out the window and with it so does the magic of the series, making it look more like The Magicians than any good comic would want.

The trial of Colton Rivera, teased a couple months ago, is finally underway! After being caught trespassing and stealing a mysterious map from Mr. Scarlet’s room, Colton is initially expelled from Gotham Academy. However, Pomeline’s mom, Anaica Fritch, intervenes on Colton’s behalf and guarantees him a hearing regarding his expulsion. During this trial new and strange mysteries are revealed and the Gotham Academy crew of Olive, Maps, and company set to work to bring them to light. The question is, will they reveal these mysteries in time to save their classmate?

Gotham Academy has always used mystery as a backdrop and it would appear that’s where it should stay. In this issue, several characters act in mysterious ways which makes it hard to sympathize with, let alone care, about what happens to them. Of these characters, Colton is perhaps the most perplexing. With him on trial, it would make sense for the writing team of Brenden Fletcher, Becky Cloonan, and Adam Archer to make us care about Colton’s plight. Instead, Colton repeatedly does thingsin this issue, like stealing maps, that make it hard to justify his continued tenure at Gotham Academy.

It’s understandable why Colton stole the map. After all, it had mysterious scribblings on it that could mean something. But when you just narrowly escaped being caught in a different professor’s office, is this really the right time to steal something from a different professor? This kind of brainless activity makes it hard to side with Colton because he’s continually making bad choices that show he really shouldn’t be at Gotham Academy. Later in the issue he also skips out on his own hearing which further demonstrates his poor choices and once again makes it hard to sympathize with the character.

While it’s clear a lot of this action takes place because it advances the plot, it shouldn’t come at the expense of character development. It is only the rare narrative that can live on plot alone. Without good character development that makes me sympathize with a character rarely do I find myself caring what happens to them later in the story much less what happens later in the story at all.

This series has always successfully relied on character development as the grease that turns the wheels and it’s clear how much that matters when it can’t be relied upon in this issue. Without a strong character anchoring issue 5, the plot is set adrift here and is often confounding. During Colton’s trial, Mr. Scarlet appears to be put on trial himself, which is something that leaves me scratching my head.

Again, the point of this exchange between Scarlet and Pomeline’s mother is move the plot forward. This is quite apparent as Maps is seen licking her lips with each nugget of intriguing clues dropped by Mr. Scarlet. But this all seems a little overblown given that this is a hearing about whether Colton Rivera should be kicked out of Gotham Academy or not. The connections between Mr. Scarlet’s interrogation and Colton’s offenses are there if I squint, but the whole scene seems so over the top and unbelievable I find myself having trouble digesting it. I’m not saying Gotham Academy can’t rely on plot alone to move its issues, but if character development isn’t going to be the focus of the issue then the plot needs to be airtight.

Spencer, my hope is that this issue is merely setting the stage for things to come later in the series. That being said, did you enjoy this issue more than I did? As always the artwork is fantastic, but I found it hard to focus on that this month. Was there anything about that which you can speak warmly about?

Spencer: I can speak warmly about Colton, Taylor…I can speak warmly about Colton. I’ve felt for the kid ever since the first issue of Gotham Academy‘s first volume, where we saw him use his sunglasses to hide a black eye. There’s never been any evidence, but I’ve always assumed he was physically abused by his parents, and Colton’s horror at the idea of his parents coming to pick him up — and his decision to run away if he’s expelled — seems to reinforce that theory, at least in my mind (and recent revelations about Colton’s crush on Kyle could easily explain why Colton’s home-life is so dire). 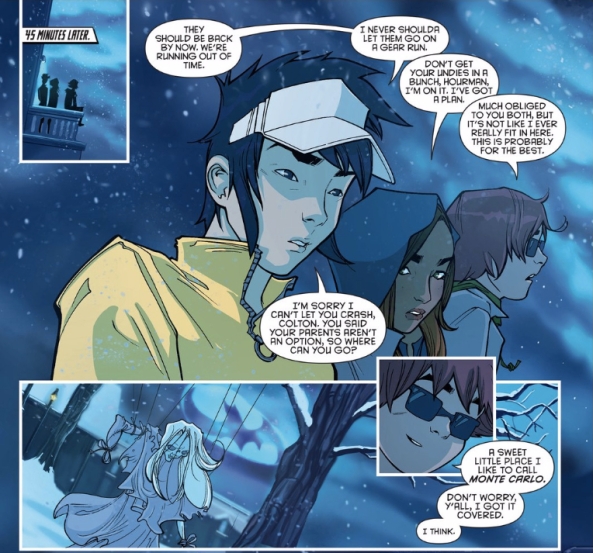 I’m not sure if Colton legitimately felt like he never fit in at Gotham Academy, or if he’s just trying to convince himself of that so that his expulsion won’t hurt so badly, but either way I feel for him. His line about running away to Monte Carlo could be glib, but knowing Colton, I can see him legitimately thinking that he can survive on his own in a place like that. All of Colton’s behavior throughout this series — the stealing and troublemaking — can be seen as his acting out because of his home-life, but also as his trying to become self-sufficient, learning to take care of himself because he’s learned (or at least he thinks) that nobody else will.

I think that’s why your calling Colton brainless and questioning whether he deserves to stay at Gotham Academy kinda rubs me the wrong way, Taylor. Colton’s not a model student by any means, but neither are Olive or Maps or Pomeline or any of the Detectives Club. They’ve all broken quite a few rules — Colton just gets caught more, and sometimes even takes the blame for his friends. If he deserves to be expelled for that, then so do they all. And if it’s Colton’s stupidity in stealing the map that makes you feel like he doesn’t deserve to remain in school, Taylor, well, that feels particularly harsh, especially coming from a teacher. High school kids are supposed to make stupid mistakes.

Of course, part of the problem here is that Headmaster Hammer’s anger at Colton is misplaced.

I apologize for reposting an image Taylor already posted, but I want to everyone to focus on panel three for a minute. Colton just stole that map from Mr. Scarlet, yet Hammer immediately yells “my map!” While our previous installment insinuated that Colton’s expulsion was a result of his years of infractions, this month the creative team reframes it as a consequence of stealing Hammerhead’s map specifically; yet, Colton didn’t steal it from Hammer, he stole it from Scarlet. That’s why Anaica Fritch is grilling Scarlet during Colton’s trail — if she can prove that Scarlet stole the map from Hammer, then it gets Colton off the hook for the crime that warranted his expulsion. I dunno; to me, it doesn’t seem fair to get upset at a kid for his stupid decision when said stupid decision isn’t even really the reason he’s in trouble in the first place. Colton is in trouble because of something an adult — and a Gotham Academy teacher, at that — has done, which seems to be a recurring theme of this series. The school really should vet their staff better.

Still, Taylor’s not wrong that it’s weird for this issue to spend so much time worrying about Mr. Scarlet. Colton’s trial would have been a perfect opportunity to dig in and do some real character-focused storytelling, but instead all this issue’s character bits are relegated to hints and subtext (I actually think there’s quite a few fun, insightful character moments in this issue, but that’s what they are: moments). The problem with this issue, though, isn’t that it’s plot driven, it’s that our mystery is missing something essential.

A mystery should be asking a question, and all of Gotham Academy‘s best mysteries have. Is there a ghost on campus? Is Olive’s mother really dead? In Second Semester 5, though, the creative team are giving us clues, and possibly even answers, before they even give us the question. We know the symbols are significant, we know they have something to do with the hidden passages (as well as Pomeline’s beloved Book of Old Gotham), but we don’t know why that’s important. At this point the kids are just trying to figure out these symbols because they’re curious, which is in character, but not exactly compelling.

In some ways this issue’s scope and ambition are its best features — pretty much the entire cast shows up, and splitting them up into separate stories across the school grounds propels the issue forward in a really entertaining way — but without a clear spotlight character or mystery to revolve around the issue loses some of its focus, feeling less like a breakneck thriller and more like it’s rushing through its plot points. I liked this issue quite a bit more than Taylor, but it still could have been much, much sharper.

(Final note: this issue provided my favorite use of Amy yet. She just stands around, making snide remarks about pretty much every single thing that happens, but not a single person in the entire issue even acknowledges her. They’re all “oh it’s Amy again, ignore her,” which is really the best way to handle someone like Amy. If we didn’t already have plenty of moments where Amy had interacted with other characters, I’d say this was more evidence pointing towards my old “Amy is Olive’s Tyler Durden” theory, but alas.)