1. an unexpected punch or blow.

Patrick: There’s not much that happens in Paper Girls that is expected, so it might be kind of hard to notice when the series is actually delivering unexpected blows. I mean, when you’re tumbling through time and space, what actually counts as “unexpected” anymore? That could be a tension killer, but under the measured eyes of Brian K. Vaughan and Cliff Chiang, a constant stream of sucker punches becomes an unsettling canvas.

Chiang gets in the first surprise blow in literally the first images we see of the issue. We’re hardly given any information at first, just a single piece of rotten fruit flying through the air. 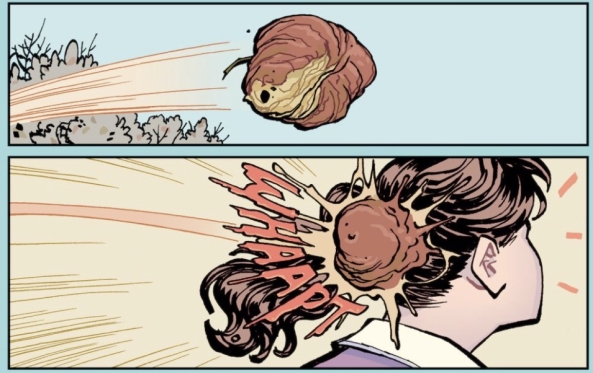 We don’t have any context for this thing. Even when we do get a satisfying WHAAPT, it’s to the back of KJ’s head, and not to her face. That sets the tone for the whole issue – a series of unexpected, unpleasant surprises.

Of course, this is one of Paper Girl‘s signature dream sequences. KJ has a nightmare — which feels more like a memory — of being harassed by some kids on the lacrosse team. They call her “kike,” and it’s not just a passing slur either – they really lean into it. In disbelief, KJ asks them to repeat themselves, and they go even further to connect that K to her first initial. It’s a thoughtlessly cruel action that becomes even more horrific when it’s examined further. KJ’s grandmother appears in the sky above her (remember, this is a dream) and immediately tries to comfort her by invalidating the K she’s just been labeled with. “Karina” she says, reclaiming KJ’s identity for her.

But that’s when the concepts of hate and identity escalate immeasurably with the appearance of KJ’s Bub’s concentration camp serial number arm tattoo.

Now we’re not talking about bullying, or even hate-speech, we’re talking about the motherfucking Holocaust. That kind of escalation is its own kind of sucker punch – one minute we’re dealing with kids being shitty to each other, and the next, genocide is in play. This gives way to a handful of other sucker punches: the kids in the dream are actually monsters, KJ’s fear of water comes from watching her cousin drown in a pool. It’s a narrative so rich with gut-dropping reversals that I barely even wince at Erin’s assertion that she likes Crankshaft better than Calvin and Hobbes.

And that’s how it is for the Girls throughout this issue: everything that appears one way is actually something unexpected. Mac’s smoke break is a great example of this, as it continuously unfolds into a weirder and weirder encounter. First she’s set upon by a young warrior woman, the tranquility of her alone time is pierced nearly the same way the issue starts.

She’s not getting hit in the back of the head, but we get the information in the same order – first the projectile, then the attacker.

But the reversals don’t stop there. This young woman has a baby of her own strapped to her back. That’s an element the Girls themselves can’t quite parse out, but that doesn’t stop them from trying to figure out when the hell they are. Of course, none of it matters because the most disruptive sucker punch of all suddenly puts Mac and K-I-don’t-swim-J in mortal danger when a giant sloth ambles up to the river’s edge.

And all of that chaos makes the clarity of what comes next all the more unsettling. Vaughan and Chiang pull back the curtain a little bit here, introducing the readers to a time traveler that’s maybe just a little too familiar for comfort. The explorer sports Apple products (albeit Apple products that are a touch too violent to be real in 2017 – just you wait, we’ll all have iBeams in a couple years), communicates with iSir (a hilariously lazy anagram of “Siri”) and belongs to an organization called AppleX. And if that’s not the intuitive portmanteau of Apple and Space-X, I don’t know what is. Doctor Qanta Braunstien gives us a setting — 11706 BCE — and even gives us glimpses into the culture of the time travelers. She’s not on the page for very long, but she’s all answers. Her final page assertion that she’s the woman who invented time travel would normally be a bombshell reveal, but it falls lifeless among all the character-based sucker punches scattered throughout the issue.

It’s sort of a deflating moment, but I don’t think that hurts the over all issue at all. Honestly, just standing on solid ground for those last four pages feels intensely bizarre for this issue. Spencer what do you think? Is that somehow a reversal of reversals? Am I being too meta here? Also, I love Chiang’s design for this hunter-gatherer woman – the blue tats on her face are rad.

Spencer: Patrick, it’s such a great design that Vaughan, Chiang, and Matthew Wilson make sure it’s the very first image their readers see when they pick up this issue.

I’m guessing there’s a very real chance we’ll talk more about this cover in 11 months when our Best of 2017 lists go up, but I love how those tattoos (or face paint?) are front and center, I love how many of the outlines appear to be created directly by Wilson’s colors, I love how the entire image is essentially only two colors, and I love how the young woman is front-and-center.

That last part is important: the warrior woman is in the center of the cover because she’s, in a lot of ways, the central figure of the issue as well. She gets no name and no discernible dialogue, yet she personifies a lot of the central concepts and themes of Paper Girls. Again, this even comes down to that killer design Patrick mentioned. Let’s take a closer look at her: 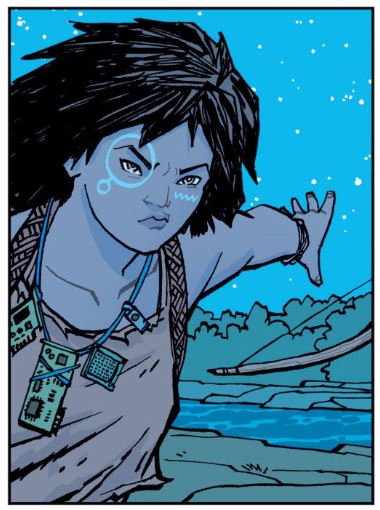 The young woman’s design is a mix of the old and new, a jumble of time periods. She’s wearing what we might imagine a traditional warrior and/or mother would wear in 11706 BCE, but she’s also got circuit boards and what appears to be a USB Drive hanging around her neck — even her tattoos resemble circuitry. On a more straightforward, literal level, she’s a living embodiment of the effect time travel has had on our titular Paper Girls. They’ve essentially been turned into living anachronisms, young women from 1988 first flung to their own future before becoming stranded in the nearly unfathomable past.

More importantly, though, the young woman represents the awkward, somewhat transitional stage of adolescence Erin and company are currently caught up in. We’ve seen in past issues how the conflict driving the more plotty aspects of Paper Girls boils down to culture clash, to adults who fear being replaced by the next generation and kids who naturally distrust anyone over 30. We’ve seen how these girls are curious about their future, yet utterly terrified of who or what they might become in it. They’re still children, but children taking on more responsibility (be it the responsibility of their paper route or the more daunting responsibility of time travel), and that’s always an awkward, difficult stage.

The young warrior woman is the same age physically, but has far more responsibility than them, being both a mother and a fighter; Naldo, Heck, Clone-Erin, and the other future teens from previous issues similarly had much more demanding, dangerous lives. This could trigger an interesting realization in these girls of the privilege of being a “modern” teenager, but I can’t even pretend to know how that’ll influence their decisions from here on out. I do think we get some interesting hints towards how conflicted they are, though.

Patrick, I cringed at choosing Crankshaft over Calvin and Hobbes too. By 1988 Calvin and Hobbes was still fairly new, but clearly represented the next generation of up-and-coming cartoonists nonetheless; preferring Crankshaft is an uncharacteristically retrogressive choice, especially in a series where teenagers more often than not balk at the past and continue to look ahead. In that respect, though, their dislike of Cathy makes a lot of sense. When Cathy premiered it was considered a somewhat radical, inspirational, perhaps even feminist comic strip, but it failed to keep up with the times; by the time Erin and KJ read it, Cathy had already become tired and derivative, and thus they reject it, just as the teenagers of Naldo and Heck’s era reject the Old Timers who have, likewise, become irrelevant.

Erin rejecting Cathy but embracing Crankshaft, then, says to me that she’s starting to come into her own and forge her own adult identity, but still isn’t ready to let go of the traditional safety net she grew up with. Or maybe I’m just reading too much into it; they are just comic strips after all (maybe Erin just likes grumpy bus drivers).

There are two more points I want to discuss before we wrap up. The first involves KJ’s grandmother’s serial number in her dream sequence. I’m going to repost the shot of it Patrick posted, but before that, I want to remind you all that KJ points out that the serial number on Bub’s arm isn’t her number. What number is it then?

11706 — is that familiar to you? It should be, as it’s the year KJ and company are currently stranded in. The catch, though, is that KJ doesn’t know that fact. Could KJ’s dream, in fact, be a bit prophetic? Her nearly drowning in the dream could just be related to the trauma of watching her cousin drown, but it’s also forwshadowing Mac’s fate at the end of the issue; KJ was even the one who left the warning for Erin not to trust her clone in the previous arc (an event we haven’t revisited yet, by the way). I don’t quite know what to make of this possibility yet, but I’m certainly going to be keeping an eye on KJ from here on out.

Lastly, I want to mention Doctor Qanta Braunstein, the time-traveling scientist who arrives at the end of the issue. Patrick found himself unsettled, and perhaps a bit underwhelmed, by her arrival and the answers she brings, but in a series like Paper Girls, I always welcome answers. That said, I don’t think Braunstein has as many answers as we think. It appears that she just invented time travel and that this is her first mission, so while she may be able to fill in some of our blanks, she’s probably just as in the dark about the Old Timers as we are.

Also, just look at her. She’s young, a woman of color, and has a punk haircut — she’s much closer in appearance to Nando and Heck or the Paper Girls than she is the Old Timers, which makes me think that she isn’t some all-knowing answer delivery system, but simply another young woman still learning and discovering her place in the world, just like Erin, KJ, Mac, Tiffany, and the young warrior woman are. I don’t know about you, but that prospect’s pretty exciting to me.