How many Batman books is too many Batman books? Depending on who you ask there ain’t no such thing! We try to stay up on what’s going on at DC, but we can’t always dig deep into every issue. The solution? Our weekly round-up of titles coming out of DC Comics. Today, we’re discussing Detective Comics 950, The Flash 16, Hal Jordan and the Green Lantern Corps 14 and New Super-Man. Also, we’ll be discussing Wonder Woman 16 on Friday and All-Star Batman 7 on Tuesday, so come back for those! As always, this article contains SPOILERS.

Spencer: I’ve been saying for a while that the weakest part of Detective Comics — whose current run I’ve been greatly enjoying otherwise — is the villains, which is probably why issue 950 is such a strong installment: the only “villains” are spoken of in whispers, as things we’ll deal with in the future. Instead, all three of this issue’s stories focus on exploring the heroes, which is where James Tynion IV’s passion clearly lies anyway.

The final story (with Eddy Barrows, Eber Ferreira, and Adriano Lucas on art) does this in a more clinical manner — in a flashback, Red Robin analyzes the entire Bat-Family and realizes that Batman’s been maneuvering them into positions of strategic importance for an upcoming war — but even that’s interesting for the way it justifies Tynion’s roster choices in-universe. The second tale (with the art team of Alvaro Martinez, Raul Fernandez, and Brad Anderson) mostly serves as a reintroduction to Azrael for any who may have missed/misunderstood his story in Batman and Robin Eternal, but the way Tynion achieves this — by bouncing Azrael against Batwing, his polar opposite — manages to be both entertaining and educational.

Without a doubt, though, the true highlight of this issue is Tynion, Marcio Takara, and Dean White’s opening spotlight on Orphan. The third person narration allows Tynion to dig deeper into Cassandra Cain’s thoughts and relationships while still keeping her at a bit of a distance, which is the whole point of her story to begin with — she feels isolated, misunderstood, and unable to express herself, even when surrounded by allies. 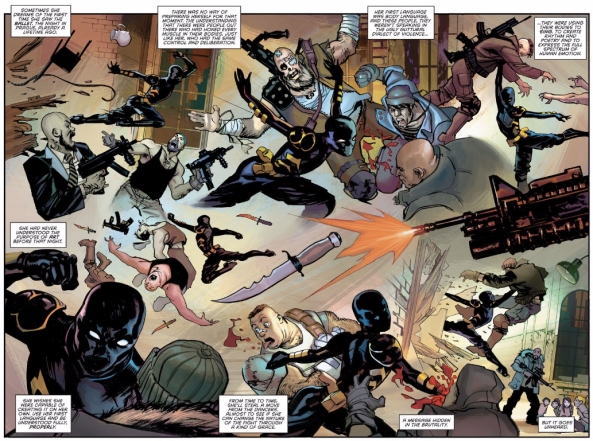 Tynion and Takara return to B&RE‘s most iconic moment — Cass at the ballet — and it turns out to be an incredibly effective method of expressing both Cass’s desires and her frustrations. My heart aches for Cassandra throughout this story, which is what makes the introduction of Lady Shiva — the only one who “hears” Cass — so interesting. In the Pre-New 52 continuity Lady Shiva could “speak” body language just as Cass does, making the deadly, amoral assassin one of the few people truly capable of understanding Cassandra. She was also her mother, so, y’know, I have a feeling that things are going to get complicated — and quite likely heartrending as well. I can’t wait.

Spencer: What makes the Rogues the Flash’s archenemies? It’s not that their numbers are one of the few things that can overcome his speed, nor even that Cold’s gun slows things down on an atomic level (in contrast to how the Speed Force speeds things up) — no, it’s the fact that the Rogues are selfish cynics, while Barry Allen is a selfless optimist. While Barry’s a hero simply because it’s the right thing to be, the Rogues’ various stabs at heroism have come from more opportunistic or self-preserving places. In Joshua Williamson and Carmine Di Giandomenico’s The Flash 16, it’s something Barry can’t quite wrap his head around, and that, more than any superpower, is what gives the Rogues an edge against the Flash. 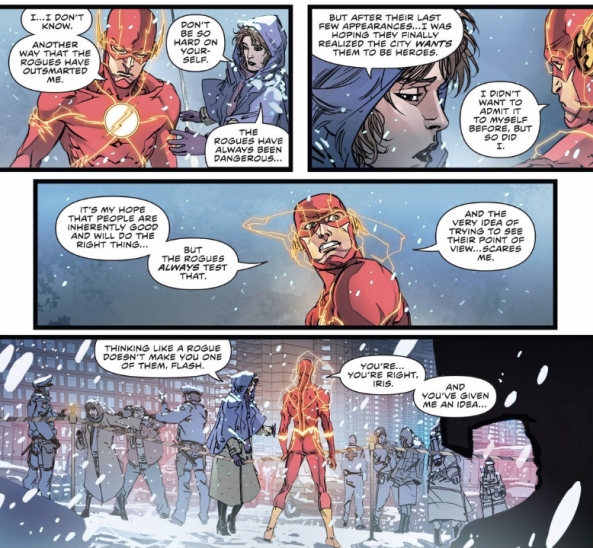 As in any good heist story, out-thinking your opponent is the name of the game, and up until his dust-up with Heat Wave, it looks like the Rogues have the Flash thoroughly out-thought. Barry’s big break comes when he tricks Mick and follows him to the rendezvous spot, but even that bit of clever thinking isn’t as spot-on as Barry believes it to be. Barry knows the Rogues will be leaving Central City together because “they’re family,” yet the only reason he’s able to outsmart Mick is because he disobeys Cold’s commands; Mick thinks he can take out the Flash and avoid doing time, but essentially hangs his family out to dry by doing so.

It’s Captain Cold, though, who shines brightest in the thinking department. 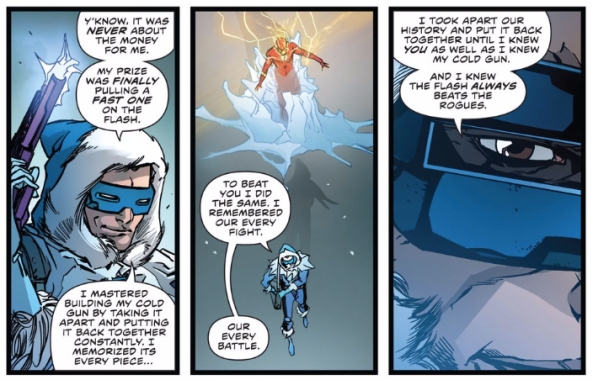 His entire plan has revolved around anticipating and countering the Flash’s every move, and the fact that he’s been able to succeed speaks to Cold’s keen analytical mind. It also paints Cold as the more objective, rational of the pair — the cynical Cold can understand people in a way the more optimistic Flash can’t — but I don’t think that’s fully true. Cold already misreads Barry when he claims that he thinks he’s better than the Rogues, and I’d bet he’s underestimated him in other ways, too. Maybe that’s why Flash and the Rogues are locked in such a never-ending conflict — the Rogues feel the need to show up the Flash for his perceived superiority complex, while the Flash just wants to see the Rogues change their ways but can’t catch onto the fact that they’re exactly as good (or bad) as they want to be. It’s a sad dynamic, but man is it compelling. 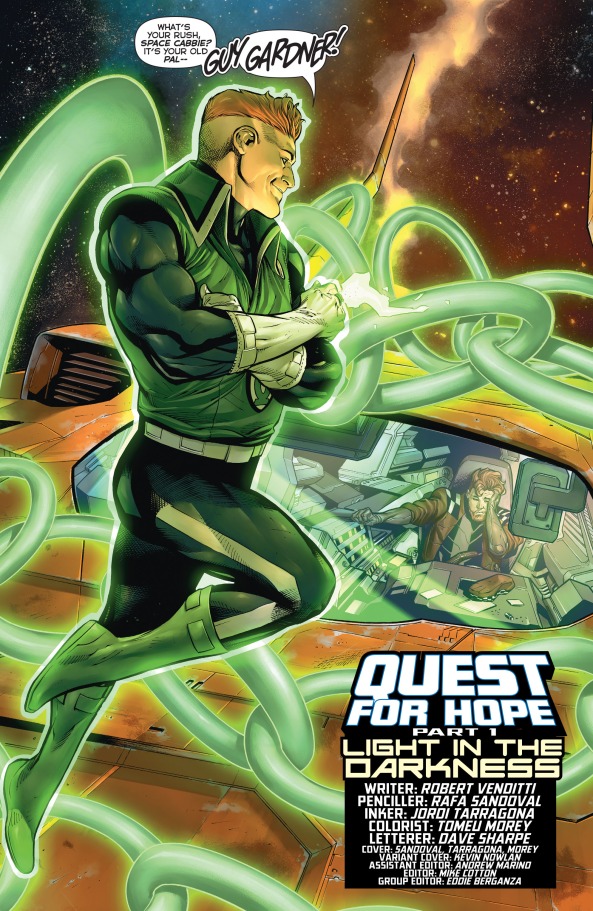 A trademark of Sandoval’s throughout Hal Jordan and the Green Lantern Corps is his slanted sliver panels. There are more traditional page layouts throughout the issue, but Sandoval also draws those slanted panels, as if the action is wedging itself into the story from elsewhere. 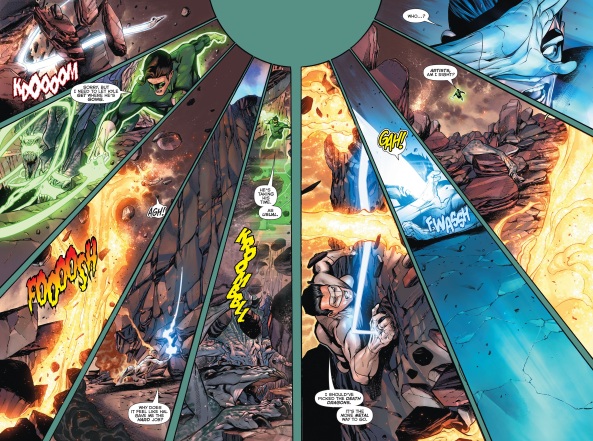 Maybe it’s because it’s a Green Lantern book and the color spectrum is always on my mind, but these panels often remind me of fractured light through a prism. This was most evident in the spread where Kyle Rayner and Hal Jordan fight their respective battles. It seems like there should be another panel in the focal point of that array though. Robert Venditti gives us some fun banter between Kyle and Hal, but Kyle seems a little too self-aware to me. The way he was cracking wise in a team-up read a lot like Dick Grayson.

Mark: It’s fun to track Kenan Kong’s growth over the first eight issues of New Super-Man. Starting off as your stereotypically snotty teenager, Gene Luen Yang and Billy Tan have done a remarkable job of slowly shaping Kong into a true superhero. The rough edges haven’t been entirely smoothed, but New Super-Man 8 bring Kong closer to encompassing the true compassion and empathy of the best Superpeople.

But the big reveal at the end of the issue is the return/reclamation of Ching Lung. He’s a character I’m not familiar with, but who goes back to Detective Comics 1 in 1937. Not surprisingly, given the times in which he was created, Lung was your typical Yellowface/Asian Peril villain of the 1930’s. It’s interesting to see Tan break from his usual style to faithfully recreate the character here. 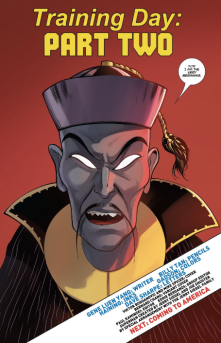 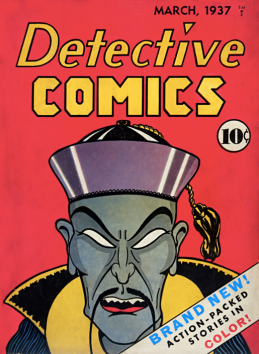 As Yang appears to be positioning Lung as the genesis for all of DC’s superheroes, his appearance marks a turning point of sorts for the book. So far New Super-Man has forged its own path in the DC Universe, but, just like Steve Orlando and Fernando Blanco have worked to redefine and update previously embarrassing gay stereotypes into more fully formed characters in Midnighter and Apollo, it’ll be exciting to see where Yang takes Ching Lung.