Taylor: When you look at where the genre of superhero comics comes from, it’s unwise to overlook the influence of pulp fiction. Pulp fictions were serialized stories printed on crappy paper that told stories ranging from the bizarre to the terrible. While it’s easy to dismiss these stories and their authors, they had an undeniable influence on generations of writers to come. While the quality of pulp fiction may be suspect, there’s no denying the stories were innovative and daring. And even though the monthlies we read nowadays are printed on better paper, it’s always fun to look back and pay homage to these stories that influenced so much of our modern pop culture, just as is done in Wonder Woman 16.

This issue is the start of the “Godwatch” arc and sets the table for Diana’s future enemies. Veronica Cale is the owner and creator of a powerful tech firm when her daughter is kidnapped, in a sense, by the gods Phobos and Deimos. With her daughter threatened, Cale agrees to help gods steal Diana’s memories using a robot she has created. This plan fails when Diana and the the Chimera destroy Cale’s robot and in the process kill her friend and partner Adrianna.

The death that Adrianna suffers is as bizarre as it is horrifying. In order to steal Diana’s memory and thereby the location of Themyscira, Adrianna links her mind to a robot body. When this robot is destroyed by the Chimera, which was provoked into attack, Adrianna’s brain is destroyed as well. This is graphically portrayed by Bilquis Evely who spares no detail in showing Adrianna’s suffering. 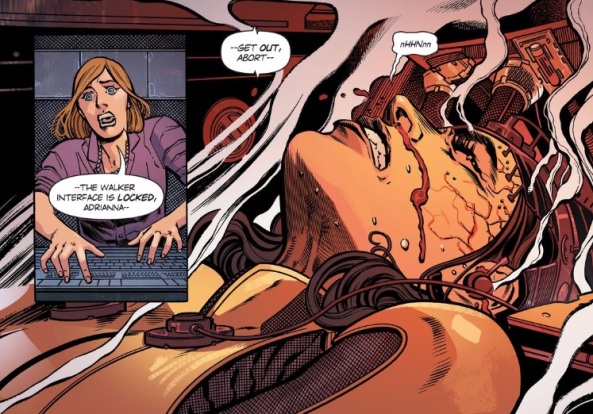 The blood pouring from her nose, the veins popping from her head, and the smoke coming off Adrianna’s head as her brain is literally frying are all grotesque and over-the-top in their depiction of her pain. While violence isn’t really my bag, there’s something amazing about this panel. It’s all so sensational that it verges on parody if it weren’t so disturbing. Instead, this scene seems like an homage to the same pulp stories that promised to astound their readers with shocking stories previously unheard of. It doesn’t hurt that this panel also cashes is on the old, pulpy trope of man vs. machine.

While just one panel such as this could just be the whim of an artist looking to excite his or her reader, similar panels seem to suggest that this is a purposeful choice on Evely’s part. When Izzy, Cale’s daughter, is kidnapped by Phobos and Deimos she is transported to Tartarus. Oddly, her body is left behind in the corporeal realm unharmed…with one exception. 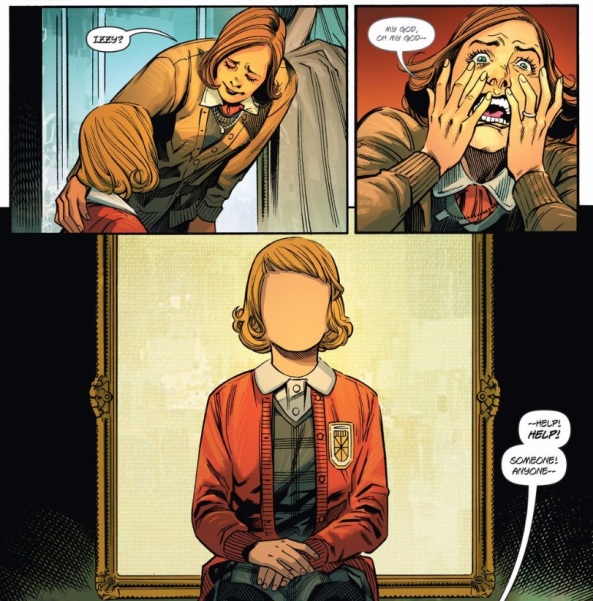 Yes, poor Izzy’s face has vanished as a consequence of being taken hostage. This reveal seems like something ripped straight from the screens of a Twilight Zone episode and it doesn’t take too much imagination to envision “The Girl Who Lost Her Face!” plastered across this panel. Once again, we have an over the top reaction in the teacher’s panicked reaction which emphasizes the pulpy quality of this issue. Aside from being an homage, it’s fun how Evely includes the blank canvas in the background behind Izzy to emphasize her facelessness. A bit gauche, perhaps, but it’s perfect for what Evely is doing here.

For all this flamboyant artwork, this issue does have heart to it that hearkens to possible themes in the upcoming event. It’s clear by issue’s end that Cale is going to be Wonder Woman’s primary antagonist in the coming issues and early on it’s clear what her beef with Diana is all about. 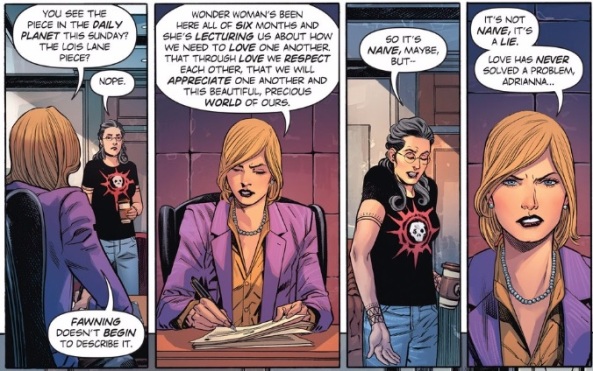 Cale has a heart of stone and sees love as a useless emotion that gets a person nowhere. As she so astutely points out, this stance stands in stark contrast to the values that Diana holds dear. The genius of this issue and the story Greg Rucka has written here is that Diana’s love and understanding are the very thing that gets Adriana killed. So that Chimera I mentioned earlier was previously defeated by Diana and has been put in a zoo. There, it becomes clear the creature is actually a huge softy and spends its days chasing butterflies. 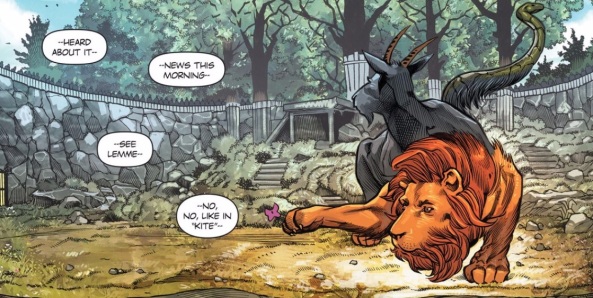 Diana recognizes this in the Chimera and understands how its confusion leads it to lash out. Because of this connection, the Chimera destroys Cale’s robot when it attacks Diana while trying to steal her memories. In this way, Diana’s act of love actually leads to the death of a person. Diana’s not guilty here and Adrianna certainly isn’t innocent, but it’s a weird area to be in where love causes the death of a person.

Mark, what did you think of this issue? Diana isn’t really in this issue that much at all. Good move or not on the creators part? Also, what are your thought on Phobos and Deimos? Do you find them to be convincing villains or are evil twins passé?

Mark: I’ve been making similar connections between pulp fiction and the current successful runs of DC books like Superman and The Flash, but up to this point I hadn’t really considered the pulp influence on Greg Rucka’s work on Wonder Woman. But while confections like Superman are eager to embrace pulp without irony, Rucka is much more interested in using the iconography of Diana Prince to examine broader social issues. This characteristic, to my mind, makes Wonder Woman unique in the current DC line-up.

And while it’s technically true that Wonder Woman is sidelined for the much of the issue, her presence isn’t missed too much — a rare feat in eponymous books. It might have something to do with the fact that Adrianna is the spitting image of Diana in street clothes, but it’s more likely that the extensive time dedicated to following Veronica Cale adds additional information and context to “The Lies” while also providing the inciting incident for a whole new arc. From “The Lies” we know that Cale is still searching for Themyscira about five years from the events of Wonder Woman 16, and that Adrianna is still alive. That the issue does dual work laying the groundwork for a new arc while illuminating details about a previous arc is an impressive feat that further cements Wonder Woman‘s status as the only double-shipping DC title to take advantage of the increased frequency for narrative gains. 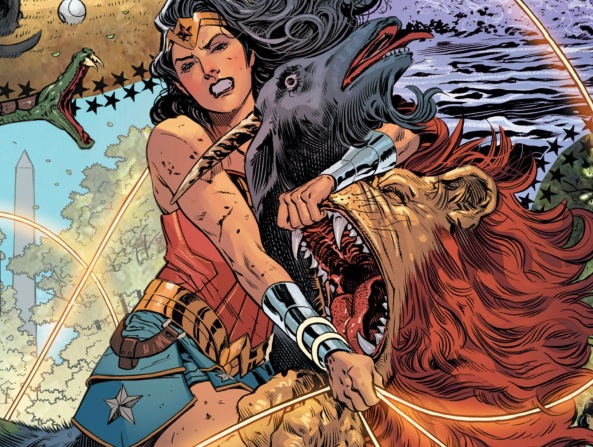 I think it’s too early for me to make a judgement on the usefulness of Phobos and Deimos just yet, but their presence here is notable outside of their inciting actions because it continues Wonder Woman‘s limitations on the roles men play in influencing Wonder Woman’s motivations. Outside of the opening issues of “The Lies,” Rucka and his collaborators have not been particularly interested in continually exploring a power dynamic where men wield control over women. When almost every new would-be prestige TV drama features graphic violence by a man against a woman, such violence becomes a played out narrative tool. It’s quietly groundbreaking that the Wonder Woman creative team has built-out a Wonder Woman book with the major influencial characters of note being almost exclusively women.

These even-numbered issues have distinguished themselves from the odd-numbered by maintaining a lighter, more playful tone, and even moving into a new arc that begins with someone’s brain getting fried that distinction holds. This is a sunnier Wonder Woman, enjoying the halcyon days of her hero-dom. As we watch Diana’s past unfold and see echos of her actions take form in the future, Wonder Woman continues to be one of the richest experiences DC has to offer.