Today, Spencer and Drew are discussing The Wicked + The Divine 26, originally released February 8, 2017. As always, this article contains SPOILERS.

Spencer: Set in the aftermath of Ananke’s death, “Imperial Phase (Part 1)” has been an arc all about figuring out what to do next. Last month’s cliffhanger finally presented a tangible threat in the form of the Great Darkness (or at least some of its agents), but if you thought that’d be enough to unite the Pantheon against a common enemy, you’d be sadly mistaken. The Wicked + The Divine 26 finds these gods as divided and lost as ever…and perhaps suggests that’s the way they’re meant to be?

Baal, Amaterasu, and Persephone save Minerva and Baal’s family from the Great Darkness before rounding up the rest of the Pantheon for a War Council. The group is divided on how to handle the situation: Baal, Amaterasu, and Minerva want to throw everything into fighting the Darkness; The Norns, Woden, and Dionysus want to study all relevant threats and information before deciding how to proceed; Sakhmet, the Morrigan, and Baphomet want to “do what thou wilt” (a.k.a. anarchy). It’s up to Persephone to cast the deciding vote, and she chooses anarchy, claiming that the Pantheon “aren’t here for any reason,” and complaining to Baal that, under his leadership, nothing’s changed since Ananke’s death.

While my actual choice would probably fall somewhere between Baal and Cassandra’s, I can’t help but think that Persephone might be right. Anarchy is a selfish answer, but would it really help either of the other causes to throw the full weight of the Pantheon at them, even when many of the members would be uninterested in or unsuited for a particular path? It appears that Baal and Amaterasu are the only ones who can actually hurt the Great Darkness right now, and Woden himself points out that Minerva is the only god outside the “Study” group who would actually be of any use to their cause. Moreover, Persephone isn’t wrong about the way Baal runs the Pantheon. 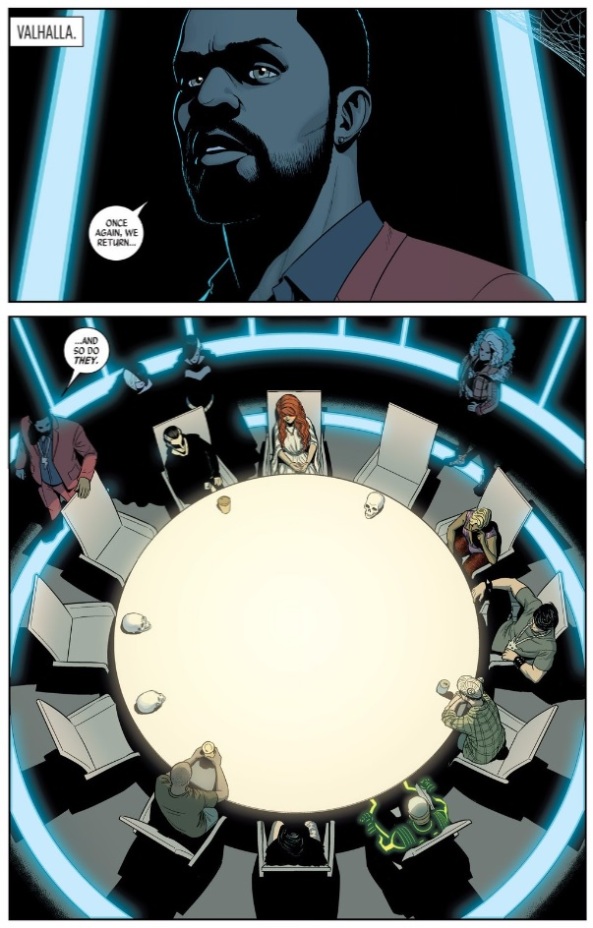 Baal might as well be Ananke on this page, opening the meeting with a vague, ominous statement as the rest of the Pantheon gathers around a table in full ritual-mode (their seating arrangement here even matches their positions on the logo-wheel). He kept information about the Great Darkness to himself because Ananke told him to, even at a time when the Pantheon needed to be more honest and transparent than ever. A little anarchy might be just what’s needed here in order to figure out how to move forward in a way that best suits the Pantheon, not Ananke’s vision of what they should be. We can only hope it’s the best choice for the world too.

As much as this issue revolves around the Pantheon as a whole, it’s clear that many of its developments spring directly from Persephone and her current state of mind. I won’t dwell on it too long, but I do want to point out that, in our discussion of issue 25, Drew and I speculated that Persephone is likely the Great Darkness herself, and it’s interesting to see Kieron Gillen and Jamie McKelvie elaborate on some of our points (and outright confirm others). This month we learn that Persephone’s powers feed the Great Darkness instead of hurting it (which Amaterasu casually suggests could make Persephone a “baddie”), and Baal’s explanation of the Great Darkness (it “consumes one light at a time”) sounds suspiciously like my speculation that Persephone’s symbol is the skull, and that it’s taking over the dead gods’ places on the wheel.

Perhaps most prominently, this issue continues to paint Persephone as an outsider even amongst the Pantheon; just look at the above image, where Persephone doesn’t have a seat at the table and is instead forced to stand. Even the fight sequences establish this:

The action sequences this month are some of McKelvie and Matthew Wilson’s most dynamic, but they still conform themselves to McKelvie’s square, grid-like panels. Persephone is the only character who breaks this rule by bursting out of the panel and into the gutter; in this situation she also bursts directly out of her panels and into the panels containing Baal’s family. She clearly feels awkward around them, like she shouldn’t be a part of Baal’s life; if her shy body language around them didn’t betray it, her later break-up with Baal would have.

In fact, this month Gillen and McKelvie don’t just frame Persephone as an outsider, but perhaps as an invasive presence amongst the Pantheon. 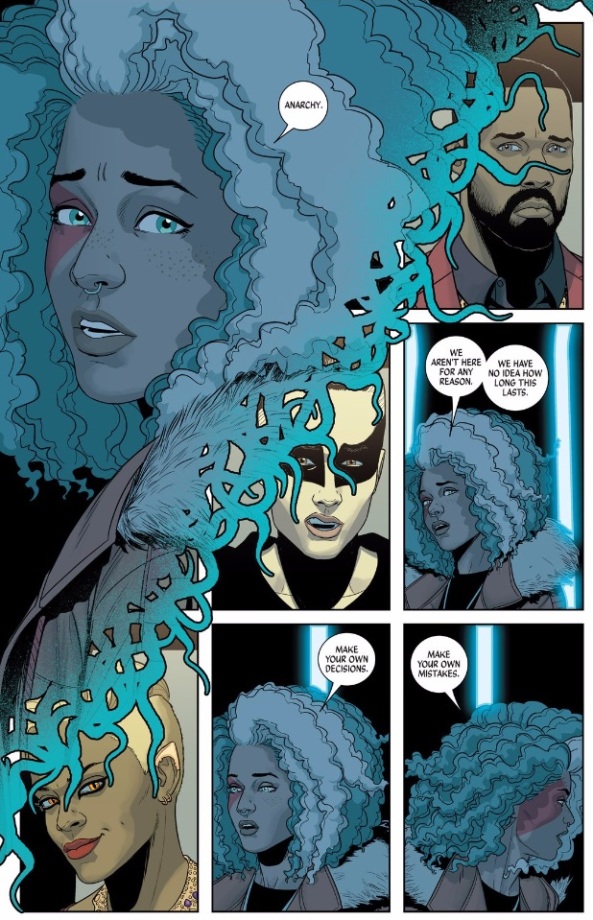 Persephone’s deciding vote encroaches on the page like vines eating it away, landing blows to her closest friends amongst the Pantheon (other than Sakhmet, who it only amuses [always a bad sign]). Maybe Persephone really is the Great Darkness, her very existence chipping away the stability of the Pantheon. Or hey, maybe she isn’t, but it seems clear that Persephone is starting to think of herself in this light. She feels toxic to Baal, so she breaks up with him, and despite her relative invulnerability, crashing her bike into a wall still appears to be a self-destructive act. I don’t think Persephone likes herself very much right now, and that can’t be a good thing.

Drew, what do you think about this one? I didn’t even get to dig into the reveal of Dionysus’ asexuality or the hints of Cassandra’s relationship with the other Norns; any thoughts about those? This issue was also jam-packed with fun character interactions and subtle, but meaningful details — I think my favorite was Sakhmet cradling the skull that represented Lucifer’s spot at the table in her hand as she suggested anarchy, as if she knew Luci would approve. What was your favorite detail?

Drew: Actually, that those skulls were there at all might just be the biggest detail for me — they make it clear that those empty seats at the table aren’t waiting to be filled. An empty chair can certainly have that same impact given the right context, and this scene certainly has context in spades, but by putting the skulls there, Gillen and McKelvie not only press the issue, but draw explicit connections to Persephone (who, if I’m not mistaken, is wearing three pieces of skull jewelry throughout that scene). In that way, the takeaway may not be that Persephone didn’t have a seat at the table, but that she had three.

And, as it turns out, three is an important number in this issue. The pantheon votes on three different game plans, and each option gets three votes (excluding Persephone’s tiebreaker). Which makes the nine-panel grid feel like a straightforward choice:

Obviously, it works on that utilitarian level — nine panels for nine characters — but also kinds of lulls us into ignoring some of the other features of the nine-panel grid. Spencer already detailed the impact breaking that grid can have (especially after seven uninterrupted pages of it), but I’m interested in the capability of the grid to subtly emphasize the fifth panel, literally enshrining it at the center of the page. Just look at the very next page:

I know, I know — I’m cherry-picking examples to support the “Persephone is the Great Darkness” theory, but it’s hard to deny that that middle panel is the turning point of this page, leaving the pantheon in stunned silence before Cassandra shrugs it off. But it’s not a convincing shrug. The top row poses the question of whether Persephone should get a vote, and the second presents the reasons against her voting. The third row should present the reasons why she should, but Cassandra can’t present a case more compelling than “we owe her.” It’s not at all an answer to the question Amaterasu poses, which means we’ll almost certainly be considering it again.

Circling back to the votes, the notion that Persephone might actually have three seats at the table — and thus, three votes — takes an interesting turn here when we consider how the votes might have fallen were Lucifer, Tara, and Inanna still alive. That is, I kind of think the vote still would have been deadlocked (I’m inclined to agree with Sakhmet’s assessment that Luci would have been pro-anarchy, I think the case would be made that Inanna would have agreed with Baal, and while I can’t speak with as much certainty about Tara’s choice, I can’t imagine she would blindly trust Ananke’s plan after what she did, even if “what she did” kind of presupposes Tara’s death). In this way, it might be best to see Persephone’s “three” votes as backing an entirely different, but unnamed plan. As Dio points out, everyone is now free to pursue their own ends — whether we know what those ends are or not.

Which I guess brings me to my other big takeaway from this issue: just how self-interested the gods are. Never mind that “let’s all do whatever we want and not worry about anyone else” wins the vote here, even the more sober, selfless options seem to be motivated by self-preservation. Minerva’s reason to fight the Great Darkness: it poses an immediate mortal threat to her. Though Baal doesn’t say it outright, protecting his own family is likely part of his motivation. Even Cassandra, who, while not asexual, does regard sex as a kind of indulgence that her duties can’t afford her, ends up taking an hour for herself. It’s hard to know if that’s the right choice, but Gillen and McKelvie certainly make it a human one.

As always, Spencer, I didn’t get to half of the questions this series raises, but I suppose that’s what comments sections are for. What’d I miss?