Patrick: In our write-up of East of West 16, over two years ago, Drew made the observation that this series “is no fun, but it might be important.” I have long considered “no fun” to be one of the more damning criticisms of this series. For all of its interesting, impactful ideas and harsh truths about human nature and the corrupting influences of power, greed and faith, East of West seldom has an enjoyable narrative to buoy its grim headiness. I now believe this to be the point. With pages and pages of static boardroom scenes, we are meant to feel the excruciatingly dull banality of evil. Writer Jonathan Hickman and artist Nick Dragotta only allow their creation to be truly exciting when the good guys actively resist the powers oppressing them.

The cold open of issue 31 re-establishes that diplomacy of extreme boredom. President LeVay bargains with Archibald for more resources to secure her boarders and quell dissent in her country. This scene is literally just a phone call. Archibald makes his decision with only his assistant in the room, so it’s not even like he’s juggling political pressures or trying to appease multiple powerful factions. Even LeVay’s appeal to his religious convictions is casually slapped away in favor of Archibald dramalessly maintaining the status quo. Make no mistake of this: LeVay is a horrible leader, willfully marching her people to the End of Days, and she’s able to re-up on weapons because doing so is following the path of least resistance.

Ah, but therein lies the twist: resistance. We get a flashback a couple pages in that shows LeVay personally going into the streets to execute rebels. Even with Dragotta’s sepia-esque muted coloring, it’s a stomach churning sequence, one that depicts the horrors of a leader that sees the lives of her followers as completely expendable. 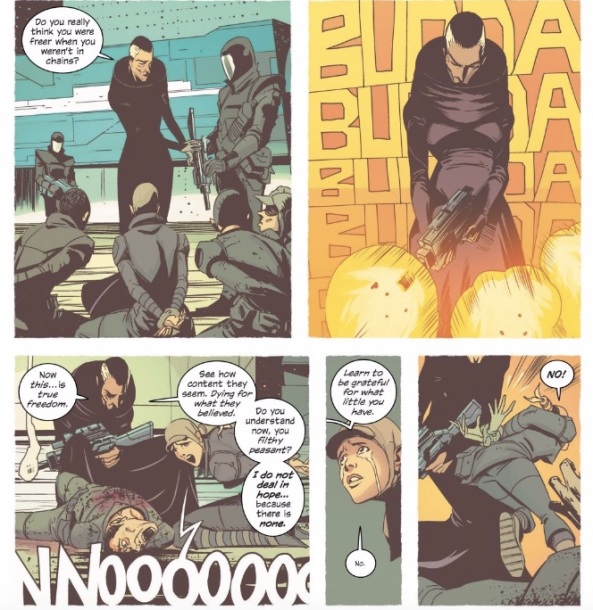 Issue 30 kicked off the “Apocalypse: Year Two,” so it’s entirely possible that there new readers picking up this issue as their second after the easy entry point last month. For them, this is an important inciting incident for the band of rebels we will follow throughout the rest of this issue. But for longtime readers, like me, it’s a non-existent editor’s note back to issue 8. Shelby and Taylor wrote about that issue in December of 2013, and back then, we were more concerned with LeVay’s blind faith in executing on the mandates from the Horsemen. That issue has its own flashback to LeVay cutting a deal with those Harbingers of the Apocalypse, but that flashback is to events that we never saw unfold elsewhere in the series. It is, for lack of a better term, “ancient history.” But this moment, when LeVay guns down rebels to make a point, is not that. It is recent history — something that we saw happen. Here’s the page from issue 8. 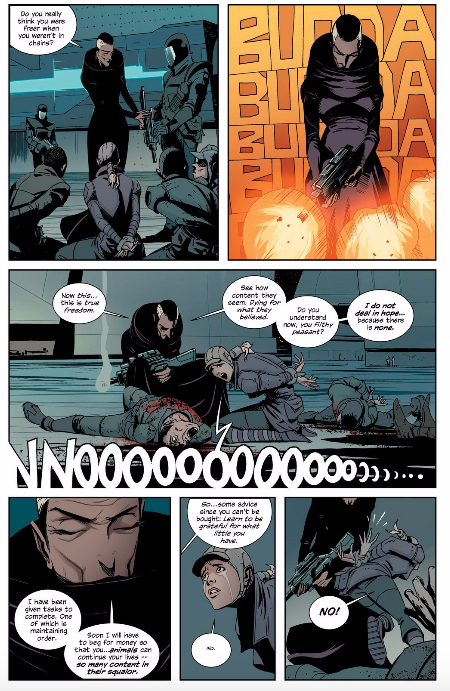 Dragotta has added a handful of new drawings, and reworked some of the layout, but a lot of the images are faithfully reproduced. We’ll spend the rest of the issue following the woman who survives this encounter as she and her team execute a terrorist attack on the White Tower, but I think we need to spend a little more time talking about what it means that story is set up with a flashback to events we’ve already seen.

The whole idea of exploring the “banality of evil” isn’t to take evil down a peg, but to illuminate that we see evil every day. That’s an important concept to wrap your head around: historical events that shape the world are not just scenes that took place in a book or a lecture, but are events that happen in real time. Seeing that LeVay’s actions from three years, and 23 issues, ago have consequences in a contiguous history reinforces the idea that we are not living in a post-historical world.

It is perhaps fitting, then, that the revolutionaries stage an attack whereby they highjack a flying vehicle and pilot it into the White Tower, which is an evocative portmanteau of White House and Twin Towers. Hickman is playing with some loaded-ass images here, but it’s clear that both he and Dragotta are more energized when showcasing these violent acts of rebellion. Dragotta’s moment-by-moment storytelling is so tight and kinetic; the long boring stretches of the boardroom replaced with rhythmic action. 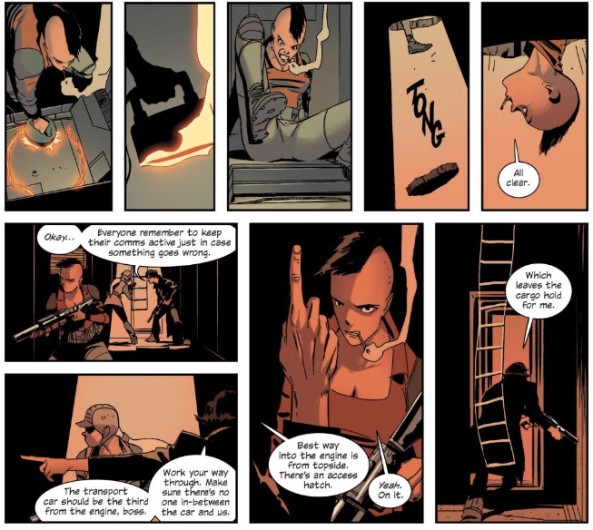 It’s so clear and concise and — dare I say it? — fun. Dragotta’s panels-per-page count skyrockets during the heist. The selection above comes from a page with 12 panels! The motion and excitement of revolution are undeniably more impactful that the evil motherfucker who maintain the status quo.

Ryan, I understand that you are one of those “new readers” I referred to above. I’m curious how you respond to LeVay’s villainy — I’m guessing it comes off as a little cartoonish. Am I right? Her journey getting to this point is heartbreaking and stomach churning in equal measure, but most of that is off-the-page here.

Ryan D: Well, Patrick, I was a new reader until I read every issue of East of West over the past two days, and I find it interesting how you used the word “villainy” for LeVay. After absorbing so much of Hickman’s world in such a short span of time, I think I find myself a bit numb to the idea of villainy in a setting so violent and tumultuous. The best of characters sport a noble yet amoral Western-style frontiersman mind-set, while the worst are immoral and opportunistic. Almost every character here is driven only by their own self-interest.

As for LeVay herself, the word “nefarious” comes to mind. Her path through the series has been such a ruthless one that I cheered when she almost fell victim to mob justice a few issues back. Is she any worse than Archibald? Maybe not, but she does not have anywhere near as much charm as the very Southern gentleman, making her even less likable. The confusing part about these megalomaniacal characters who hold no other agenda higher than their own, often at the expense of their constituents, comes when one considers their relationship to their “religion.” How much, if any, does LeVay buy in to the apocalyptic planning, or is it all just a means to further her end? Ultimately, her villainy may seem bombastic from an outside perspective, but at this point I hardly notice her ruthless application of social Darwinism. If Hickman scaled down her villainy, she might not function nearly as well in the preposterous line-up of characters we have here.

I find the most intriguing parts of both LeVay and Chamberlain to be their relationships with their seconds in command: Doma Lux and Constance Lee, respectively. It is rewarding to me seeing characters who behave, morally, like monsters actually relating to their most trusted subordinates with a genuine interpersonal relationship. We see the shape of a nurturing dynamic in one panel as LeVay and Doma share an indulgent and congratulatory drink, knowing that a few pages before, LeVay murdered dissidents personally, with her own hand. Whether one finds this Hickman title to be fun or not, one must admit he always has a knack for writing characters

Speaking of relationships, I found the impromptu one sparked at gunpoint in the last two pages of the comic to be intriguing, the one between the “freedom fighter” and her captured soldier: 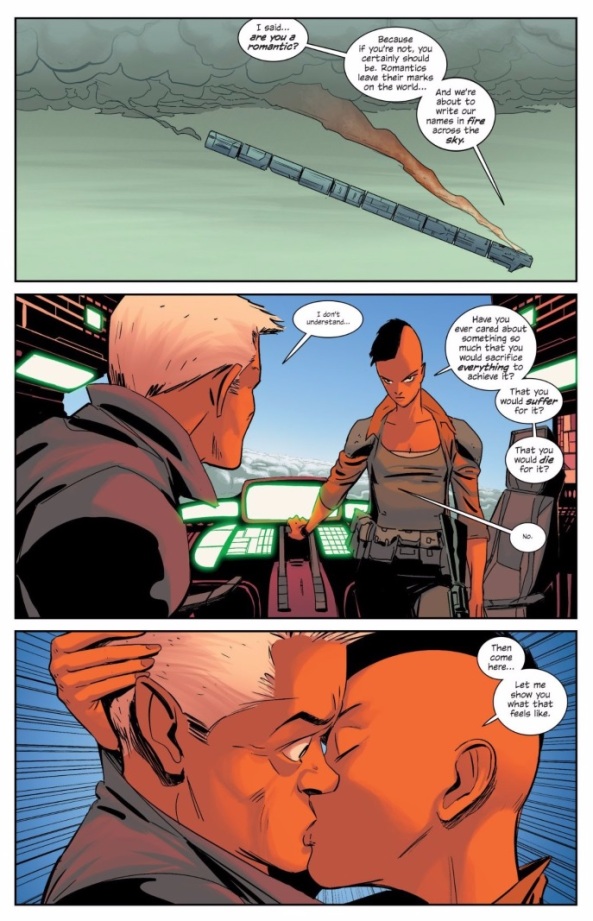 “Are you a romantic?” she asks, as she plummets the grav-train towards the white tower, and I was reminded of a sublime quote by F. Scott Fitzgerald: “…the sentimental person thinks things will last — the romantic person has a desperate confidence that they won’t.” While this fits perfectly with the woman about to give her life for her cause in an act of guerilla warfare (as Patrick said, a very tricky notion to navigate in our current geo-political climate), and also plays off of LeVay’s toast to Doma to celebrate the weapons delivery, I thought the quote to be quite relevant to the dynamics of the series as a whole. The main two groups in the title are, of course, pro- or anti-apocalypse, a group looking to wipe the slate clean versus one trying to hold on to the flawed world they have now. Older characters like LeVay and Archibald then become interesting studies, because though they are “Chosen” and helping move the machinery of the End of Days, they are also the two characters most prone to wax on about the good ol’ days. Anyway, I hope the next issue starts off with that soldier in the page I posted having his life flash before his eyes. I want to know that man; I really do.

When it was first pitched to me that I could write about East of West 31 without catching up with the story, my first thought was, “It’s a Hickman story! That sounds impossible.” And while this series indeed features Hickman’s telltale depth and sprawling, overlapping plotlines and complex characters sporting even denser motives, this did turn out to be a surprisingly good issue for a new reader. The focus on the action makes it accessible while also doing an incredible amount of world-building while utilizing minimal dialogue. When Hickman lets Dragotta off his chain to carry the story visually, the results come across as kinetic and visceral. If you are jumping in now, be prepared for more of the title’s trademark “banality of evil,” but honestly, be excited for it. There are really big events underway, and this issue shows — if nothing else — that when the events happen, it’s fun and spectacular.