Look, there are a lot of comics out there. Too many. We can never hope to have in-depth conversations about all of them. But, we sure can round up some of the more noteworthy titles we didn’t get around to from the week. Today, we discuss The Fix 8, Jughead 13, Slam 4, Teenage Mutant Ninja Turtles Universe 7, and Outcast 25. We discussed Belfry on Friday and Curse Words 2 on Monday. As always, this article contains SPOILERS.

Drew: It’s easy in any comic to only notice the flashiest parts — the cleverest twists, the most intricate artwork, the most eye-catching colors — which means more fundamental elements, the nuts and bolts that actually make a comic series work, often go overlooked. We work hard to champion those less-celebrated elements, but popular comics discourse leaves so much on the table, we can’t possibly pick them all up. Case in point: while we’ve managed to talk a bit about how the moment-to-moment choices made by The Fix artist Steve Lieber have developed this series’ signature sense of humor, we’ve yet to talk about the idiosyncratically old-school lettering by Ironbark.

And it really is old-school. In an age where virtually all letterers work on computer, it’s easy for traditionally inked artwork to clash with super-clean lettering. Not so with The Fix, which finds Ironbark picking up some of Lieber’s inking style (particularly the occasionally rough-hewn panel borders), incorporating it into caption boxes. Indeed, just about every element of the lettering seems designed to feel like it was done by hand, making it feel of one part with Lieber’s artwork. There’s the lumpy speech balloons, seemingly drawn around pre-lettered text, and even the occasional break in the inked artwork, as though the balloons had been inked first and given a thoughtful berth by a careful inker:

That’s to say nothing of the lettering itself, which Ironbark packs with little inconsistencies and collisions to impart a truly hand-lettered feel. This is maybe a bit less remarkable if it actually was hand-lettered (though that would be remarkable in and of itself), but I suspect that this was all done on a computer. Either way, it blends seamlessly with the artwork, making this comic feel like something of a time-capsule, even as the story couldn’t be more modern.

Taylor: Ryan North has come to be known for is the sub-text that accompanies each page of every comic he writes. This technique developed when North would include an alt-text for every digital comic he put out for his excellent Dinosaur Comics series. New readers of North’s might take this to be a gimmick, but he’s so good at making these notations funny and self aware that the seasoned reader knows some of North’s best jokes lie here.

While this is certainly true in Jughead 13, it’s this same attention to detail and small laughs that make the issue a success. As Reggie, who has been appointed king for a month due to a lost bet, starts a band, jokes abound the experience. The best of these detailed jokes comes when we get to a page of the song Jughead wrote for Reggie’s band.

Here, as in the subtexts to each page, you’re rewarded when you take the time to read all of the tiny text. One of my favorite things on this page (and there are many) is the fact that Jughead likes to eat bone marrow, the fact that Jughead knows hair is not digestible, and a joke about a hen and chick being reunited in Reggie’s belly. All of these jokes are brilliant, and it’s amazing that North has such a talent he can literally throw them all onto one page. Reading the music gives way to further laughs as it’s clearly apparent this song will be bad. Almost every note is the same and at one point there’s “no beat or anything.” You could easily skip over all of these jokes to get on with the story in this issue, but frankly, you’d be missing out the best part.

I am your father.

Darth Vader, The Empire Strikes Back

Drew: This moment is so well-known, it’s hard to really remember what a killer twist Vader’s climactic revelation is. It defies everything we think we know about the character, but it somehow feels right. Luke’s absent parents never felt like a plot point, but in hindsight, the references to fearing that “he has too much of his father in him” seem like perfect foreshadowing. By all accounts, that’s more luck of some clever retconning than long-gestating plans, but however it came about, that twist answers a question we didn’t even know we had. With Outcast 25, Robert Kirkman and Paul Azaceta achieve a twist so similar, it actually hinges on the exact same words.

Oh right; Kyle Barnes has a dad. Of course his identity should be important — we’ve already established that whatever powers Kyle has are hereditary — but it had somehow never occurred to me. Kyle was raised by a single mom (you know, until he went into the foster system); I just took that at face value. But the reveal of Kyle’s father is really only half of what makes this reveal so thrilling. The other half is seeing this mystery man show up and start pancaking the possessed like some kind of exorcising Wolverine.

Moments this badass are so rare in this series, where even Kyle’s most heroic moments have been messy and unsure. It can’t help but prompt the question “who is this guy?” which, of course, Kirkman has the perfect answer for.

Meanwhile, Reverend Anderson is forced to confront his actions from last month. Namely: holy shit, he straight up murdered somebody. This doesn’t seem to give the Reverend even a moment’s pause, but it’s of course too much for Kyle and his recently reunited family. The tense allegiance between the Reverend’s unwavering faith and Kyles more pragmatic doubts has been the heart of this series more or less from the beginning, but it’s hard to imagine that relationship recovering from this. Kyle’s got more than enough going on to occupy him at this point, but I’m worried about what this turn means for the good Reverend. Maybe he’s Kyle’s secret twin sister?

Spencer: Slam has done a phenomenal job of building Jen and Maisie’s friendship, to the point where, when their big fight comes only three issues into the series, it still feels absolutely devastating. In Slam 4, Pamela Ribon and Veronica Fish are just as phenomenal at bringing their two leads back together in a way that feels not only earned, but emotionally satisfying.

First, though, we get one more glimpse at the gulf that separates them. 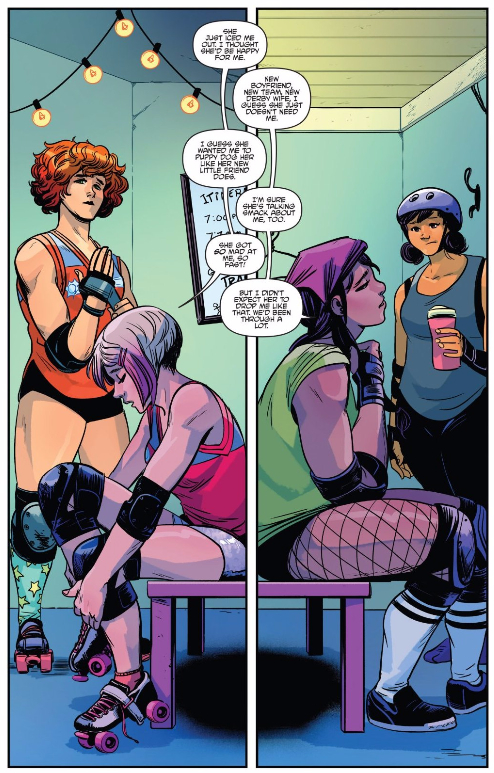 Both women obviously still care about each other, but they’re also hurt, and as close as they still are — as emphasized by their back-to-back poses — there’s just a distance that’s grown between them they can’t yet cross. Their words have failed them, but it’s actions that save the day. That’s a theme emphasized throughout the entire issue, actually: a small gesture from Jen is finally enough to win over Velvet Coffin, and Jen and Maisie can’t help but to admire each other’s growth on the track. The Roller Derby bout provides the arena where these two can reconnect — the issue not only emphasizes typical sports themes such as teamwork and friendly competition, but is accompanied by clear, kinetic action from Fish — but ultimately, their friendship can only be repaired through the revelation that it’s more important to them than Roller Derby.

Look at how Jen’s Derby gear is discarded and left on the ground in the foreground of the panel as she abandons a vital match to carry her injured friend to safety. Roller Derby and their other friends, family, and teammates will always be important, but with this gesture they’ve carved special places for each other in their lives that nothing can interfere with; they’ll always come first. It’s heartwarming to see their friendship back on solid ground, and the fact that next issue promises a whole different kind of threat (at least according to the Comixology solicit) has me confident that it will stay that way for a while. I’m glad: the stronger the connection between Jen and Maisie, the stronger Slam becomes.

Patrick: Have you ever noticed there are some people voices you can’t recognize on the phone? Or maybe you have a friend that you wouldn’t recognize on the street if they we wearing a suit? We end up using a lot of superficial signifiers to recognize even our favorite people, and that’s doubly true for our favorite fictional characters. Hell — that’s one of the reasons the titular Turtles went from all wearing red masks to blue, red, orange and purple. The Turtles’ personalities give them away, but it’s always nice to have that immediate acknowledgement that you’re dealing with the right character. TMNT Universe 7 introduces a second version of Donatello in the form of a rebooted Metalhead, but for the life of me, I just can’t see the character I love under Adam Gorham’s wonderful drawings.

Which is a shame, because I genuinely love this as a story concept. The set-up is that back when Donnie was pummeled by Bebop and Rocksteady, his consciousness was uploaded to the Metalhead robot. Then, when Donnie’s body was healed, his consciousness was transferred back. But, as anyone that’s every moved a file between hard drives knows, you’re not just moving something, but copying it. Donnie’s mind, at the point he was moved back to his own body, is still rattling around inside Metalhead, making him as “real” as the Donatello that was in there a like a dozen issues ago. Unfortunately, writer Ryan Ferrier doesn’t do a lot to convince us that Metalhead is the “real” Donnie. He doesn’t sound like Donatello, he doesn’t seem interested in their experiments, and Michelangelo describes him as “pretty chill.” It’s like the team never quite expresses what’s so cool about this concept, even if Gorham does tease it early in the issue. 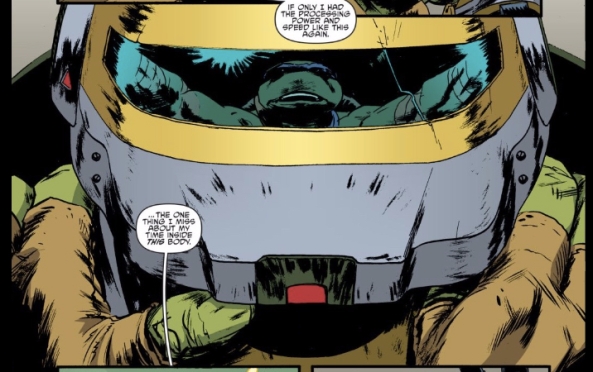 I think the problem is that Ferrier refuses to let the perspective shift away from being sympathetic to the absolute unquestionable personage of flesh-and-blood Donatello. Metalhead is being soldered, rewired, and eventually even slapped into existence — so we’re not exactly encouraged to think of him as a living thing, let alone “Donatello.” That also makes Metalhead’s actions later in the issue, which appear to be motivated by Donatello’s trauma at the hands of Bebop and Rocksteady, so much less powerful. I mean, it’d be something if the Donnies could have shared a moment about how the rhino freaks them both out, but Metalhead appears to be reacting in isolation, a pale facsimile of the hero he’s claiming to be. That makes this a pretty rote Turtle vs. Enemy story.