How many Batman books is too many Batman books? Depending on who you ask there ain’t no such thing! We try to stay up on what’s going on at DC, but we can’t always dig deep into every issue. The solution? Our weekly round-up of titles coming out of DC Comics. Today, we’re discussing Green Arrow 18, Green Lanterns 18, Midnighter and Apollo 6, Shade The Changing Girl 6 and Superman 18.  Also, we’ll be discussing Batman 18 on Friday, so come back for that! As always, this article containers SPOILERS!

Michael: Modern superhero stories tend to aim for “realism” in their portrayals, hence the New 52. One thing that proves to be a problem for realism is the notion of kid sidekicks. We can believe that a billionaire fights crime, but we draw the line at endangering the fictional life of a minor.

After establishing a strong foundation for Oliver Queen in the present, Benjamin Percy and Eleonora Carlini delve into the past in Green Arrow 18. The first chapter of “The Return of Roy Harper” gives us an insight into the origins of the Green Arrow/Speedy team without belaboring the point.

Percy respects his readers enough to connect the dots between the few flashbacks presented. Ollie recruits the talented miscreant Roy Harper as “tech support,” leading to the trick arrows of classic continuity. It’s a nice blend of Rebirth and New 52 approach: it gives us the goofy elements but also explains them as a teenager’s indulgence. 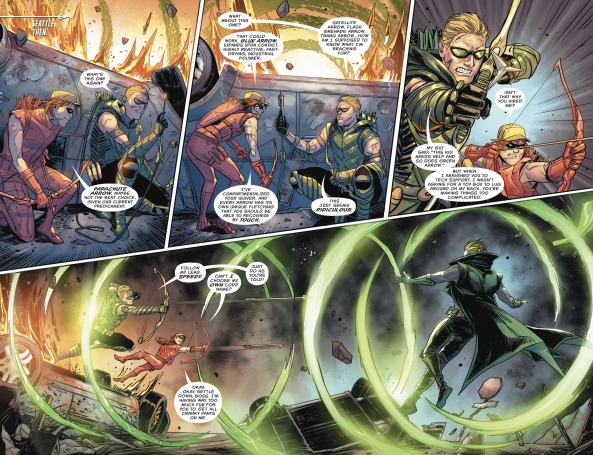 Not to forget its liberal ideology, Green Arrow 18 has probably the most direct reference to real-world events yet: The Standing Rock/Dakota Access Pipeline conflict. The real-world problem is grounded within the story by placing Roy at the center of it: he seems to have grown up in the Spokane Indian Reservation where the pipeline is being built. More than that, Roy is at the center of the story — he’s not a side character that returns; this is his issue.

I’m excited to see where the Roy/Ollie relationship goes, this was a strong Rebirth start. I just hope that someone gives his god-awful New 52 costume a redesign…

Patrick: I have a few pet peeves in comics that I’m probably never going to shake. One is that I don’t like issues that take a survey of a character’s life, as narrated by the character — too often they end up being rehashes of stuff we already know with no real storytelling value. Another peeve (assuming I don’t always need the modifier “pet” here) is that I don’t like it when heretofore unexplored mythology takes precedence over character. And lastly, I always have an extra hurdle to clear when a story takes place in outer space — I like a more meaningful sense of location than “space” allows. Green Lanterns 18 commits all three of Patrick cardinal sins, but it cuts such a wide, deep path through both Green Lantern and DC publishing history, anchoring its meta-wonkery (and meta-wankery) in the experience of a surprisingly sympathetic character: Volthoom.

It’s the 10,000,000,000 year life and times of the First Lantern! A daunting amount of time, right? Writer Sam Humphries is keenly aware of how much implied history there is out there for this guy, and he makes those 10 billion of existence sheer torture for Volthoom. 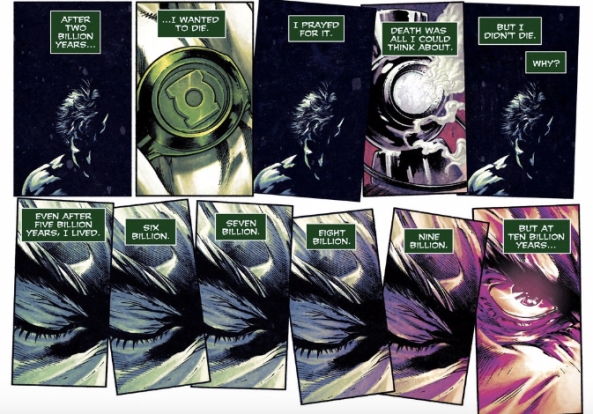 Not that he’s being tortured, by the sheer fact that he exists for such an absurd length of time is the torture. This makes Volthoom adversarial to his own mythology — which I love — and is a tacit admission that Green Lantern mythos has become unapproachable, even torturous. I’ve been on this train for over a decade and I am routinely dumbfounded by some Lantern (or other mythological wrinkle) that was previously unknown to me.

And believe it or not, Humphries’ way-zoomed-out retrospective on Volthoom’s life is actually working to simplify mythology. Ever wonder why Earth-3’s Green Lantern analogue, Power Ring, had the spirit of Volthoom inside his ring? Simple: Volthoom is a multidimensional refugee, and one of his stops when searching for a home was the universe of Earth-3, and he lent his connection to the emotional spectrum to the would-be Guardians of that Universe. Volthoom’s experience is all wrapped up in the origins of both the emotional spectrum and the multiverse, which lends a sympathetic human face to both.

Spencer: The titular stars of Midnighter and Apollo have been separated for most of the mini-series’ run, with their epic quest to reunite — even if means going to Hell and facing the devil himself — revealing the depth of their love for each other. That said, the full extent of their bond becomes even clearer once Midnighter and Apollo reunite in this month’s finale, an issue that’s as unabashedly romantic and sexy as it is action-packed.

Often, it’s all those things at once. Even as Midnighter and Apollo battle Neron or flee from the grotesque souls of all those they’ve murdered, they can’t help but to moon over each other: Apollo claims that there’s nowhere he wouldn’t hear Midnighter’s voice, and Midnighter reveals that he never made a plan to escape from Hell because he trusted Apollo to get them out alive. The full page splash of their kiss — draped in practically angelic light from Apollo — is about as romantic a scene as you’ll find in a comic book. As for sexy? If the foreplay that closes out the issue doesn’t do it for you (?!), there’s always this sequence, which actually made me gasp out loud in my car when I read it. 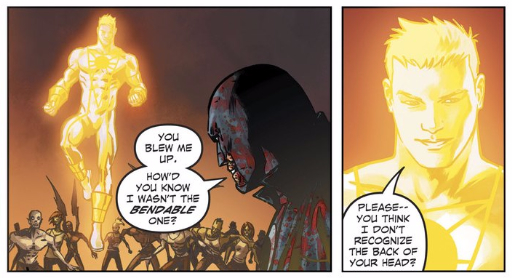 Aside from reemphasizing what a special relationship Apollo and Midnighter have, these moments stand out because they treat a gay romance with a kind of vocabulary you don’t often see in mainstream stories, the kind of romance/sex tropes usually reserved for heterosexual couples. Significantly, Steve Orlando and Fernando Blanco never explicitly mention their sexuality within the issue, treating them as if they were any other normal couple (because, aside from being superheroes, they are). That kind of treatment is progressive in its own right, and there are other moments that read in similar ways.

On a surface level, this is just a group of friends enjoying a meal together, preparing for whatever challenges they’ll face next. With the knowledge that most of these characters are gay, though, it reads differently. It’s a reminder that there’s strength in unity, that the LGBT community have overcome so much and will continue to as long as they stick together. In today’s political climate, that’s a message we need more than ever, and I feel the same way about Midnighter and Apollo. DC, who do I have to talk to about getting more of this series? Bendix is still out there just begging for an ass-kicking; there’s so much story left to tell!

Drew: Here’s a question: how would you have pitched the first few issues of Shade, The Changing Girl? The best I can come up with is “it’s like Invasion of the Body-Snatchers, only, there’s just one body-snatcher (not really an invasion), but it’s from her perspective.” It’s an intriguing premise, rich in the very same fish-out-of water conflict that writer Cecil Castellucci has been focusing on from the start. But it’s lacked any real protagonist — I suppose Shade’s erratic behavior might have eventually led someone to suspect she’s not Megan, but pretty much everyone had chalked it up to her coma having changed her. Indeed, the only character Shade was truly in conflict with was Megan herself, who had left a monstrous legacy Shade has been struggling with from the very beginning. Castellucci capitalizes on that conflict in issue 6, bringing Megan’s spirit back, introducing the first real hurdle to Shade’s new life.

Of course, that this is a “new life” may be debatable — Shade may have just wanted a short visit, but with it apparently impossible for her to return to Meta, she’s now fighting for her life. That sets some stakes that haven’t really existed in this series, pitching the fight with Megan several degrees higher than the teen drama and metaphysical poetry this series has made its home. In that way, “the disembodied spirit of a teenage girl miraculously fighting her way back to life” doesn’t exactly feel like a bad guy, Castellucci adds another piece to the puzzle, confirming that Megan’s return wouldn’t just be bad for Shade — it would be bad for everyone:

Shade’s not just quite saving the world, but saving the people touched by Megan’s monstrousness feels like the right scope for this series. She manages to defeat Megan, but a bizarre twist suggests that Megan’s body may now be pregnant with Megan, herself. It’s strange, for sure, but feels very much in line with the rest of this series. Moreover, it sets the series up to address teen pregnancy, albeit in its own idiosyncratic way.

Mark: Something’s gone wrong in the Rebirth time stream. Whether it’s the insertion of pre-Flashpoint Superman into the present, Dr. Manhattan dabbling with space and time in the past, or something else entirely, things in Rebirth are not exactly what they seem. And while we’ll undoubtably have to wait at for at least one more crossover event for the curtain to be pulled back fully, Peter J. Tomasi and Patrick Gleason’s Superman 18 begins the process of teasing out more information.

And tease it does. We still don’t know too much more about what Mr. Oz has been up to, or what escaped his prison. Nor do we learn anything concrete about the mysterious Clark Kent that shows up at the “Smith” farm to deliver a mysterious scrapbook right before glowing flames erase Jon seemingly out of existence. But the fact alone that these pieces are coming together in the same book gives me hope that we’ll get some answers soon.

Still, here’s the thing: I don’t really care about the mysteries of Rebirth at this point. But DC has been fidgeting uncomfortably, trying to get our attention like a child with a secret they desperately want to share to the point of distraction, so I’d love to just get it out there so everyone can move on.

In addition to the story, Gleason contributes pencils for the first time in a while. Sure, the Gleason-ness of it all is occasionally turned up to uncomfortable levels, such as when we see Jon for the first time and his enormous anime eyes threaten to swallow the page and the reader along with it:

But overall it’s nice to have him back.

It’s just one issue, so I don’t want to jump to too many conclusions, but one of the complaints with DC’s recents efforts has been the practical regression of its characters in the name of returning them to some idealized status quo. So there’s no reason to think that the apparent erasure of Jon and the rest of the Kent’s perfect domestic bliss will last beyond this arc, but you also can’t be certain it won’t stick since doing so would certainly push Clark and Lois back towards their classic dynamic in a way DC’s been seemingly jockeying for since their re-introduction into current canon.