Today, Drew and Taylor are discussing Once and Future Queen 1, originally released March 1st, 2017. As always this article contains SPOILERS.

Louise: Say I taught them chess instead of English. Every conversation is a game, every idea expressed through opposition — victory and defeat. You see the problem? If all I ever give you is a hammer…

Drew: Man, I loved Arrival. That movie is particularly good at crystallizing its themes in single moments — there’s a ton of them in the film — but the one quoted above is my absolute favorite. It’s a key turning point for the plot, but more importantly, it reasserts the notion that language influences the way we think; a key concept that had only only been playing in the margins before that moment. Of course, it may just be that “everything’s a nail” is a favorite pet theme of mine, explaining a good portion of human interactions, from minor conversations to declarations of war. It remains to be seen whether that theme will be important to Once and Future Queen, but I couldn’t help but remember this quote as this issue puts the welfare of the planet in the hands of a chess prodigy.

Which I suppose is the best place to start: Rani Arturus is a 19-year-old competitive chess player travelling with her parents from their home in Portland to a tournament in her father’s home country of England. Her parents come off as overbearing early in the book — I honestly assumed Rani was a few years younger, given how they accompany her on this trip and seem personally invested when she loses — but ultimately feel superfluous as the issue settles into its Arthurian mythology. You see, “Arturus” is the apparently the prophesized “Arthur,” and the King Arthur of legend was a fraud, at least, according to a time-travelling spaceman Merlin.

All of which is to say: this series is super goofy. And I don’t mean that in a bad way — there’s a ton of ridiculous nonsense in this issue, but writers Adam P. Knave and D.J. Kirkbride and artist Nick Brokenshire all seem to be having fun with it.

Moreover, I kind of have a soft spot for absurd updates to Arthurian legend — I still have fond memories of watching King Arthur and the Knights of Justice, a kids cartoon where Merlin transports a modern-day football team back to Arthurian times to stand in for the King and his knights of the round table. That show, like this series, had a fondness for groan-inducing synchronicities between the names of its characters and those of the legends of King Arthur (indeed, their King Arthur stand-in was “Arthur King”). Of course, this series might take that conceit too far even for me, introducing “Gwen” as our modern Guinevere, “Lance” as our modern Lancelot, and “Morgan Pari” as our modern Morgan le Fay. When repeated that often, it stops being a joke and starts feeling a little too tidy, as though everything that happens is preordained.

Which hints at my biggest problem with this issue. I’m generally not a fan of destiny stories precisely because they rob the protagonist of any agency, but this issue takes it several steps further, such that Excalibur may literally be fighting Rani’s battles for her. 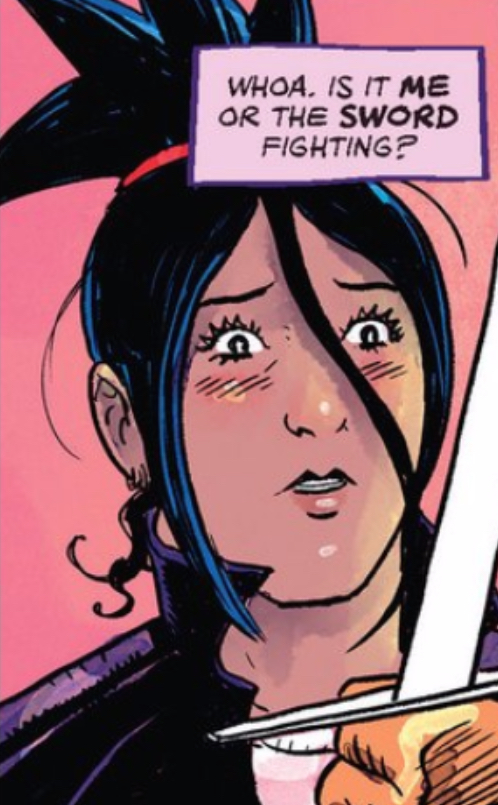 I’m comfortable with a little serendipity (even patently absurd serendipity), but this takes Rani’s autonomy out of the question entirely. Everything, from her name to her presence in that cave in Cornwall to her fighting ability, is the result of some outside force. She’s not really a protagonist as much as she is a passenger in this narrative.

I suppose that can change as the series moves past establishing its parallels to King Arthur, but I’m not sure this did enough to get me to stick around. We already know she’s destined to “unite the world,” so there’s little chance of anything else happening, even if Merlin does show up to half-heartedly suggest that maybe it isn’t all as fated as everything in this issue tells us it is.

I’m not even sure what the “it” is we’re trying to prevent — blood? Anger? This is way more frustrating than a wizard in a space-suit has any right being. I don’t know, Taylor, am I being too hard on this issue? There’s a lot about the idea of this series that I like, but the execution is lacking any real grace. Did that distract you, too, or were you able to kick back and have a little more fun?

Taylor: I think I was able to have a little more fun than you, Drew, but I totally understand where you are coming from when you say the execution is lacking. For me, nothing embodies this lack of execution than the presentation of the big bad in this series, the King in Shadow. We get our first glimpse of this evil being right after Rani draws Excalibur from the rock, thereby alerting the Faelands. 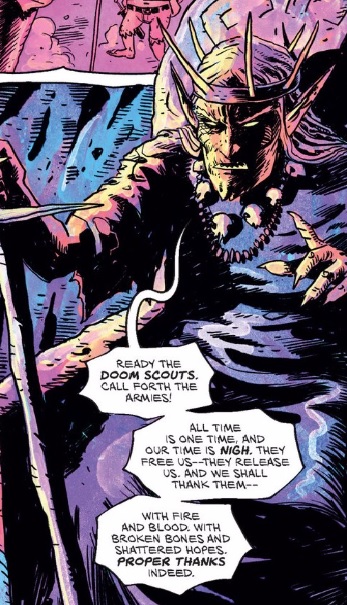 Everything about this enemy lacks originality. He’s old, pointy, and draped in shadow. Building upon this cliche is his command to “ready the doom scouts” and the promise of “fire and blood” to come. Now don’t get me wrong, every series needs an antagonist and I’m fine if said antagonist ticks off some of the commonalities that make up an arch-villain, but the King of Shadow is the walking embodiment of evil. I don’t mean that as a compliment or to comment on his terrifying power. He’s so fucking vanilla in his evilness that he makes no impact on the issue whatsoever. After all, what good is a villain if he doesn’t inspire any real terror or dread?

While this King in Shadow is offensive, there are other aspects of this issue I found intriguing if not downright enjoyable. First, I think more needs to be said about Spaceman Merlin. The dude shows up all of sudden and just starts spouting off platitudes about the nature of time that would blow the mind of any freshman philosophy major.

In his infinite, wizardly wisdom, Merlin tells Rani that time is like an onion. It’s layered and doesn’t go in the straight line we perceive. That notion is intriguing to me. Not so much because I necessarily believe it to be true so much as I wonder how that will impact the series. If time is the way Merlin says, does that mean Rani is, was, and ever shall be King Arthur? If so, that’s a fun little trick the creators are playing with the whole idea of destiny that you found off-putting, Drew. True, this might relieve Rani’s character of agency, but I find that the idea of Arthurian legend steeped in quantum mechanics more than makes up for that shortcoming.

There are other things Knave, Kirkbride, and Brokenshire pull off in this issue that I liked. As the issue opens we see Rani and her family preparing to leave for England for her chess tournament. In showing this, the creators flick between scenes that present the mundane aspects of leaving for a trip.

What I like about this page is that each panel begins in medias res. As you read the page each panel presents a new stage of Rani and her parent’s trip to the airport. Each of these scenes begins in the middle of something happening, but gives us enough clues to infer what came before each. I like this clever sort of storytelling that asks me to really engage in my reading experience. The icing on the cake is that all of the things Rani and her parents are going through are so well known to each of us. By showing Rani going through the mundane aspects of life such as going through airport security I’m drawn to her because I’m shown she’s just a regular Jane like you or me.

So while this issue certainly has its pitfalls, there’s still enough here to entice me into reading another issue. However, while I’m willing to give the benefit of the doubt to creators in a first issue while they find their footing, I expect the second issue to be executed more tightly.