Spencer: I’ll never forget a piece of advice a friend once gave me: “You’ve learned everything you can from this job. It’s time to move on.” That statement has always stood out to me because, up until that moment, I had never considered the challenge provided when looking at a potential job; I’d grown up thinking of a job only as a means to an end, a way to get money to survive and pursue more meaningful hobbies. Now though, while I recognize that there’s a certain amount of privilege involved in that advice, I also recognize the truth in it. I think that statement is certainly going through America Chavez’s mind in America 1 as well, as the hyper-competent Ultimate embarks on a new stage of her career: college.

I open on that note because it really is the key to processing this entire issue. Perhaps America’s most prominent character trait is her competence — throughout both Young Avengers and The Ultimates she’s been portrayed as someone with immense skill, knowledge, and power, as the member of the team who always knows what’s up and has it together even when everyone around her is falling to pieces. Transitioning that kind of character into a leading role can be tough, and I admit, I chafed a bit late in America 1 when she started getting shown up and making rash, foolish decisions. That’s not the America Chavez I’m used to, but the creative team of Gabby Rivera and Joe Quinones include two key ingredients that make this change go down smooth: America’s in a new set of circumstances, and she purposely sought out the challenge they provide. 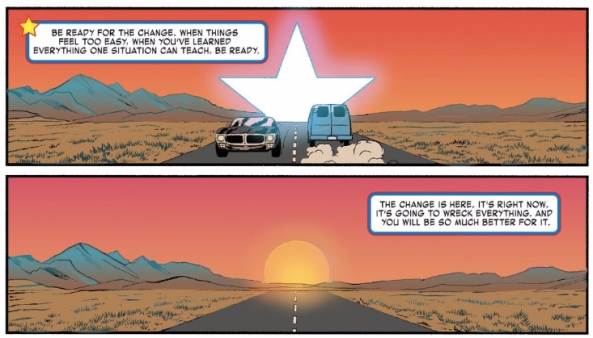 The job of saving the world has become too easy for America (of course it’s easy, she’s America freaking Chavez), so she’s seeking out a new challenge in the form of college. When Professor Douglas schools America on the topic of Intergalactic Revolutionaries, then, it’s not because America’s suddenly become dumb or ill-informed, it’s because she’s purposely immersing herself in subjects she knows little about. The fact that it’s America’s decision to pursue these ideas, meanwhile, makes her drive to prove herself all the more believable: not only is she used to being the best, but she’s not going to back down from a self-imposed challenge.

Rivera and Quinones are thus giving America new weaknesses and new goals to strive for without invalidating anything that’s come before, which I appreciate. Just as importantly, though, they also highlight some of her existing flaws just as readily as they do her existing strengths. America’s penchants for being slightly aggressive and aloof are made clear: not only does she unintentionally insult Prodigy, but she gets called out for using “sarcasm to deflect accountability” by Professor Douglas. Most damning is her break-up with Lisa Halloran. 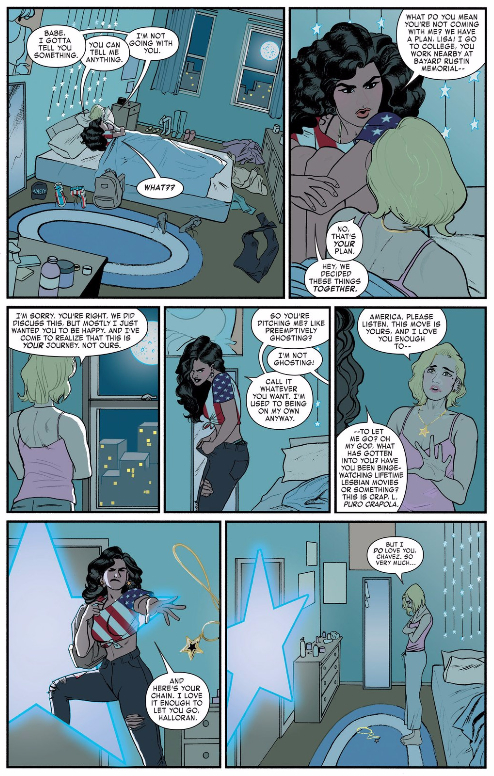 America points out that she’s “used to being alone,” and I think that’s exactly part of her problem: she’s more comfortable with isolation than intimacy, and thus sees Lisa deciding not to move with her as an act of abandonment and prematurely lashes out (I mean, I’m not even sure Lisa was breaking up with America — she never specifically says so. America can teleport; they couldn’t have continued dating long-distance?). There’s a part of me that worries about this being one of those moments where a new creative team wipes the slate clean, but given the rest of the issue, it seems more likely that Rivera and Quinones will address America’s fault in this eventually.

America 1 does more than just convincingly reestablish its lead, though: it also provides an engaging world and supporting cast for her to interact with. Sotomayor University is an inspired setting, not only to educate a character as otherworldly and sophisticated as America Chavez, but for the Marvel Universe in general (I’d love to see, say, The Unstoppable Wasp take advantage of it). It’s great seeing America’s various past and present teammates pop in, and Prodigy especially makes both an excellent compliment and foil to her: they’re both competent and driven enough to butt heads, but also genuinely care about each other and balance out each other’s skills (Prodigy excels in knowledge, America in butt-kicking).

I’m also intrigued by the plans the creative team seem to have for America’s future, and by that I don’t just mean the audaciously wonderful, time-traveling, Hitler-punching cliffhanger (though, as you can tell, I do absolutely love that ending).

Here, as America “time travels across the multiverse,” we see glimpses of her past (her birth), present (her break-up with Lisa), and her future. While the styles of the top left panel are fun, I’m especially interested in the top right, which seems to depict a woman obsessed with America. Is she a fan, or something more sinister? Maybe she’s related to the monster the Ultimates faced at the beginning of the issue, the one who effortlessly took down Monica Rambeau yet easily disintegrated after one star-spangled punch from America?

Also, I love the fact that, despite claiming to want to time travel the multiverse for her project, she immediately uses the ability to try to save her parents. It says a lot about America’s priorities while also once again emphasizing her secretive nature (she didn’t tell Prodigy what she really wanted to use his machine for).

All-in-all, aside from a few too-teenagery turns of speech (“totally” may have been used a few times too many, and felt especially weird coming from Monica Rambeau) I found this to be a successful first issue, but how do you feel, Drew? I know you were just saying the other day how interested you’d be in an America Chavez ongoing, but I also know your infamous difficulty with first issues. Also, do you have any thoughts on the art of Quinones, Joe and Paolo Rivera, and Jose Villarrubia? As much as I love their work, I found myself frustrated with how Villarubbia often colors directly over inks, removing them entirely — there were a few times it looked like characters were missing their noses!

Drew: You know, I’m normally a fan of judicious color holds — basically ever since Cliff Chiang and Matt Wilson started using a similar approach on their Wonder Woman run years ago (and since perfected on Paper Girls) — but you’re right that they don’t always work here. When it does work, I think it looks great — America’s face in that final image you posted is a perfect example — but there are times when those holds totally get lost. I don’t know if it’s that the colors Villarrubia is using on the lines are too close to the fill colors, or if it’s just that some of those lines are just too thin to really see with a hold, but it feels like the approach is missing as often as it hits, and is just distracting enough to draw attention to itself.

As for the rest of the issue, Spencer, you’re right to be wary of my distaste for first issues. This issue didn’t totally connect for me, but that may be entirely on me. It does exactly what it needs to: establish the voice of the lead, introduce us to her (new) world, and establish some goals to carry us into future issues. I’m just not sure how won over I am by any of these elements yet.

Let’s start with America herself. My read of America before this series is very much in line with yours, Spencer: hyper-competent badass. That leaves Rivera a TON of latitude when it comes to really getting inside America’s head, which is why it’s so surprising that we don’t get a lot of that. America’s decision to go to college is covered on the title page, so we don’t ever really get a sense of why she chose this particular challenge. Moreover, we don’t get a sense of the calculus that makes that decision take precedence over staying with Lisa in New York. That she’s definitely going to Sotomayor University is a foregone conclusion, but without any glimpse of America’s excitement at that prospect, it feels more like grim duty than anything else.

As for the University, I feel like it’s lacking any real specificity, right down to where it’s meant to be located in the country. On her way, America meets up with (or is it crosses paths with?) Kate “somewhere midway between Cali and NYC,” but that’s as close as we get to a location for the school. It’s a fictional University, so it could be anywhere, but in failing to make it be somewhere, it feels like it’s nowhere, if that makes sense. If anything, a school named after an NYC native who has taught at both NYU and Colombia would probably be located in the city, though I get that the point of this is taking America out of her comfort zone.

But man, I really couldn’t get a read on this school. Apparently, there are so many superpowered individuals there that professors make a point of neutralizing powers in class, and that America could forget that the school even admits non-powered individuals. But it’s not, like, for superheroes (see previous point about admitting non-powered individuals). So: what is this place? It feels kind of like Xavier’s School, but with a few civilians thrown in. That’s definitely a fun idea, but I think needs a bit more of an explanation. Is this what all schools look like in the Marvel Universe, or is this one unique in servicing both powered and non-powered students? Do they mostly market themselves as a school for superheroes (which is why America would seem surprised to see a non-powered friend there), or is that just the piece that caught America’s eye? What was it that drew America to this school, in particular?

Maybe that’s the part that I’m missing the most. Going to college is a great place to pick up a story because it’s such a big change, but a lot of its bigness isn’t just being in a new place — it’s about working really hard to get into that new place, it’s about making hard choices about which new place you choose to go to, it’s about negotiating with that new place how you’re going to pay to go there. I absolutely get that this series is about America being at college, rather than about the process of going to college, but without a nod to those college-specific stakes, there’s little to distinguish this premise from that of, say, Hawkeye, where Kate has similarly moved to a new place, gotten a new job, and is making new friends. “College” is supposed to be different than “new job,” but that difference basically all lies in what it means to the individual in question. Again, America never really comments on why college might be important to her, so we can only guess.

America and her new world can obviously be fleshed out in subsequent issues (which is why I’m generally bad at evaluating first issues), but Rivera pretty much nails the goals part: crazy college with crazy assignments drives America to crazy extremes to do her homework. These assignments may become background noise as the plot of this series begins in earnest (a la Harry Potter), but are great for color and getting America somewhere interesting in a flash. That’s enough to get me back for a second issue, which will hopefully start answering some of my other questions.