Michael: Hal Jordan and the Green Lantern Corps has been surprisingly superb title from the beginning of Rebirth. The one thing that it has working against itself? Its title. Why the need to put Hal Jordan at the center of everything? Sure, Hal has been the focus of some of the issues but overall this is a team book focusing on the Corps. Hal Jordan and the Green Lantern Corps 16 focuses that spotlight on everyone’s favorite vest-sportin’ loudmouth, Guy Gardner.

The Green Lantern Corps and Sinestro Corps are rounding up rogue Sinestros who aren’t too fond of the new alliance between green and yellow. The opening page of Hal Jordan and the Green Lantern Corps 16 shows how that mission is going for Green Lanterns Kilowog, Iolande and Tomar Tu. Guy Gardner however has taken it upon himself to single-handedly apprehend Arkillo: the big and nasty Sinestro Corps drill sergeant. What follows is a bloody punishment for Guy at Arkillo’s hands, until he turns the tables in the last few pages and rips the alien’s eyeball right out of his head. 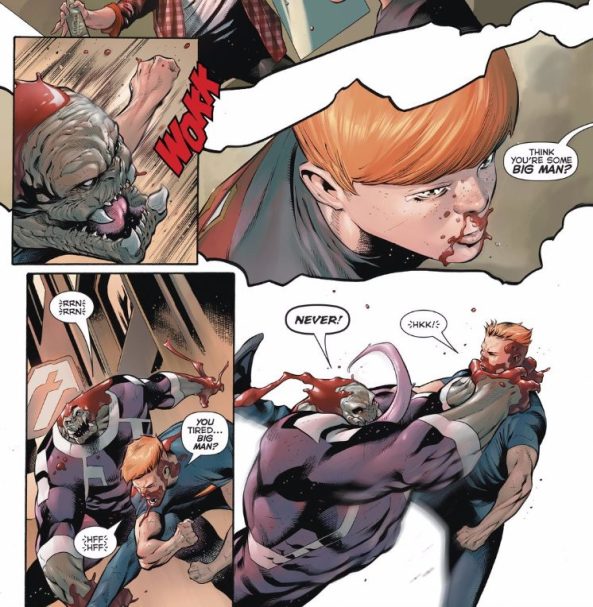 Robert Venditti and Rafa Sandoval frame the Guy/Arkillo (Guykillo?) fight with flashes of the abuse that young Guy suffered at the hands of his alcoholic father. Sandoval layers in these flashback panels like ripped pieces of paper or burnt film strips – as its clear these painful experiences are burnt into Guy’s memory. Initially, I wondered if Guy was reliving these memories as he fought Arkillo or if they were intercut the way they were as a point of reference for the readers. However it becomes pretty clear that Guy was drawing on the pain of those memories for the strength to take a beating before getting his second wind.

Guy Gardner having an abusive alcoholic father is another bit of classic continuity that Venditti is returning to the Green Lantern universe. In The New 52, Guy came from a family of policemen, but I’m not sure if that abusive father element remained or not. Venditti is reinforcing the idea that Guy Gardner – the loudmouthed braggadocio tough guy – is a persona that was developed out of a place of survival.

I’m gonna venture outside of this issue for a second to provide some context. While the Guykillo fight began in earnest in this issue but its “prologue” happened in Hal Jordan and the Green Lantern Corps 15. In it, Guy approaches Kilowog and says: 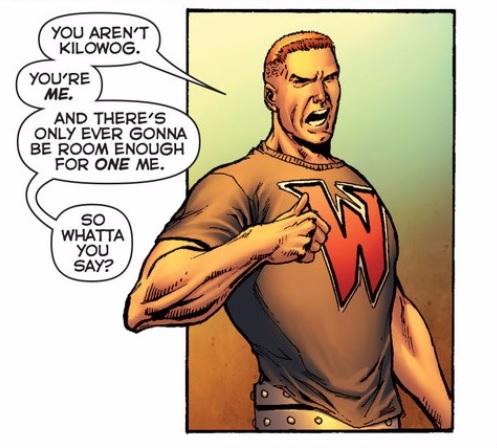 Though I think Guy might also be picking a fight with Arkillo out of overcompensation, this claim seems to line up with the fight that we see in Hal Jordan and the Green Lantern Corps 16. At first the abusive flashbacks only have a thematic resonance with what’s going on in the present day fight. However as the fight progresses, the flashback dialogue is replicated in the present – specifically by Guy himself. If you have a rough relationship with your father/mother, then one of your greatest fears is one day becoming them yourself. On the one hand, Guy sees Arkillo as his mean, fearful father but on the other hand Guy himself is playing the role of his father. 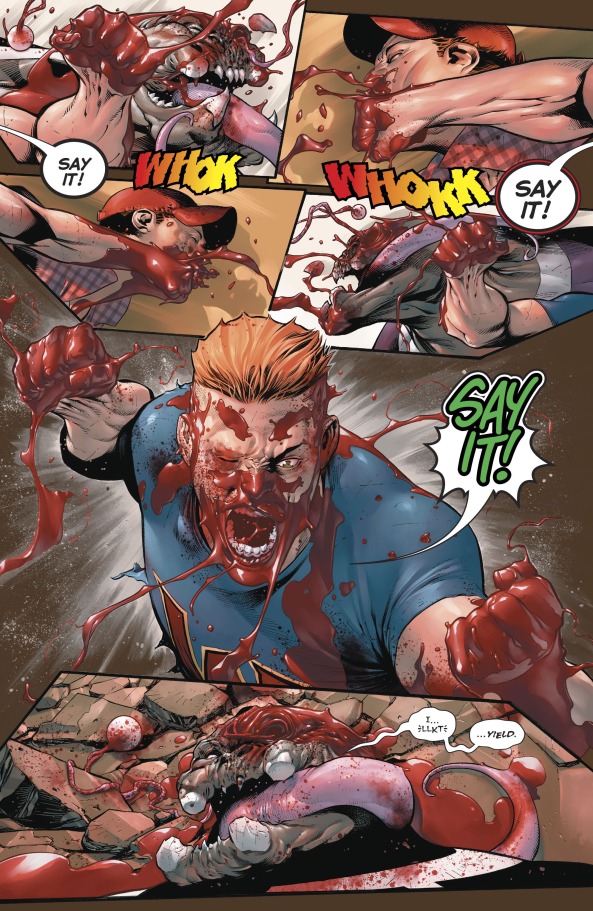 I think that this issue played with the tried and true formula of daddy issues pretty deftly, though that last part where Guy explained himself to Arkillo might’ve been a bit much.

Would ya look at Arkillo? Not only did Guy yank out the big ox’s eyeball but he de-pointified each of his damn tusk teeth! Way back when Arkillo actually got his tongue ripped out of his mouth by Mongul — a fate that he threatens guy with. Let’s talk about that tongue for a minute shall we? Arkillo’s tongue is getting excessively long these days — like, Venom levels of tongue length. Different artists have given him different looks — Ethan Van Sciver never gives him a wacky tongue I don’t think — but here Sandoval keeps switching back and forth. On this one page Sandoval goes from Venom tongue to normal in a single panel transition. I’m not really critiquing anything here, I just want you to marvel at how this guy manages to get out a sentence while that snake is hanging out of his mouth. 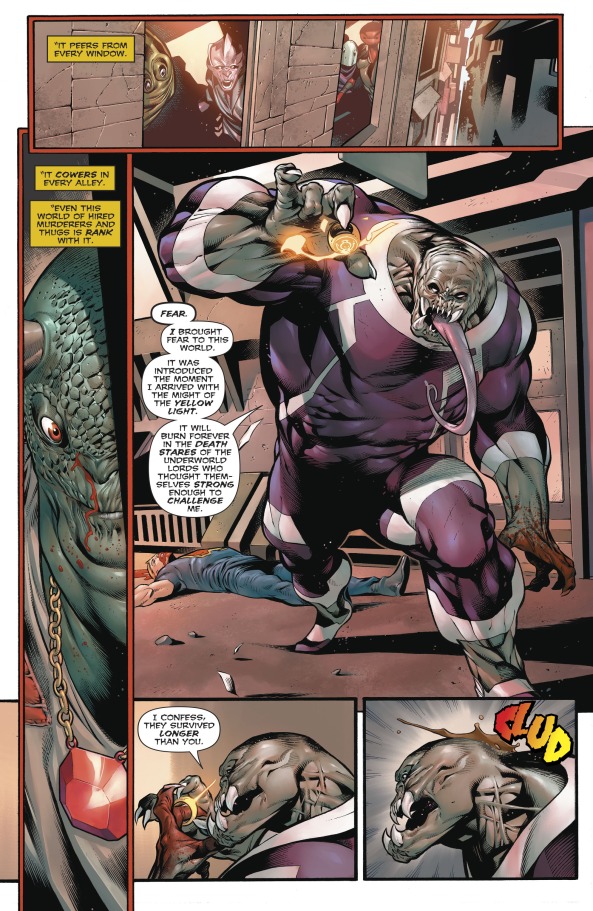 Patrick how do ya feel about them daddy issues? Are you satisfied with that reasoning for the Guykillo fight? How come Saint Walker doesn’t remember Guy Gardner? Certainly I’d remember Guy Gardner if I met him. And did you know that Ganthet and Sayd were married? I guess I remember them being secret lovers back before they were banished but I guess they got hitched too.

Patrick: Well, what even is “getting married” when you’re immortal space gods? They basically make the laws — at least as far as they see them — so maybe “husband” and “wife” are just terms that are accurate the second they use them. Y’know what? Strike that — let’s go back and see their secret wedding on the beaches of Planet Nok. “You may now nok the bride.”

Michael, I think you hit on something really interesting with your twin comments about Guy Gardner and continuity. First is addressing Guy’s dad: what did that guy do for a living? I suppose there’s nothing saying that the flannel shirt and red-baseball-cap-sporting drunk can’t be the same police officer we saw in the New 52, but that does require a little work on the reader’s part. That flashback scene is so full of loaded (and borderline cliche) imagery, that you know it’s all meant to make a specific impact. Just to prove Sandoval isn’t screwing around with the imagery — here’s an example of Guy’s father casting Arkillo’s shadow. 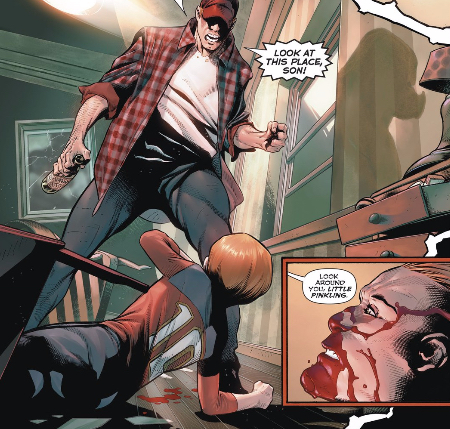 And squaring those kinds of images with Guy following in his father’s Johnny Law footsteps is difficult. Which brings me around to the second point: why wouldn’t Saint Walker recognize Guy Gardner? They must have fought together before, right?

We’re meant to have Walker’s assertions that he doesn’t know who Guy Gardner is grind against our expectations. We know better. Honestly, I can’t remember the last time I read a superhero that didn’t know the other superheroes in their story. It’s bizarre. Something is different — be it with Guy or Walker or… possibly the Universe? Remember, we still haven’t been back to Earth with these characters — it’s possible that the Universe they returned to is not entirely the one they left while they were away on their Lost Army / Edge of Oblivion journey. And maybe that’s just there to plant a flag on Venditti’s reclamation of Guy’s origin: “Yeah, I did it. Don’t recognize him? Tough shit.”

That may be too meta of a read for most people, but I think Venditti is actually leaning into that these days. There is a moment in this issue where Sayd and Ganthet pause because he senses “a great will… a presence of great power and import. Watching.” It’s followed immediately by this panel:

Oh, I got this one — I’m watching you. I don’t totally know what this means, or if we will eventually encounter a being within the world of this story that represents the “force of great will,” but I’m left to believe that Ganthet is referring to the reader. But we’re the set of critical faculties that can say “hey, shouldn’t Guy’s dad be a cop?” or “wouldn’t Saint Walker know Guy?”

Or maybe Ion is going to return — what do I know?

Shifting gears a little bit. I like seeing the theme of “suffering makes one stronger” subverted a little bit here. I’ve always seen that as one of the grosser part of origin stories — almost suggesting that the abused should be grateful for their experience because it made them a better adult. Abuse is not a gift, it’s not character-building, it’s fucking abuse. Guy calls on some of that “mah daddy used to whoop me” strength to best Arkillo in a one-on-one slugfest, but Guy is clearly in the wrong here. He mangles poor Arkillo, and that’s after starting the fight. He’s working out his own anger issues here, and only very loosely doing so within his purview as a Green Lantern. Plus, the narrative doesn’t reward Guy at all — as Michael points out, by the end of the fight, Guy has become his abusive father. But also, he collapses, nearly dead from the ill-advised beating he took taking a monster on in hand to hand combat. Abuse doesn’t make you strong, it makes you angry, impulsive and afraid.

4 comments on “Hal Jordan and the Green Lantern Corps 18”