Mark: One of the most compelling features of Greg Rucka’s Wonder Woman is its willingness to incorporate into real issues facing society, as we come to terms with our systematically poor treatment of women and grapple with how to resolve it. Like a proclamation of intent, the earliest arc in the book, “The Lies,” features Cheetah dealing with the devastation caused by abuse, rape, and victim-blaming. These are issues deeply entrenched in American culture made palatable to general audiences because the villains manifest themselves as mystical beasts and gods. But not all of the methods Rucka and his collaborators use to convey their message (for lack of a better term) are quite so foregrounded. For instance, every position of authority in Wonder Woman so far is held by a woman. This is a story about women, featuring women, that is in no way lacking because its pages aren’t filled with more dudes.

Wonder Woman 18 reinforces another hallmark of this run: the complexity of its characters. With “Godwatch,” Rucka recontextualizes the actions of Veronica Cale to be more than just mindless villainy. Cale is alone, with everyone she knows and loves removed from her. She’s been working for a year to bring back some essence of her friend and confidant Adrianna, but even when she’s successful it’s a pale, cruel simulacrum; a mere tool to help her regain her daughter. 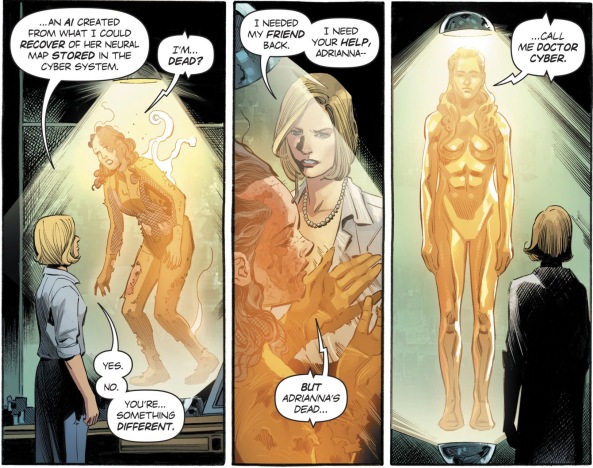 But while Cale is ruthless in her pursuit of Wonder Woman, Rucka and artist Bilquis Evely reveal her as a complex character. She knows what she’s doing is hurting other people, and she feels remorse for it, but she’s forced to do anything she can to reclaim her daughter from the clutches of Deimos and Phobos (notably the only males in the issue). The things Veronica Cale does in the name of her daughter are terrible. Cale is unquestionably a bad person. But she is also a complex and tragic figure, and that complexity allows readers to feel empathy for her. That humanization makes for powerful storytelling.

Handling art duties, Bilquis Evely, working with Scott Hanna and Romulo Fajardo Jr., delivers another beautifully crafted issue. Evely’s style and compositions paired with Fajardo Jr.’s colors give the issue a classic feel, like an adventure film of the 1930’s. 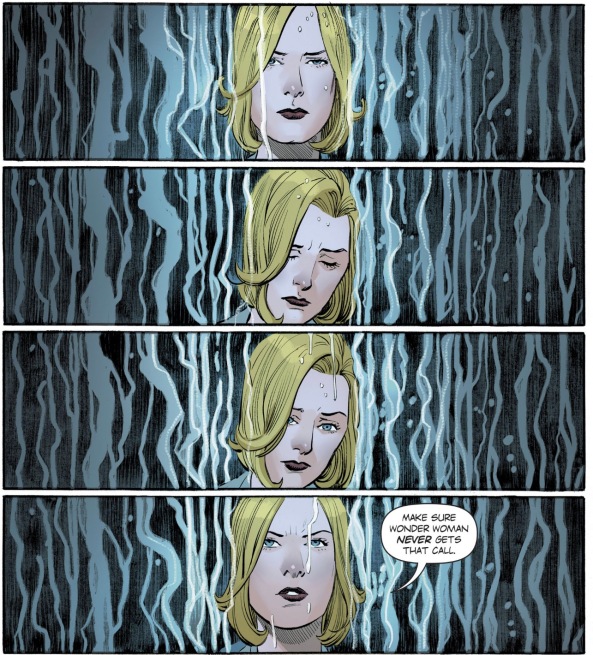 In that same vein, Tomb Raider specifically gets a winking shout-out this issue, and the whole issue carries that vibe.

What Wonder Woman 18 could use is a little more of its eponymous character. Diana barely features in her own book once again, and, while “Godwatch” is clearly focused on telling things from Veronica Cale’s point-of-view, I still wish we got to see more of Wonder Woman in action. Additionally, Barbara Ann’s abrupt transformation into Cheetah feels a little anti-climactic, especially since we already know the deep anguish it causes her in the future thanks to the aforementioned “The Lies.” Cheetah’s quick reveal leaves open the possibility of her transformation being explored in another flashback story in the future, but the perfunctory nature of it in this issue is a bit of a letdown.

Michael: While I agree that Wonder Woman 18 makes Veronica Cale a little more three-dimensional, I don’t necessarily find myself as sympathetic towards her as you do. Maybe this nuancing of the character is a little too late in the game for me or maybe I’m just rooting against the bad guy. Cale is still fighting Wonder Woman to save her daughter, but it’s also clear — even to Veronica Cale — that she has somewhat lost herself in the process. 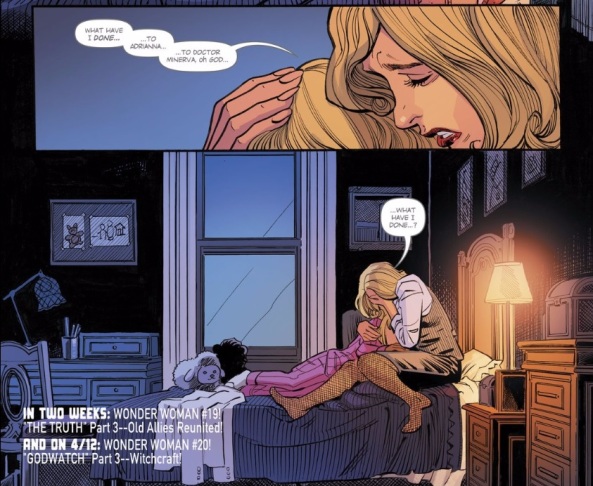 Cale is working against Wonder Woman on her daughter’s behalf but has become a sort of absent parent by doing so. Perhaps it’s just the air of corporate power and aristocracy that she exudes that makes me feel this way. She tells her daughter Izzy that she’ll be working late and “Marcel will be here the whole time.” Marcel is such a fancy butler name you guys. She also tells Izzy that Marcel will take her to the Air and Space Museum — how’s Marcel supposed to take a girl with no face to a museum!?

The fact that Izzy has no face means that any potential mother-daughter distance that may exist is only heightened. Cale has sacrificed her personal morality for Izzy and she has no clue whatsoever of how Izzy feels about those sacrifices. Izzy’s current state of facelessness is a perfect comic book metaphor for what Cale has lost on her path to villainy.

The way that Cale “resurrects” her friend Adrianna is another action that leaves me cold to the character. As Mark stated, Cale (somewhat) brought back Adrianna as a means to getting Izzy back. Cale tells Adrianna as much, but places an emphasis on their friendship. The way that Cale brings back Adrianna reminds me of how in Buffy the Vampire Slayer Buffy was resurrected/yanked out of heaven. While Cale/the Scooby Gang may have found it necessary to resurrect their friend, it was ultimately a selfish act that cost their friend some peace. Just look at how Bilquis Evely depicts Adrianna “coming back to life”: it’s an image out of a horror movie.

Of course Rucka establishes that this is not really Adrianna, but as close as Cale could get. It’s similarly eerie how Adrianna instantly accepts that she’s not who she believed she was and adopts the name “Dr. Cyber.” I suppose it makes sense that an artificial intelligence would react logically instead of emotionally, but it was still a surprising moment.

I may question her sincerity but I’ll give Veronica Cale this: she’s good at persuading people. Cale sells Dr. Cyber on helping her right out of the gate. And while it’s hard to tell what faceless Izzy is thinking, she doesn’t seem to be physically rebelling against her mother — she still believes her. The best example of this salesmanship is when Cale is meeting with Dr. Barbara Minerva about funding her research.

Previously I mentioned how in Wonder Woman 17 Cale was playing Minerva into becoming The Cheetah again under the guise of feminism and sisterhood. In Wonder Woman 18 we see her do it for the first time in the two women’s relationship. Diana is concerned for the safety of her friend Barbara as she ventures off in search of Urzkartarga. Barbara Minerva however feels like her super-powered friend is underestimating her and being overprotective.

Of course Veronica Cale is well aware of all of this and uses it to her advantage. Upon meeting her Cale instantly assures Minerva that she isn’t concerned about her use of a cane and insists that she knows Minerva can take care of herself. Not only is the wealthy Veronica Cale offering to completely fund Barbara Minerva’s research but she is offering complete confidence in Minerva’s capabilities as a scientist and a researcher. It’s an ego stroke that completely works and lulls Minerva into her trust.

Phobos and Deimos argue with Cale that Minerva wants to become a god because like all humans she covets power. There might be some truth to that but more to the point Barbara Minerva is someone who wants to be valued. Greg Rucka is doing some great work with Barbara Minerva and her path to and from (and back again) The Cheetah. Offering someone the chance to be a human/cheetah hybrid is not exactly the sale of the century. Offering someone to be someone important? To be valued for their talents in the face of god-like friends? That’s how you make a Cheetah.