“Batman’s superpower is that he always wins.”

Patrick: At this point, it might be difficult to trace this sentiment back to a singular source. So many creators and fans and critics have cited this as one of the defining characteristics of Batman. Whether by preparedness or wealth or training or his friends or sheer luck, Batman always wins. Leave it to Howard the Duck to present the antithesis of kind of magical thinking. Howard may, in fact, be the cynical scribe’s Batman, and his cheeky superpower is that he always loses. As Howard the Duck 5 clearly illustrates, nothing can stand in his way — not even victory. He’s always destined to lose.

And actually, “lose” might be too severe a way to label what Howard ultimately goes through. At the end of the day, he must be humiliated and returned to frustrating mundanity. For as much as this recent episode has caused Howard a great deal of discomfort, it’s hard to argue that it hasn’t been interesting. Hell, Doctor Bong sorta makes a compelling case for the comic-booky charms of his hybrid animals. Rhino-Lions? Elephant-Sharks? Hell yes, I want to see those things! I’ll even tolerate the confusing portmanteau of “Burpy” for the half-bunny, half-puppy, even though I couldn’t tell you where the R in the middle of the word comes from.

That’s obviously a lot of fun for artist Jacopo Camagni to draw, and it seems like it’s fun for writer Stuart Moore to script. The series is never quite as free and joyful as when Deadpool and Howard are actively vying for control of their shared corporeal form. Letterer Joe Sabino dutifully hops back and forth between Deadpool and Howard’s signature speech balloon styles, indicating which one of them is talking at any given minute. It’s alternately adorable and thrilling, eschewing the dual comedic stylings I described in my write-up of of the first issue for a neat synthesis of those styles. Howard can be old timey and put-upon and Deadpool can make a poop joke all in the same breath. 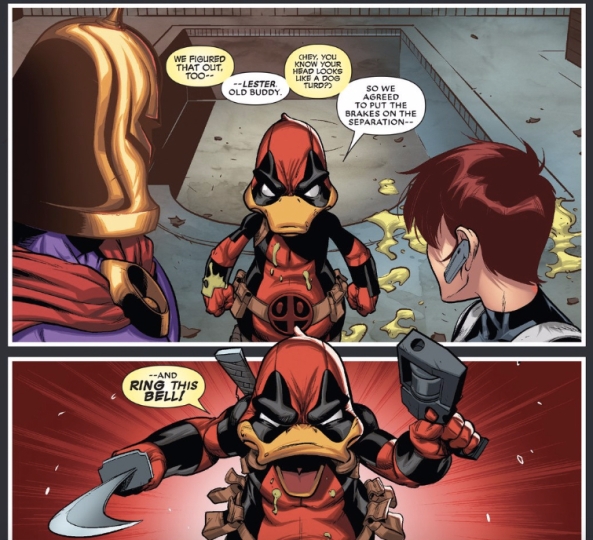 Oh and that green stuff that’s splattered all over the ground? That’s Deadpool the Duck’s vomit, which the character is forced to eat in order to re-inject himself with nanobots. That’s one of the grosser sentences I’ve typed for Retcon Punch (and I’ve been doing this for years), but it’s also the perfect demonstration that these two comedic sensibilities have merged completely. Vomit, and gross-out humor in general is straight out of Deadpool’s playbook, while the indignity of having to eat it is straight out of Howard’s. Deadpool (again, characteristically) breaks the fourth wall to insist that this is no way to end a mini-series, and while he’s technically correct, there’s really no way for the confrontation to really measure up to the genius move that is making the hero eat his own vomit.

And actually, one gripe I have with the issue is that Deadpool’s defeat of Doctor Bong literally doesn’t make sense. Everyone else is stunned by a Bong, but not Wade. Why?

Parts of Deadpool die? He’s literally famous for not dying, so this seems like an out-of-character workaround, especially held up against all of the perfectly in-character action throughout this series.

But perhaps the most fitting indignity is that the miniseries ends with Deadpool getting to go out on S.H.I.E.L.D. sanctioned adventures, like fighting Galactus and raiding Red Skull’s island, while Howard has to stay back to do the paperwork. It’s a dour ending for the dead-end-duck, but at least it’s fitting. I don’t totally know what to make of Howard’s one panel fantasy of reverting back to Deadpool the Duck and gunning down everyone in his office… maybe he’s learned all the wrong lessons from sharing his body with ol’ Wade Wilson.

Michael, how did you like the end of this thing? What’s the deal with Doctor Bong trying to marry everyone? Also, you’d think Roxxon would have a more streamlined process for collecting on workman’s comp claim, right? That’s gotta be, like, an everyday concern for them.

Michael: Roxxon’s a pretty big fictional evil corporation, so imagining that they’d have an easier process for filing workman’s comp than Basalt’s handwritten method is perfectly reasonable. Then again, I’ve always been curious as to what the benefit of working for a big evil organization is for the average grunt. I think I recall Basalt mentioning something about healthcare in an earlier issue? I think that the simpler answer is that employees of Roxxon, Hydra and the like are just gluttons for punishment. Look at Basalt herself: the woman survived a satellite explosion, burnt half of her face and is still chasing after Deadduck just for a paycheck.

In defense of Burpy: I’d argue that it’s just Doctor Bong’s affectionate nickname for the little critter, rather than a portmanteau designation. When Bong is listing off all of his dream hybrid animals he doesn’t actually give them hybrid portmanteaus. He refers to one hybrid as “elephant-sharks” instead of the clearly obvious combo “eleshart.” Also, Patrick, Burpy burps. It’s his thing!

As for Doctor Bong’s penchant for proposing to women at the drop of a hat? I’m not quite sure. I don’t think that landed its intended effect. I think that if Stuart Moore left it at Bong only proposing to Basalt I might’ve received that better, implying some off-page history between the two that we aren’t privy to. But if the joke is that he’ll propose to anyone and everyone then why not go for the hat trick an propose to a third person — maybe even Deadpool or Howard himself? As it stands it’s just an odd inclusion that made the ridiculous character a little more ridiculous.

Overall I don’t think that Deadpool the Duck 5 won me over. There’s a lot going on — the advertised Deadduck antics, the goofy machinations of Doctor Bong, a mother/daughter conflict and even Rocket Raccoon — but none of these elements ever seem to cohere. Instead it read like a lot of plot points happening at one another.

The aforementioned “marriage proposal bit” is a good example of this: just as the story takes a certain direction — BOOM — it’s jerked off into another. I guess that could be the point, but it felt like a distraction. I get that Doctor Bong is intended to be a comically absurd villain with a whacky plan, but at least let him follow that plan. He’s a villain in a goofy costume with goofy powers who wants to make animal hybrids, propose to every woman in sight and seems to have a minor form of ADD. That’s a villain who is very busy.

Patrick noted that Howard the Duck is a character who is “always destined to lose.” I think because of Gerry Duggan’s Deadpool run, I tend to see Wade Wilson as more of a tragic loser himself, making Deadpool the Duck a book about which loser is the losing-est, in a way. Deadpool is a wildcard with a wide range of emotions and actions that are pretty unpredictable. Howard the Duck is a cantankerous curmudgeon who just wants to be left alone. 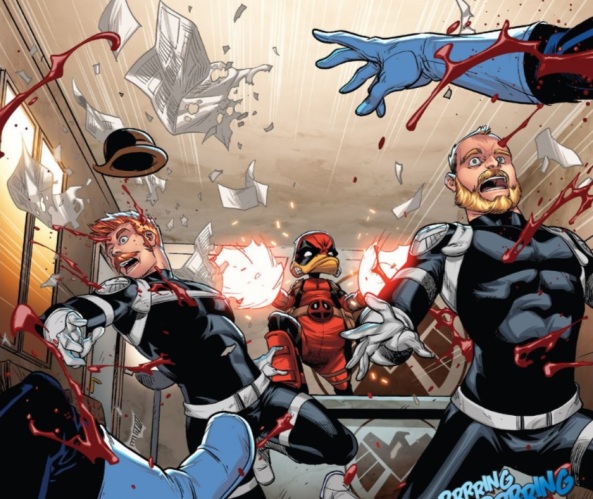 When things go bad for Deadpool — and they usually go very bad — he comes out on the other end smiling. Howard the Duck, on the other hand, will silently sulk about his problems and imagine murdering everyone in the nearby vicinity. On the one hand, you have a leprous, happy-ish ninja man-child and on the other you have a grumpy old duck who’s be relegated to the customer service desk. In that respect, Deadpool the Duck makes Wade Wilson look like he’s on top of the world.