Look, there are a lot of comics out there. Too many. We can never hope to have in-depth conversations about all of them. But, we sure can round up some of the more noteworthy titles we didn’t get around to from the week. Today, we discuss Teenage Mutant Ninja Turtles 68, Lumberjanes 36, Curse Words 3, Descender 20 and Reborn 5. Also, we’re discussing X-O Manowar 1 on Tuesday and Bloodshot Reborn 1 on Wednesday, so check those out! As always, this article contains SPOILERS.

Patrick: I saw Ben Kweller play at my school in early 2006. It was a great show, totally intimate and cool experience, but the highlight of the night was hearing Kweller play “Thirteen” a few months before it was released on his self-titled record. It’s a naked song, emotional almost to the point of being embarrassing, and in the years since, has become one of my favorite Kweller tunes. For as cool at that experience was, I sorta couldn’t wait to hear what that song sounded like on the record. I had this notion that the album version of “Thirteen” was the “definitive” version of the song because that’s how I knew the songs of Ben Kweller — on albums. I realized that I have the same kind of baggage with Teenage Mutant Ninja Turtles, but now I can’t wait to see the definitive version of these characters as drawn by Mateus Santolouco. TMNT 68 finally, gleefully defines Ray.

Last issue put Slash’s destructive powers on display, but Ray’s the star of the show here. I’m stupid-excited to see Santolouco justify each one of the Mutanimals in turn, and I love getting a little hint of all the characters he’s got in his sites reflected in Agent Bishop’s shades.

But to this issue and what definition means for Ray. I don’t know how exactly, but I was not tracking just how huge and muscular this character is. Santolouco draws him in a wide-neck black t-shirt that strains against biceps that aren’t so much bulging as they are just uniformly thick. He’s also got this gently intimidating smile and a permanently furrowed brow which belies his thoughtful, self-sacrificial approach to heroism. There are five pages of hot Ray action in the middle of the issue, but my favorite has to be how he escapes his bonds in the first place, utilizing a pair of animal traits to gain the upper hand. 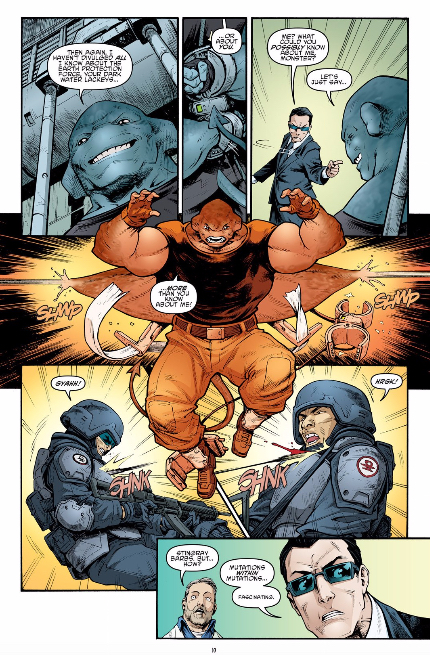 Goddamn, it’s so cool the way Ray’s barbs split the page for that third row of panels! Add to that the fact that the newly freed Ray overlaps with an additional five panels — it’s like he’s literally overpowering the whole page. He ends up forced back into his shackles, but he’s bought his teammates some time to escape, which is the perfect character trait for writer Tom Waltz to sprinkle on this enormous fish-man. We were listening to live versions before — this is the album, baby.

Taylor: At one point during the 36th issue of Lumberjanes the announcer watching a roller derby match between the Lumberjanes and some yetis wonders why the match is still going on. 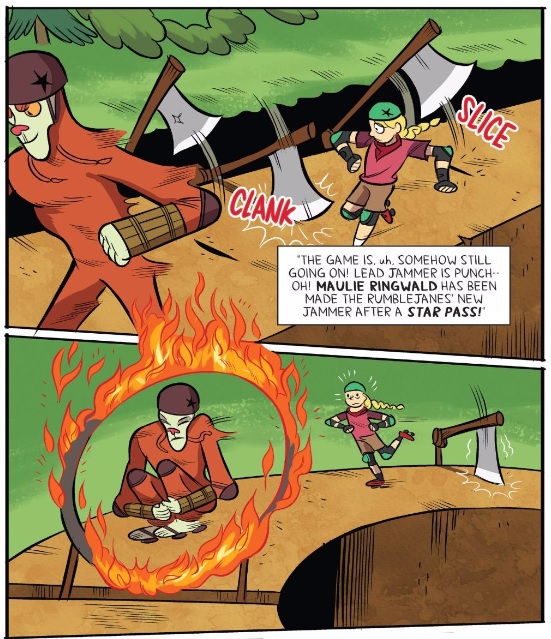 The announcer says this because a switch has just been tripped which had turned the roller rink into a deadly obstacle course, but it might as well have been a commentary about this issue. Virtually the entirety of this issue is devoted to this roller derby match, and it’s hard to fathom why that is the case. Just as the announcer wonders why this game is still going on, I’m wondering why it is still taking place on the 15th page of the issue.

Don’t get me wrong here, roller derby is an exciting sport that has bizarre rules which only add to its mystique. I totally understand why Shannon Waters and Kat Leyh want to devote an entire issue to the sport. But this issue is so poorly paced and frankly boring, that the fun the game should be just isn’t there. There are a couple reasons for this, the most important one being that little time is devoted to creating any sort of tension in this issue. The Janes easily out-duel their gigantic adversaries and at no point does it feel like anyone is in danger or that anyone would particularly care if they lost the match.

Like the Janes, it’s hard to tell if anyone involved in this issue is trying particularly hard here. The storytelling is weak and the art is severely lacking. Frequently the yetis size changes — sometimes they are huge and sometimes they are only slightly larger than the Janes — there are irregularities throughout the issue that confuse not only the size of things, but the action as well. While I want to like this issue and while it has the elements for a good story, it simply fails to be entertaining on many fronts.

Drew: “Magic” is an interesting word. We often use it to describe a fictional, mysterious force that lend its wielders otherworldly powers, but it’s just as often used to describe elusive-yet-totally-real moods, feelings, and a general sense of wonderment. That ambiguity rarely comes up in stories about wizards and spells, but seems key to the mythology of Curse Words 3, as Margaret discovers the other kind of magic is in abundance on Earth.

I suppose its rare that we see a wizard so cut off from the source of their powers that they might turn to movie magic or its ilk, but that only speaks to how unique Wizord’s situation here is. Robbed of his powers, he’s lost hope of fending off Sizzajee’s next attack, despairing both for himself and for everyone on Earth. 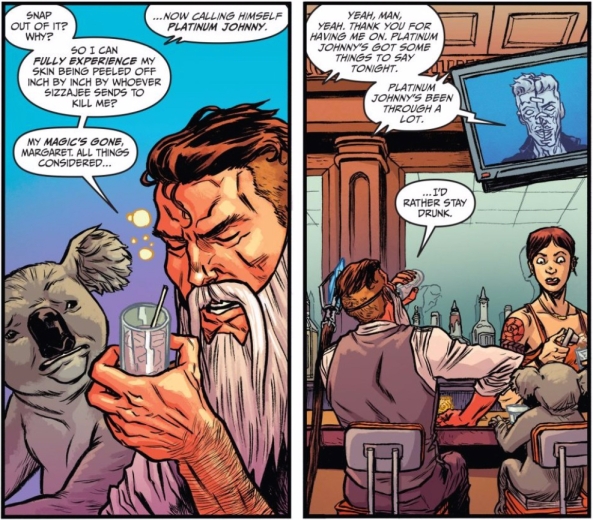 Of course, drinking just makes him miss Ruby Stitch, who is anxious to confront him on Earth, but is first sent to quell an uprising in Cornwall’s old realm. It gives her a chance to show off just how formidable she would be as an enemy, but it’s not entirely clear to me that she intends to be Wizord’s enemy — the flashbacks to her ambivalent reactions to Wizord’s romantic streak are just ambiguous enough to make it possible that she secretly wants to run off with Wizord, too.

But I’m mostly excited about the notion that Wizord can be powered by our more mundane magic. It introduces a fun mechanic to his powers, and gives Margaret something a bit more concrete to do beyond being his conscience. By the end of the issue, Wizord looks like he’s about to be tied up in some kind of police matter (possibly related to shrinking millions of people, but possibly not), but I can’t wait for him to get to L.A. to start cashing in on whatever magic he can find there.

Ryan D: Descender 20 has me excited. The penultimate issue in the “Orbital Mechanics” arc builds upon the past issues and puts the various plot threads into a state of high tension. Driller survived being jettisoned by Andy from a spaceship and comes crashing down on a new planet called Woch, beautifully rendered by artist Dustin Nguyen, and befriends a Yoda analog named Ol’ Mizerd. I’m glad Driller lives; I have enjoyed seeing the character development of such a binary and simple robot, who at first could only utter “Driller is a killer” and is now wrestling with moral conundrums and paying penance for what it recognizes as past transgressions. On top of that, the UGC assembled its terrifying-looking fleet to declare war on the terrorists of the Hardwire, and General Nagoki’s speech helped illuminate how high-stakes this mission is; 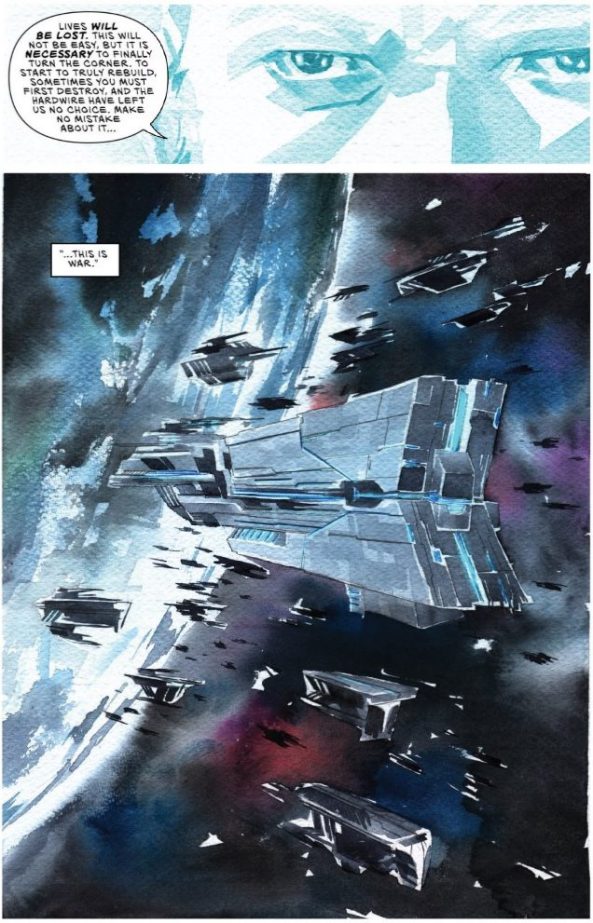 However, the audience is privy to the fact that Psius knows of the incoming reprisal from the humans thanks to Tim-22’s espionage on Captain Telsa and Quon’s ship. Seeing the robot leader unfazed by the prospect of such a formidable force attacking the robot hide-out keeps me on edge about how this fight will go down. And finally, in the moment we’ve all been waiting for, Tim-22 makes himself plain to Telsa, and ends the deception of playing at Tim-21. While Telsa has proven many times throughout this series to be a veritable bad-ass in a fight, we’ve also seen Tim-22 go HAM in the past, blasting enemies with a lethal combination of energy blasts coupled with extreme robotic agility. The throw-down ready to explode here could be quite the altercation — a personal battle underscoring the larger space conflict happening in vacuum between the humans and the outlawed machines.

While Descender has, at moments, sported somewhat meandering pacing as it used past issues to explore character history instead of furthering the overarching plot at the rate which I’d like to see, this arc has really started to push its momentum forward again. I can’t give enough kudos to artist Nguyen, who, per usual, tells such a damn clean visual story, letting the pages do so much work while also looking, objectively, beautiful. I’m rooting for Lemire to bring us home on this arc with a bang so that the audience sits primed and ready for when the human-made Harvesters become huge plot variables in the issues to come.