Drew: Goodness gracious, is this series great. I tried approaching this intro about seven different ways, but the only way to really do justice to this issue is to start off by acknowledging just how precise writer Greg Rucka and artist Michael Lark are in what they do. There’s so much going on in this issue that showcases exactly why this series continues to be one of my favorites, but I’m going to focus on the introduction of Vassalovka’s lazarus, the Zmey — an unexpected grenade of a threat that utterly disrupts the slow-burning family drama at the heart of this series.

First things first, the creative team absolutely nails the build-up to his arrival. They planted a great, terrifying seed at the end of the previous issue, giving us a glimpse of his gruesome handiwork long before we see him, and this issue emphasizes that that’s basically his purpose:

Malcolm expresses later in the issue how this strategy creates the myth of Vassalovka’s monster, but we already understand exactly how it works — we’ve already bought into that myth. Whatever is wreaking this destruction on coalition forces and civilians alike has to be unlike anything we’ve seen before — there’s none of the courtly decorum we saw on display when, for example, Forever faced Sonja; just pure carnage.

So when Johanna opts to send four lazari to face Zmey, we understand that he truly is a threat. We’re excited and terrified by the thought of this fight long before Sonja and Joacquim so dramatically throw open the church doors. Whatever image Rucka and Lark could put behind those doors had some serious expectations to live up to, and I think their hulking brute absentmindedly gripping the corpse of a dead baby absolutely fits the bill. 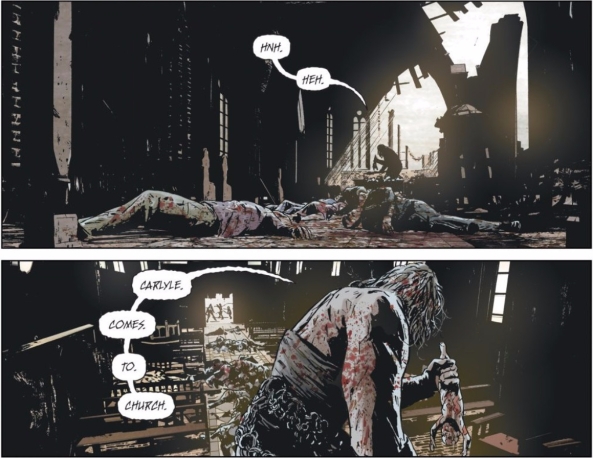 That’s just about the most grotesque thing I can imagine.

But the real delivery lies in just how devastating the battle is. While the fist half of the issue splits its attention between several threads, the back half unflinchingly details every crushing blow of this fight. Lark is unrivalled in his almost documentarian ability to convey violence, and this particular battle pushes him to his absolute limit, calling on both the detailed blow-by-blow approach he’s used in the lazari fights and the more scattershot approach he’s used to capture the chaos of an active warzone to craft a truly heart-stopping seven-page fight.

Lark is using every technique at his disposal, but I’m most impressed at how he uses mid-page cuts to emphasize the chaos of the scene while also usually giving us a wide-shot somewhere to orient these different mini-battles in space. So many of these pages illustrate this principle perfectly, but the most shocking has to be this one:

I’ll talk about that first panel in a moment, but what I want to point out here is that we immediately cut away from Forever and Joacquim, leaving us at the edges of our seats in the middle of the page. That we then see the battle again turning in the Zmey’s favor compounds the tension, putting Forever and her allies in serious peril. The final panel pulls wide to show us where these events are happening relative to one another, and makes it clear just how quickly this has happened — basically the time it takes for Forever’s hand to fall from above her shoulder in the first panel to her side in the last one.

But hey: let’s talk about Joacquim’s turn there. Because he’s being controlled remotely, that moment gets to work on multiple levels — it’s a shocking, unexpected double-cross, a sobering portrait of how a lazarus’ duty may conflict with their personal wishes, and a chilling window into what could be Forever’s future (or something like it) if her family resorts to chemically lobotomizing her. Of course, there’s not time to unpack it in the moment; the immediate effect is that it shifts the tenor of the battle from a four-on-one to a two-on-three (which then immediately becomes a two-on-two, as Thomas is taken out of the picture).

For me, though, Joacquim’s mid-battle reprogramming couldn’t help but drive home a reading that was nagging at the back of my mind through this scene; that the macho, nearly mono-syllabic threat of the Zmey represents Donald Trump. I admit, you have to squint to see Joacquim’s unexpected shift here to alyship with Russia as a result of “hacking,” but I’ll be damned if the battle’s sudden shift to men vs. women, with the women left demoralized and on the run didn’t perfectly capture the feeling after this election.

But maybe I’m just piling on the misery at this point. Spencer, I won’t hold you to commenting on the Zmey-as-Trump reading, but I am hoping you’ll be able to address some of the elements I completely ignored — especially Johanna’s plan to cheat Forever’s drug regimen (with Mike Barret’s help). It’s a fun development to have Mike on Forever’s side, though I suppose I’m still skeptical that Johanna’s side is Forever’s. Do you think their interests really are aligned, or do you suspect she’s working another angle?

Spencer: It’s always hard to tell with Johanna. It’s that unpredictability that makes her perhaps my favorite character in Lazarus — you never know what Johanna is thinking. In this particular situation, I tend to think that she’s being honest — or at least honest enough — when Michael presses her for her motive. 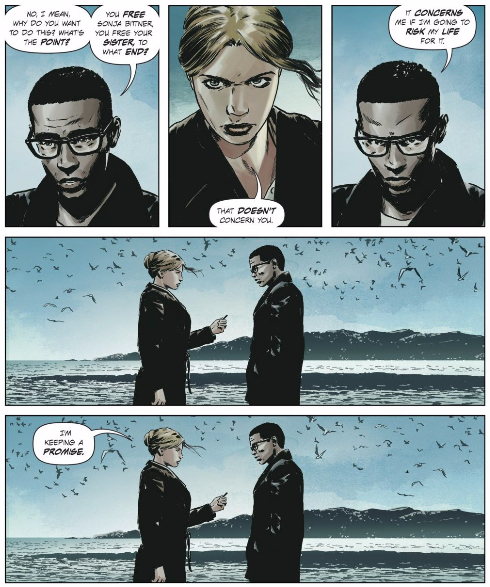 She’s doing this for Forever because she made her a promise — because they have a deal — and she needs Forever to be on her side. As long as their interests are aligned I think Johanna will continue to protect Forever, but make no mistake: Jo will betray Forever the moment she moves on to a different plan, or gets caught and needs a patsy, or Forever becomes unmanageable. This is the woman who sold out her own twin brother/lover; I think Jo may have a soft spot for Forever, but she’s done horrific things to people she loved far more.

What exactly Jo needs Forever for, though, is still up in the air. I’ve never been sure of Johanna’s ultimate plan — was working her way up the family hierarchy her goal in-and-of itself, or does she have grander ambitions? — but above all else, Jo’s number one objective at all times is self-preservation. That doesn’t bode well for anybody else — not Forever, and certainly not Michael.

Of course, Johanna is far from the only threat to Michael.

Michael’s assistant, Cady Rosales, is obviously suspicious of their work. I have to question the decision to assign Michael an assistant at all — is this just a risky/foolish move on Jo/Michael’s part, or is there some deeper reason behind Cady’s selection? Perhaps she’s a mole for Jo, meant to keep an eye on Michael/keep him in line?

That’d be a remarkably deceptive move, even for Jo, but then again, deception is the name of the game in Lazarus 26. It’s not just Jo/Forever/Michael’s plan; it’s Joacquim’s reluctant betrayal, it’s Vassalovka’s strategies with Zmey, it’s Forever’s interactions with her family. In fact, about the only character in this issue acting honestly is Michael, who is surprisingly frank with Jo. He’s no dummy, though — if Jo’s approaching him for this favor, then he knows he has at least a bit of leverage, leverage no one else has. As powerful as she is, for example, Forever is still powerless before her father.

Forever’s expression in that third panel just kills me. She’s pretending to still be on her father’s side, but even while hugging him — an action that’s supposed to be intimate and affectionate — she can’t think of anything but what a lie it all is. This is mirrored later in the issue, when Jo fakes a hug in order to pass Forever Michael’s data. It’s yet another moment of affection with a family member turned into something far more sinister — and even though in this particular moment Jo’s helping Forever, I can’t help but wonder if it’s implying that, ultimately, she’s as much of a danger to Forever as Malcolm is.

(Speaking of Malcolm, I’m also sensing a bit of a struggle between he and Jo. How in charge is she, really? Malcolm’s still letting her make the final decisions, but he also seems to be keeping important information and strategies from her — and he’s certainly the savviest character in the issue, predicting Morray’s betrayal when nobody else ever could’ve. If it weren’t for the fact that I don’t think he’d risk Forever’s safety, I might even theorize that he purposely manipulated Jo into sending the Lazari up against Zmey just to undermine her. Regardless, there’s almost assuredly more going on with him than what meets the eye.)

Anyway, Drew’s right to praise Michael Lark’s art and storytelling sensibilities throughout this issue. Drew already pointed out some of the most impressive moments this month, but honestly, there’s small details on almost every page that just stun me. It’s obvious how much effort Lark puts into each panel; just look at the first image I posted in my half of this piece. Its fourth and fifth panels are a repeated beat, but Lark doesn’t settle just for copying and pasting the panel, at least not entirely — even as Jo and Michael stand still, the birds above them continue to fly and move forward.

I also found myself especially impressed by Santi Arcas’ colors this month. Arcas’ palette is muted, but never boring — there’s a distinct difference between the soft glow of the ocean and the oppressive backdrop of Zmey’s debut, for example. Then there’s this moment:

Other than a few small alerts on viewscreens, this blast is by far the brightest color in the entire issue (it immediately stands out even while scrolling through the pages on Comixology). That emphasizes the power of the attack, of course, but also paints Zmey as even more of a monster than before; not only does he survive, but his shadowy form lurks in the middle of the intense red blast like some kind of insatiable beast. It’s great to see the creative team stretching their muscles like this.

Jeez, I can’t help but repeat Drew’s effusive praise that opened this article — Lazarus, indeed, is just a great comic book. There was a bit of a delay leading into this issue, but I’ll tell ‘ya, Lazarus is always worth the wait.