Drew: We all have some tolerance for ambiguity in stories. It’s what allows mysteries to remain mysterious until the final act, and just generally keeps us guessing about what our characters might do next. Tolerable levels of ambiguity might be called “intriguing,” but once that tolerance threshold is crossed, that intrigue curdles into confusion. There’s no hard rule for finding that threshold (which I suspect varies from person to person), but I suspect it hinges on the faith in the creators. That is, audiences will sit through moments where they have no idea what’s going on so long as they trust that it will all make sense in the end. Audiences tend to have a supply of that trust as a kind of benefit-of-the-doubt, which is why they can abide flash-forward cold opens, but that supply can be exhausted if the creators don’t work to reassure the audience that they can be clear when they need to be. Alas, such is the case with Black Cloud 1, an issue so dense in teasing mythology about storytelling, it doesn’t leave a whole lot of room for actual storytelling.

I want to be clear here: my confusion isn’t about the mythology or the specifics of how this dream-magic works, but about the most basic elements of the story. Take, for example, the narration that opens the issue, condensed here from the first three pages:

The future will always be dark. Formless. Empty. A blank page we fill with aspiration. And with dread. Stories we tell ourselves. Future’s a magic trick. A sleight of hand. A story.

Already, I’ve lost the thread. Is the future the blank page we fill with stories, or is it the story itself? That ambiguity would be fine if the series seemed interested in exploring it, but the narration actually seems more interested in the stories than the future. It continues:

Our stories shaped our world. And burnt it. Conjured our reckoning. And gave us heroes.

The theme here is the power of storytelling, not whether the future is truly unwritten. It’s a rich theme, to be sure, but it’s utterly confused by the opening lines, chipping away at my patience before we’re even introduced to the protagonist. It’s an unforced error that undermines my confidence in this creative team, creating ambiguity where clarity would be natural.

The most obvious case of this might lie in the simple detail of our protagonist’s name. I suppose having a character say it out loud just so we know it might feel a tad clunky, but it also provides the most basic unit of clarity, understanding literally who our protagonist is. There’s clearly some power in the name, such that characters she encounters in dreams can’t (or shouldn’t) utter it, but the fact that it was included in the solicit for the issue tells us that it’s not important that the audience not know it. That is, writers Jason Latour and Ivan Brandon are being cagey about this detail for exactly no reason, forcing us to ask questions that are utterly trivial to the story they’re telling.

(And ultimately, I do think her name is trivial. It’s not that I’m bothered by not knowing it, but that they didn’t tell us. Why be evasive about details that don’t matter? How can I tell what I’m supposed to be intrigued by if you won’t even tell me the most basic details of who this story is about?)

Artist Greg Hinkle and colorist Matt Wilson do an admirable job of adding as much clarity as they can. Take, for example, this sequence of the Mayor’s aide treating our protagonist to an all-expense-paid hotel room.

Because he’s an unnamed background character who literally only speaks off-screen before this page, the only thing that makes it clear this is the Mayor’s aide is that we see his face in both the second and final panels here. We can do the legwork to make that connection, but it’s not particularly rewarding legwork. It wouldn’t have taken much to make this sequence clearer on the writing side, which would have freed up the art team. The fact that they’re tasked with so much of the basic storytelling means the art can’t be as trippy as a comic about a dream witch really should be.

Michael, this issue didn’t really work for me, but I’m notoriously bad with first issues. Did this work any better for you? There are a ton of questions introduced in this issue that I didn’t get to (including what may or may not be the titular black cloud), but the fact that Latour and Layman missed these slow pitches doesn’t give me a whole lot of confidence in their ability to provide satisfying answers. Were any of those questions intriguing enough to draw you back for issue 2?

Michael: Oof. Yeah I’m with you there on your iffy reception of Black Cloud 1. I like your assessment of our respective “ambiguity tolerance thresholds” being dependent on our faith in a creative team. I think that’s something we all do with our favorite creators, whether we realize it or not. I’m not as familiar with the work of Jason Latour and Ivan Brandon, so maybe that’s a factor in any impatience I felt in Black Cloud 1.

When I’m entering the first issue of a new story, I try to find my footing in that new world — a sense of balance that tells me what the “rules” of that world are, who the characters are or what kind of tone the creators are going for. Looking for that footing in Black Cloud 1 wasn’t that difficult, but it did feel like the ground beneath me kept shifting. First we have the epic, mythic opening that Drew described, followed by Zelda’s (thank you Comixology) experience as a semi-homeless demigod hustler before the mayor hires her to make his son disappear during election season. That’s a lot of premise to throw at me while still leaving me unclear as to what the premise actually is.

The thing is I actually really like the idea of a mayor enlisting supernatural aid to ensure his re-election. In 2017 it’s hard to be a politician and not have your skeletons pulled out of the closet for all to see — in this case, the mayor’s screw-up son Todd. By having Zelda remove Todd’s piece from the board — and potentially from everyone’s memories — Mr. Mayor has the freedom to focus solely on his own re-election efforts. That is, if that’s the story that Latour and Brandon are trying to tell us; I’m not sure it is, though.

The most obvious, perhaps uninteresting question is “what is happening here?” It seems that Zelda comes from a world beyond ours (The Black Cloud?) that met its “reckoning” for not heeding the warnings of their stories. Zelda tells her rich, naïve clientele that her people predicted the nature of the world we live in now: “viral content and fantasy sports. Broadcast reality.” She preaches to people on the streets that she can see their future.

It’s difficult to tell if this is more than her sales pitch, however. When you’re following the exploits of a con artist, the audience is typically invited to learn their secrets, or at least what they’re embellishing to their customers. It’s clear to us that Zelda targets marks that are rich, dumb and young — your stereotypical millennial trust fund kids. The one time that we see Zelda use her gifts is with Todd, and she doesn’t show him his future or his heart’s desire but instead takes him to yet another Star Wars cantina knock-off.

Zelda’s sales pitch is incredibly vague, it’s practically the platonic idea of “marketing.” Then again, she’s using a vague marketing pitch full of fun buzzwords on millennials, so maybe that’s the intended effect. Either way, the place that Zelda ends up taking Todd to is a Wonderland-esque alternate reality.

In a reverse The Wizard of Oz, Todd is transported from his familiar world of color to a strange world of black and white full of humans and animal people alike. Curiously, the only colors present are those provided by Zelda and the things she interacts with. In this sense she is literally affecting the environment around her, almost disturbing the natural order of things. 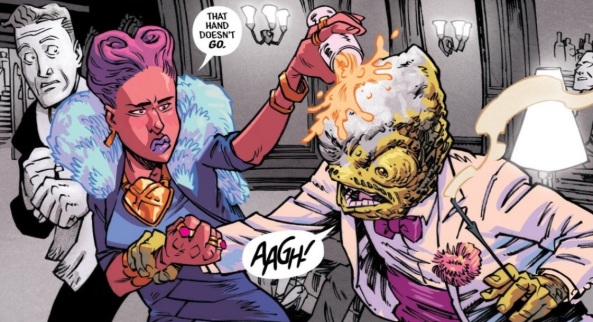 This little theory of mine falls apart somewhat when the lizard man owner of the bar appears — Wilson gives him full color as well. However after Zelda spills a drink on top of his head, he begins to turn black and white.

I can’t say for sure if I’ll return for Black Cloud 2. But since it’s a three-issue mini-series maybe I will just to see what the hell is actually going on here.