Today, Drew and Spencer are discussing The Wicked + The Divine 28, originally released April 12th, 2017. As always, this article contains SPOILERS.

Drew: Fatalism has always been baked into the world of The Wicked and the Divine. Right from the start, we understood that the pantheon were destined to die, though the exact reasons for their death remained mysterious. In the wake of Ananke’s death, our characters have begun to question whether or not they are truly doomed to die — they know only what Ananke told them, but no longer trust her words. As the pantheon variously pursue their different paths, some in hopes of defying what may-or-may-not be their destiny, I can’t help but wonder if their names might offer some hint about what those destinies might be.

Maybe this is an obvious line of questioning, but as someone largely unfamiliar with the namesake deities, it’s one I’ve never really been prepared to pursue. Sure, I perused some Wikipedia articles to inform me about the theological origins of these characters, but relied mostly on writer Kieron Gillen and artist Jamie McKelvie to flesh out their powersets, aesthetics, and attitudes. That is, I didn’t sweat the theology beyond “The Norns are beings who rule the destiny of gods and men.” But, of course, each one of these gods are associated with specific stories, stories they might just be doomed to repeat (or, at least could inform their present actions in some meaningful way).

What got me thinking about this was Persephone’s attempt to follow Baphomet before Dionysus lays this on her:

As tempting as it is to take this sequence (potentially) out of context to advance the “Persephone is the Great Darkness” theory, I was more struck by the resemblance to what I thought was Persephone’s most notable myth. Let me back up. Like I said, I don’t have a lot of familiarity with the specific myths of any of the pantheon, so I had somehow confused Persephone, queen of the underworld, famously kidnapped by Hades, with Euridice, a nymph who Hades famously didn’t allow to leave the underworld. That is, I thought Persepohne’s most notable myth was one where she is required to walk silently behind her lover, who must not look back at her, lest he condemn her to the underworld for all time. Turns out, that’s not Persephone at all, but it got me thinking about the specific stories associated with these gods.

For this issue, there’s no more pressing story than that of Sakhmet, who was worshiped and feared by ancient Egyptians for “having once unleashed her powers for the destruction of mankind.” Perhaps a goddess of war and destruction wreaking havoc on mortals isn’t so unusual to require a specific callback, but between the final glimpse we get of Sakhmet in this issue, and Woden’s revelation that this has happened before, it’s hard to feel like Sakhmet isn’t destined to play at least a part in “the destruction of mankind.”

Which brings me to yet another theory about the great darkness: perhaps it isn’t an outside force, and instead refers to the instability of the gods David alluded to last month. The big, obvious flaw in this logic is that we’ve already seen what we assume is the great darkness manifesting as a kind of amorphous, shadowy monster. Obviously, I can’t deny that the large, dark monster might indeed be the “great darkness,” but it occurs to me that I also can’t deny that that may only be one face of what the great darkness truly represents. At the very least, I think the thought of the pantheon abusing their powers would be an interesting place to take what has always been a fascinating exploration of celebrity culture.

But all of this theorizing ignores some of the more important developments in this issue. Cassandra manages to piece together Woden’s past life, which strikes me mostly as an opportunity for Gillen to be explicit on how ascending to the pantheon is decidedly NOT like transitioning genders, but I’m definitely suspicious of how quickly Woden changes the subject — Cassandra definitely touched a nerve. In the meantime, it seems like Sakhmet might have just jumped to the top of everyone’s “shit we have to deal with” list…but then there’s that epilogue.

This is Ananke as we’ve never seen her before, suggesting that her intentions may have been more noble than anyone gave her credit for. I’m not sure I’m equipped to unpack her letter just yet (gods know I didn’t leave myself enough space to do so properly), but I am struck by how evasive and cryptic she is even in this moment, the most unguarded we’ve ever seen her. WHY CAN’T SHE JUST TELL US WHAT THE GREAT DARKNESS IS?

Spencer, This issue was packed so full of event that I barely touched on half of it. I mentioned Woden’s reaction to Cassandra’s discovery, but didn’t mention David’s story about losing his son; I mentioned Persephone following Baphomet, but didn’t mention the apparent physical abuse he’s suffering; and I completely failed to touch upon Amaterasu’s increasingly insufferable brattiness. Sakhmet may be the most physically dangerous, but Amaterasu’s reckless ignorance can’t be too far behind. Did any of these threads catch your attention?

Spencer: Man Drew, all of these caught my attention in one way or another, because I really just love every one of these poor, doomed, screwed-up characters. I’ll try to get around to all of these points in due time, but let’s start with Cassandra. 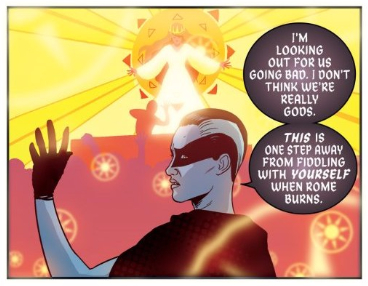 The fact that she doesn’t believe that the members of the Pantheon are actually gods is fascinating to me. It makes sense, I suppose — she’s always been the skeptic, and is the only member of the Pantheon to still go by her civilian name — but I have to wonder, if she doesn’t think they’re gods, then what does she think they are?

Maybe it comes down to the difference between having godlike powers and actually being the latest incarnations of ancient deities, in which case I can see a bit of where Cassandra’s coming from. The few glimpses we’ve seen of these characters’ previous lives (such as in the 1831 special) haven’t exactly shown a lot of similarities between each incarnation of a god, even down to them having different powers and seemingly very little-to-no memories of their previous lives. This would make quite a bit of difference, say, with Amaterasu — is she actually a cardinal deity of Shinto, or simply someone with the same abilities and too much ownership over the concept?

Of course, possible cultural appropriation is the least problematic aspect of Amaterasu’s hubris. More worrisome is the fact that she seems to be skipping out on her part of her “fight the Great Darkness” plan with Baal and Minerva in order to start this cult (she’s no longer living to inspire, as she famously claimed way back in issue 1, but to be worshipped), and most worrisome is the fact that her carelessness has set Sakhmet on the warpath.

In his writer’s notes, Gillen describes both parts of “Imperial Phase” as one long storyline, making Sakhmet’s breaking bad, not a conclusion, but the shattering of the dam supporting the Pantheon’s humanity. All of the gods have been heading down a dark path since Ananke’s death, but Sakhmet’s embracing this path will no doubt cause other gods to follow her lead. Despite quite possibly being the most physically imposing member of the Pantheon (she claims to be their best fighter, can go toe-to-toe with Baal, and even scares Amaterasu — who just a few pages earlier was confirmed to easily outclass the likes of Cassandra and Dionysus), the true danger here isn’t the literal carnage Sakhmet can cause, but the damage she can do to the Pantheon’s bonds of loyalty and morality.

It’s interesting, though, that just as Sakhmet becomes a greater bad influence than ever, Persephone seems to be escaping her influence.

Persephone already seemed to be feeling guilty about her break with Baal, but it’s the appearance of poor battered Baphomet that causes the full shift in her attitude. Obviously, the Morrigan turning abusive is nobody’s fault but the Morrigan’s, but Persephone would have to be completely heartless to overlook how she’s contributed to Baph’s difficult situation (that’s what Dionysus means when he says that Persephone would only make things worse — she’s too close to this situation). Sakhmet has been the devil on Persephone’s shoulder throughout this entire arc, so it’s heartening to see her seemingly rejecting Sakhmet’s predator/prey dynamic and lack of emotions — she knows that if she hurts someone, it’s a weight she’s going to have to carry, and that’s not something she can run from. In light of our theories about Persephone being the Great Darkness, I’m curious to see if her changing attitude might help her escape her fate, or will only make her inevitable betrayal all the more heartbreaking.

As for Ananke, Drew’s right that this is the most noble we’ve ever seen her, but I’ve always suspected this part of her existed; if nothing else, it’s always seemed clear to me that Ananke thought she was doing the right thing, even if it meant making horrific choices. The letter itself is as frustratingly vague as anything she’s ever done, but in this scenario, that means that she’s writing to somebody just as knowledgeable as herself, someone who doesn’t need everything spelled out for them the way we do. Could this perhaps mean that there’s another figure out there like Ananke, a figure with power but not explicitly a part of the Pantheon? Or does it mean that one of the members of the Pantheon has been allied with Ananke all along?

Ending with the flashback to Ananke also creates an interesting structure: the issue is bookended by scenes featuring parental figures who are incapable of being there for their charges, those same charges who are floundering throughout the middle segment. Whatever her good intentions, Ananke’s secrets, cruelty, and frustration with the Pantheon led to her own undoing, while David blames himself for Jon/Woden’s issues.

David, though, is still proud, despite the fact that Woden is one of the more troublesome members of the Pantheon. I suppose that’s not surprising, a man who dedicated his life to studying the Pantheon rejoicing when his son becomes one of them, and I’d imagine his pride is at least somewhat influenced by his guilt (“Jon made something of himself, even if I failed him”), but it still makes David another adult who may have the information to help the Pantheon, but not the emotional capacity.

It’s a shame, because they could obviously use some guidance. The Pantheon have always been a metaphor for celebrities and creators, but in issue 28 more than ever before they’re framed as child stars, those poor kids who are thrown into a complicated, often damaging business without really being capable of understanding what they signed up for, if they had any say in it at all (much like how the Pantheon had no choice in their divinity). Not every child star winds up washed up, but the ones who survive are the ones with a strong support system, and I just don’t see any of the Pantheon having that. If anything, the last six issues have been a testament to how thoroughly Ananke has failed these kids; I have a bad feeling that, on the child star scale, they’re way closer to ending up a Dana Plato than a Mara Wilson.