There is no intimacy without vulnerability.

Ryan: I try to be a very honest person. I’m essentially George Washington with the cherry tree. Though, of course, I have to caveat that with admitting that I know the cherry tree thing is a myth. Sometimes facts are the enemies of fun. While I am truthful and people in my life find that both helpful and annoying, there is a deeper truth. I started this paragraph intending to say something and we are now at about seventy seven words, so I’ll come out with it. Vulnerability is something I struggle with every day. It’s not enough to refrain from lies, be nice to people, make sure that they are okay and carry on. You aren’t really present in a relationship until you are being truly honest about what you need, sharing your moments of shame, and peeling back the surface to reveal the parts of yourself that you aren’t sure will be accepted. In Sex Criminals 18, Matt Fraction and Chip Zdarsky explore the struggle to be emotionally honest.

Jon is keeping a big secret from Suze and rather than address it directly, he makes a series of purchases at Love Makers, eventually leading Suze to question whether he is stealing again to cover the costs. They have what she thinks is a heart-to-heart and things are settled if not okay. Robert and Rachelle have an actual heart to heart and things are better than okay. Meanwhile, Dr. Ana Kincaid is broke as a joke and has to don her Jazmine St. Cocaine persona at a porn convention. It’s a bummer for her, but it gives Zdarksy a chance to show us how much he can fit on one page.

The transformation of Dr. Ana Kincaid into Jaszmin St. Cocaine is contained over 64 wordless panels. Zdarsky places the reader as the mirror, witnessing each step of the preparation. The sequence doesn’t feel like a primping session so much as a warrior putting on layers and layer of battle armor. Ana’s expression is serious, she works with precision and no joy. It’s alone behavior, and Zdarsky waits until the last panel to give you the full view. In that final panel Ana is pretty much gone and Jazmine pouts out at us, offering a facsimile of a sexpot, with a mane of hair and a necklace that points directly to her cleavage. The page, along with being impressive for making a getting ready scene engaging, plays into the larger themes of the issue. Ana is only putting veils between her truth and what she is displaying to the world.

This continues at her nightmare of a convention in which she is treated less like a human and more like a sex bot by a series of men who Dr. Kincaid would destroy. Instead, as Jazmine St. Cocaine, she holds it together, earning the money to pay for her car and wearing down her fears to the point where she is ready to call the man who has been occupying her thoughts. Fraction abuts the scenes of Ana in character, so it’s even easier to recognize that the person addressing Dave is her true self. In case there is any further confusion, Ana literally strips naked as she asks Dave to dinner. We don’t see whether Ana’s honesty grants her a date, but her arc in the issue is going from denying her interest and laying it out baldly.

Robert’s honesty has more romantically successful results and allows Fraction to reinforce another element of the issue’s theme. Sex can act as a blind to mask fear of true vulnerability. Robert ultimately gets over his fear of exposing his true emotions to Rachelle, but it’s an act of bravery. The rest of the scene is his attempts to say what he wants to say without actually having to say it.

Fraction and Zdarsky set up Robert’s fear and neuroses in a previous scene, making his eventual honesty that much more satisfying. A faceless crooner sings the most depressing love song in Robert’s ear as he packs up Rachelle’s things in his apartment. We see Rachelle through his eyes in happier times and then other memories, more humiliating memories enter his thoughts. 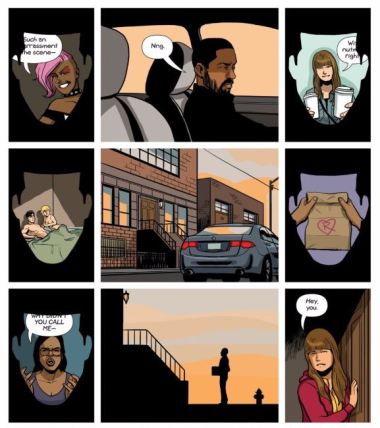 The layout of the page offers such clear insight into Robert’s frame of mind as he stand outside Rachelle’s door. Along the left, a series of panels, framed by his silhouette, that give small glimpses of failure in his past, the kind of memories that encourage shame. Meanwhile, Rachelle stands as the antithesis. It’s an efficient and effective way to let us understand Robert in a deeper way. We don’t need details of his past or even more than these sweet thoughts of Rachelle to know what he wants and why he may not believe he deserves it.

Drew, what did you think of the issue? Do the gross little big dick trolls chant of “why you follow me” mean jig is up for Jon?

Drew: Oh, without a doubt. Indeed, that was kind of the punchline to last month’s issue, such that more or less already knew Jon’s “sex vigilantism” (for lack of a better term) was going to be revealed to Suzie. In this way, the tension of Jon not telling Suzie is cast in this kind of inevitable pall, kind of a Chekhov’s gun in reverse. Adding the stakes after we already know the ending shouldn’t work, but in emphasizing that Jon wasn’t just omitting the truth, but actively lying, effectively shifts our read of that final moment. What was a kind of absurd non-sequitur suddenly becomes a profound betrayal of trust — a kind of microcosm of this beautiful, hilarious, heartbreaking series.

But as you say, Ryan, Jon isn’t the only one struggling with being honest. There’s a moment early in the issue, where both Jon and Suzie are perpetuating a kind of mutual lie, all for the sake of avoiding what could be an awkward conversation.

It’s an exchange that’s likely familiar to a lot of folks, and one that’s tricky to navigate, even for the most honest of us. These are two characters who are in a committed relationship, intimate in every sense of the word, but saying exactly what they want in the bedroom is still a little embarrassing. There’s fear of rejection mixed with fear of insulting one another for not being “enough.” Suzie cycles through a variation on that latter insult when the overwhelming quantity of Jon’s sexy gifts forces her to consider the line between predilection and fetish. Is she what Jon wants? 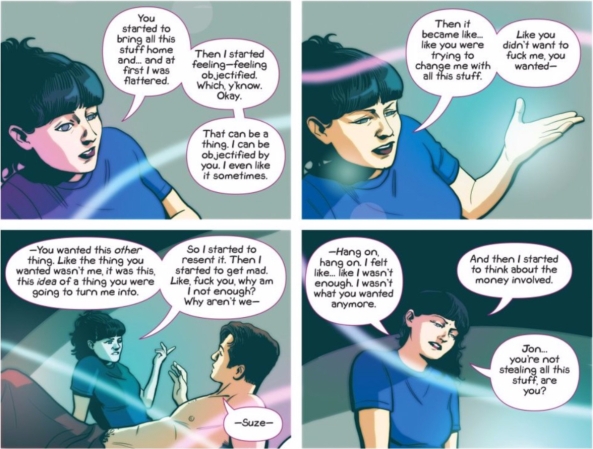 That he might be stealing these gifts (or stealing the money to pay for these gifts) is almost a secondary concern. Er — it might represent some deeper trust issues these two have, but the thing that even sets Suzie down that path is the feeling that she wasn’t enough for Jon. The sheer volume of these gifts does eventually lead to the question of “how,” but Suzie’s initial concern is more focused on “why.”

And that’s where the real emotional connection happens. Jon stumbles over his words a bit, admitting that “this is hard,” but manages to explain that the gifts were more about demonstrating effort — about showing that Suzie is thinking of him and desiring him. It’s an emotionally naked moment that’s swiftly followed by Jon lying once again, denying that he’s picked up his pursuit of Kegelface. It’s a wrenching left turn for that scene (one that was definitely undermined a bit by the fourth-wall-breaking winks to the audience about song licensing), setting clear stakes for the reveal we already knew was coming.

For all of the emotions in this issue (the Robert and Rach stuff was also top-notch), my favorite sequence had to be all of the jokes packed into Ana’s time at “Sexxporgascon.” As the name of the event suggests, it’s kind of an elided amalgamation of every expo/convention you can imagine, packed with the kind of visual gags that have come to define Sex Criminals.

I mean, really, this single panel has more jokes in it than many other series can muster for a whole issue. My favorite, though, has to be Ana’s banner — she obviously doesn’t have one for this purpose, so she’s simply adapted the one she’s presumably taken to academic conferences. It distils her fall from grace down to a single image, capped off with “don’t fucking touch me” — the purest expression of her contempt for her audience.

And her audience is pretty contemptible. Throughout the event, she’s insulted, assaulted, and treated like a prop. It’s a degrading experience, but one I suspect is familiar to Fraction and Zdarsky. Not that they necessarily share Ana’s unbridled resentment for her fans, or that they face anything near the objectification she does, but after seeing Zdarsky’s nonstop line at C2E2 this past weekend, I have to imagine that these sentiments aren’t entirely fictional. I mean, the fact that at least part of Ana’s fame did come from a project titled “How-hard the Cuck” isn’t a coincidence. Remind me not to look at Zdarsky while he’s eating.

But I guess that’s this series in a nutshell — even when it’s taking a break from the emotional honesty, there’s still some emotional honesty in the jokes. It’s goofy and fun, but these characters are still grappling with real emotions, even if they’re doing so after time has stopped because of their magical orgasms. It’s a tone only this series can strike, but so long as it continues to do so this well, it’s really all the world needs.