We try to stay up on what’s going on at Marvel, but we can’t always dig deep into every issue. The solution? Our weekly round-up of titles coming out of Marvel Comics. Today, we’re discussing Hawkeye 6, Spider-Gwen 19 and Unstoppable Wasp 5. Also, we discussed Jean Grey 1 on Thursday and will be discussing All-New Guardians of the Galaxy 1 on Monday and Secret Empire 1 and Black Bolt 1 on Tuesday, so come back for those! As always, this article contains SPOILERS.

noun
1. a person who is admired or idealized for courage, outstanding achievements, or noble qualities.

Drew: It goes without saying, but “noble qualities” are in the eye of the beholder. What one person views as noble, another might view as crass or naive. And yet, the majority of heroes in western culture are remarkably similar: stubborn idealogues who refuse to back down. (Oh, and they also all tend to be white dudes.) Steadfastness certainly can be a noble quality, but in an age where ideological differences so quickly curdle into tribalistic dogma, we may be in more dire need of compassion and empathy. Those are traits Kate has in spades, and become increasingly handy in her team-up with Jessica Jones.

Writer Kelly Thompson plants the seed early on, allowing Kate to joke about the burden of helping people she doesn’t like very much. 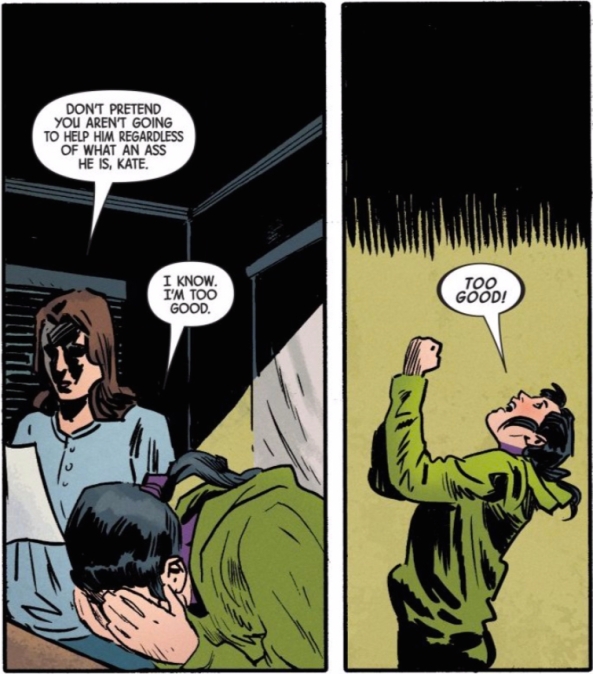 It’s the kind of ideological conundrum we might expect of any hero — the obligation to help those in need is more important than the hero’s personal opinions — but it’s also much easier to implement in this abstraction. When put into practice, when an actual dragon is threatening the lives of innocent people, exactly what “noble qualities” kick in end up defining our heroes.

For Jessica Jones (who is about as stubborn as it gets), that means punching dragons, but for Kate, the compassion extends that extra bit further to reach out to her would-be enemies. She’s not compromising her values at all, she’s just seeing the humanity in her opposition and building on some common ground. It’s a truly heroic quality, and ends up being a much more effective solution than Jessica’s fists. I’ll spare making the easy “hero we need” joke, but, y’know, let’s see Batman do something like that.

Spencer: Spider-Gwen‘s greatest advantage over other superhero books from the Big 2 is that Jason Latour, Robbi Rodriguez, and Rico Renzi have an entire alternate universe that they can shape however they please without worrying about other titles’ continuity. Not only does this create the opportunity for plenty of exciting cameos and re-imaginings — this month brings us new takes on Wolverine, Venom, and Elsa Brock — but for some of the most complex world-building on the stands. It’s mostly a blessing, but occasionally a curse — reading Spider-Gwen feels like immersing myself in a fully-realized world, but keeping its story straight takes three times the brainpower of almost every other title I follow.

Coming off of a three month crossover, Spider-Gwen 19 is more bogged down by the weight of its own plot than usual, devoting more than half of the issue (five pages in Captain Stacy’s jail cell, seven pages in Osborn Tower) to explicitly spelling out Matt Murdock’s plans, Harry Osborn’s current status, and the science behind Venom. It’s no doubt necessary to get this new storyline rolling, and I appreciate that the creative team do their darndest to keep things light through humor and strong character beats, but it’s still an almost overwhelming amount of exposition. I can’t help but wonder if there’s a more intuitive way to deliver all this information, even if that just means splitting it up and doling it out in bits and pieces throughout the storyline. As much as I appreciate the attempt to get everybody on the same page, we really don’t need to know every single fact here up front, right?

With all that exposition out of the way, though, I suspect the rest of this storyline will move at a much more manageable pace. In the meantime, it’s the little moments in which Spider-Gwen 19 excels, from the Mary Janes piecing together the clues surrounding Gwen to her choosing to help Osborn because he reminds her of her own father to even simple details such as the sound effects.

Yup, even seemingly minor notes like this do a lot to make Spider-Gwen‘s world feel real and stand out. This is such a unique and distinctive title, and if keeping it that way means that it occasionally tries to do too much or simply has to lay things out a bit inelegantly, I suppose that’s a small price to pay.

Patrick: For someone with so goddamn many secrets, Nadia is quick to reveal herself to others. That appears to be one of the driving forces behind her decision-making in issue 5 of Unstoppable Wasp, which finds her old world (Ying and the Red Room) colliding with her new world (G.I.R.L.).

Writer Jeremy Whitley writes Nadia with so much honesty, it’s almost subversive. If the character has a self-preservational bone in her body, it’s sophisticated enough to recognize the social value of telling the truth over a cascade of ass-covering lies. And, like, Nadia’s got shit to hide. She puts her science gathering on hold to lay her cards out on the table: she and Ying are former assassins and former evil scientists. No deceit, no excuses, no apologies — simply a statement about who she is and who she was. This ends up being one of the most relatable moves in the issue, as Nadia invokes G.I.R.L.’s empathy the same way Whitley and artist Elsa Charretier do — through drawings. 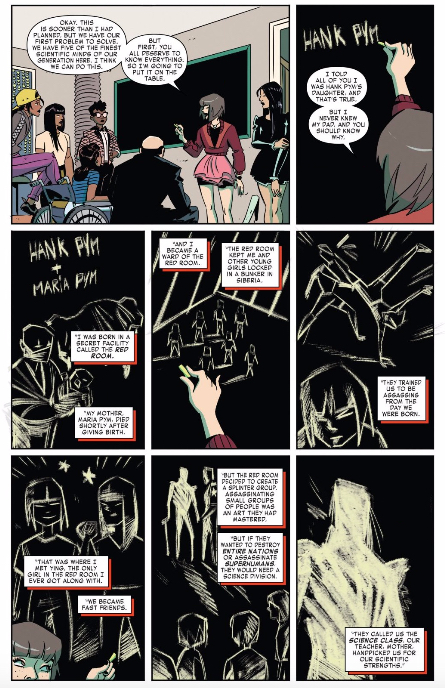 Because Nadia is using the same tools as our storytellers, it’s hard to separate her depictions of the truth from the literal events taking place within the issue. In effect, it makes her confession feel more real, because we are experiencing it in much the same way the girls of G.I.R.L. are.

Man, that makes me nervous about Nadia executing on a plan that requires a little deception… The character has been so honest and so earnest that it seems insane that she’d be able to turn it off, even for a second!