Drew: I’m a bit of a sucker for a good twist, which is at least a part of why I love Cannibal so much. I was absolutely tickled by the twist at the end of issue 3 — a twist that was quickly outdone with the much larger one at the end of issue 4. If issue 3 was a proof-of-concept for the notion that anyone in town could be a cannibal, issue 4 demonstrated just how devastating one of those reveals could be. Issue 5 continues the pattern, revealing yet another cannibal in our cast, but shifts the reveal forward a couple pages, reminding us that this series is more than just a sequence of jaw-dropping surprises.

But first, we have to deal with the fallout of issue 4’s twist. Jolene is absolutely disgusted with having killed and eaten one of her rescuers, but she barely has time to process it before she has to do something about the other one. Artist Matías Bergara captures every beat of that anguish in agonizing detail. 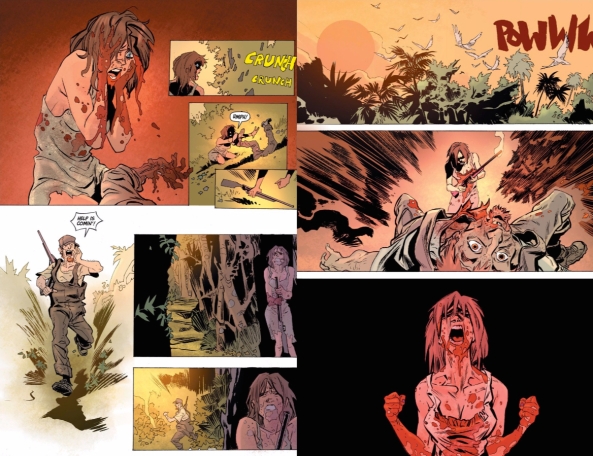 Bergara has absolute control over these pages, breaking them in to three discrete sequences, each one breaking down further into its own three beats. It gives these pages a very clear sense of rhythm, all built around clear cause and effect, as if each moment were connected by a “but” or “therefore”. In the first sequence, for example, we have 1) Jolene’s horror at what she’s done turn to 2) fear of being caught, followed by 3) her efforts to avoid discovery — a description that we can basically blow up to describe these sequences collectively.

It’s hard to pick a favorite, but I absolutely love the way Bergara builds tension in the second sequence, breaking away from Jolene to introduce her would-be rescuer, only to cut back to Jolene, now hiding in hopes of avoiding detection. There’s tension in that simple cat-and-mouse — especially since we kind of care about Jolene, even though she just killed a guy in cold blood — which gets amped in that third panel as those two elements are juxtaposed, placing both in space while also cutting in for a closeup of Jolene’s terrified grimace. Of course, the tryptic structure only works because of that big “therefore” — this sequence and its tension needs the ugly release of Jolene killing this innocent man to cover her tracks. It conveys the depth of Jolene’s fear, driven home by her anguished cry in that final panel.

And us being invested in (but also horrified by) Jolene is key at the end, too, as she approaches an unwitting Cash. I’m not exactly worried that she’s going to attack him, but I think the fallout of him learning she’s a cannibal could be every bit as devastating. Maybe it won’t drive a wedge between the two of them (just as it hasn’t between Sheriff Mays and his son), but I can’t see it ending well — they’ll almost certainly suffer if/when anyone learns their secret.

But enough conjecture — there’s enough going on here to sink our teeth into. As the start of an arc, there’s quite a bit of place-setting, though writers Jennifer Young and Brian Buccellato are smart to shake up the status quo here. Roy and Boone are developing a kind of grandfather/grandson dynamic, and Giles and Louise are hooking up, all of which might make Danny’s eventual release from prison a bit stickier.

Of course, Danny’s release may not be as inevitable as we thought. There’s something truly terrifying in the way Deputy Mays and Danny’s eyes meet before they both start devouring Danny’s cellmate, but the obvious shocker here is that Danny is a cannibal, too. It’s a reveal that makes a lot of sense in hindsight, explaining Danny’s choice to suddenly abandon his home life (and perhaps what happened to Boone’s mother), but not something I had even considered. But I guess that’s the point, right?

Patrick, I have to imagine that there’s a point of diminishing returns of revealing cast members to be cannibals, but I don’t think we’ve reached it yet. Or maybe I’m just so enamored of those reveals that I’d forgive them flying off the rails a little bit. But I’m curious if this one worked for you. As I mentioned earlier, the structure of this issue kind of deemphasizes that reveal a bit, which I think is a fascinating choice — the twists might keep coming at the same pace, even as the series renews its focus on the relationships of its characters. That actually sounds like a sustainable way to keep those twists coming, which is sure to keep me happy. Are they still working for you?

Which of course leads us to this question: is everyone a cannibal?

I think that’s a) totally possible and b) a way in which the twists are functioning properly. They’re no longer meant to shock and delight us by turning the readers’ expectations on a dime, they’re meant to overwhelm with a cyclone of narrative uncertainty! In my experience with this series, that uncertainty dovetails perfectly with one of my frustrations with the characters. There are so many characters with similar-enough designs and non-remarkable names that it often takes me a few reads to re-orient myself in the world of Cannibal. I was elated that Drew used Jolene’s name in his portion of the write-up, because I’m not sure it even appears in the text of this issue. And that character is central to just about everything else that happens in the issue.

That sounds an awful lot like I’m complaining about being confused by this issue — but that’s not my intention. I am frequently unsure of what I’m supposed to make of a moment or relationship, but Young, Buccellato and Bergara are all to happy to throw those moments of confusion into sharp, clear focus with their world-defining twists. Drew did a great job of guiding us through Bergara’s mastery over that opening scene, but I want to look at another example from later in the issue: Jolene’s flashback.

My confusion settles in quick — Jolene is complaining to her Grandmother, presumably about Cash. But they both speak in terms that are incredibly vague, including Granny using the phrase “what’s meant to be will be.” That’s the conversational equivalent of a shrug. Check it out: even Jolene is bored in those last two panels on that page. But then we shuffle over to the next page where Jolene sees a hitchhiker on the road and suddenly, everything becomes clearer. I love the way Bergara sets this up in just four neat panels. 1) She sees the hitchhiker on the road. 2) She adjusts the review mirror so she can see him as she passes, and a simple “huh…” escapes her lips. She’s considering it. 3) This is the big one: she turns around. Bergara gives us a literal twist in a characters path in the form of this u-turn. In fact, Bergara eliminates everything else in that panel, it’s just the car and the u-shaped dust it kicks up. By panel 4, she may be smiling and asking helpful questions, but we know full damn-well she’s about to eat this poor sap.

So, in the case of Cannibal 5, clarity comes from the storytellers’ commitment to the series’ concept. We can look at the scene between Roy and Boone as another example of this. The scene starts off cute, but strangely, as Boone can’t seem to move off the colloquialism “The early bird catches the worm.” It’s classic kid stuff, and not without its own charms, but it falls into this same sorta boring, sorta circular logic path that Jolene’s conversation with Granny did. The page is also bathed in the naturalistic greens of the swamp, so even Buccellato’s coloring is suggesting that this outing is mundane and unremarkable. Of course, that’s interrupted on the next page — note the color change.

Gross, right? Boone (whose eyes are covered in this moment) offers the innocent, boring explanation for the trap at the exact same moment we see the gruesome reality. This trap is a twist of its own, whipping the reader up into a frenzy of confusion where the only thing we can reasonably expect is violence. That is, of course, what makes that final page reveal of Jolene looming over Cash so terrifying. What’s more routine than lovers reuniting? We know what that mundane drama portends, and it ain’t pretty.