Mark: It’s easy to take post-Crisis Alfred Pennyworth for granted: faithful household butler to Thomas and Martha Wayne who takes young Master Bruce under his wing as a surrogate father, guiding Bruce through the toughest years of his life. Alfred is Batman’s Batman, the person responsible for keeping the trains running on time, and the last man standing in Bruce’s corner when everyone else is against him. This characterization of Alfred is so ingrained in our consciousness thanks to the movies, animated television shows, video games, and, of course, comic books that have released post-Crisis, propelling the Bat Family’s cultural cache into a larger multimedia stratosphere than they’ve ever experienced before. But like most comic books characters, the Alfred we now know is not the Alfred that always existed.

Alfred Beagle, as he was originally known, was introduced in 1943’s Batman 16. The Alfred of this era was comedic relief — a portly, clean-shaven man who fancied himself a would-be detective. Yes, he was manservant to Bruce and Dick, but he was also Mister Magoo-ing his way through investigations of his own. It wasn’t until the Batman serials gained popularity and Alfred was portrayed by actor William Austin that DC aligned the comics with the Alfred physique we know today: trim with a signature thin mustache. Alfred was a former actor and intelligence agent who came to Wayne Manor at the dying wish of his father, Jarvis, who had served the Wayne’s for many years. In fact, in the pre-Crisis continuity, Alfred (whose last name eventually became Pennyworth) discovered Batman and Robin’s secret identities completely by accident; initially because he accidentally hit a switch and discovered a secret passageway to the Batcave.

It wasn’t until Crisis on Infinite Earths rebooted the DC universe in 1986 that Alfred became the Alfred Pennyworth we know today…mostly. Like most comic book characters, Alfred continues to evolve slowly with every new comic book that he appears in. Small choices that creative teams make influence other creators, and these choices accumulate over time, subtly changing and molding characters in ways that aren’t noticeable in real-time. Scott Snyder has become the godfather of modern Batman at DC, and even though he’s stepping away from writing Batman on a regular basis after All-Star Batman 25, his influence will be felt for years to come. It’s too early to say what kind of potential influence “Ally,” the arc kicking off in All-Star Batman 10, will have on Alfred Pennyworth long-term, but it’s an intriguing beginning that makes me eager to find out. 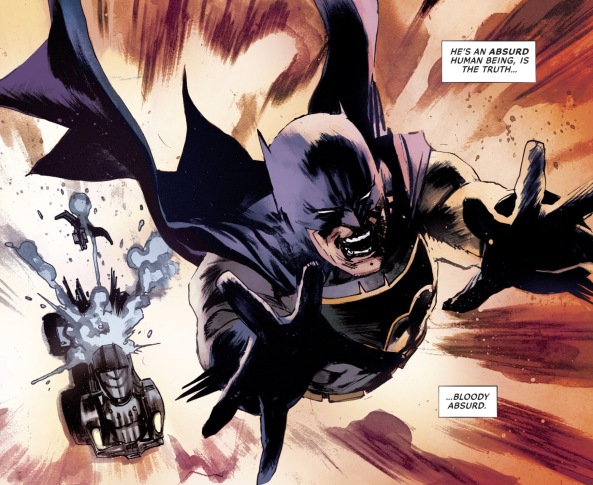 The issue alternates between two stories. One, set in the past, follows the London police on a rooftop chase of a young hooligan. The other is set in the present, and is a fairly typical Snyder Batman story — not a knock in any way, since Snyder knows how to write a solid Batman action sequence in his sleep, and Rafael Albuquerque’s killer art compliments it well with clear action and bold colors. But while Batman and Alfred’s pursuit of Hush is the most exciting sequence of the issue, the flashback to London is set to have the most influence moving forward. The hooligan, after all, is a young Alfred, and some connection to his past is about to be a major factor moving forward. It’s an exciting opportunity for Snyder to forge new ground, since Alfred’s early years have never been given much notice before. The possibilities are endless, and I have no idea what to expect next.

What’d you think, Michael? I didn’t dive too deep into the business involving Hush, mostly because he bores me as a character, but how about Bruce’s trip to Fort Dexter?

Michael: Aww, no love for Hush? I know that Batman: Hush is pretty Jeph Loeb, The Long Halloween-formulaic, but I still find it entertaining; it’s what got me deep into monthly comics in the first place. With this in mind, I was delighted to see Dr. Thomas Elliot’s bandage-covered face again, in Jim Lee’s original H-branded jumpsuit no less. What delighted me even more was how All-Star Batman 10 seemed to gloss over the silly Batman Eternal revamp of Hush and instead continue with Paul Dini’s iteration of the character: having surgically-altered his face to impersonate Bruce Wayne.

I think that Snyder handled Hush extremely well by not making him the central focus of the plot, but instead a vehicle of it. What I really want to know is if Alfred actually reversed Elliot’s plastic surgery. I thought that was a perfect solution for Bruce’s Hush problem and totally in line with the wickedly sardonic Batman of All-Star Batman. I’ll be a little disappointed if it was just an empty threat.

In my brief write-up of All-Star Batman 9, I recognized that this series isn’t gripping me as much as Snyder’s previous Batman run. Most of the issues are action-packed and entertaining, but the narrative boils down to a lot of pomp and circumstance. While I think that All-Star Batman 10 is an improvement upon its predecessor, it also contains several flourishes of Snyder’s that have grown to be a little tedious.

First off is Snyder’s fondness for weaving in historical background for Batman’s surroundings. Bruce goes into great detail about the meaning behind Fort Dexter. I understand that Bruce is a methodical computer man who knows everything about everything but Alfred is doing the brunt of the narration here. Personally, sometimes I find Snyder’s factoids to be a bit gratuitous.

More to the point, it feels like too often Snyder places a McGuffin at the center of Batman’s struggles — in All-Star Batman, it’s “The Genesis Engine.” Don’t get me wrong, McGuffins are a great way to get both creators and readers to focus on character over plot, but there’s an excess of them in the world of Snyder’s Batman. At some point, we should get some concrete driving forces that aren’t vague plot devices. Maybe Snyder’s techno McGuffins are too overly-complicated or maybe I’m being too harsh…but I’m too stubborn to let it be both.

Ok, now that that’s out of my system, I’ll move on to what I liked about the issue — which is actually a lot! I’m completely on board for an Alfred-centric tale in All-Star Batman 10. It reminds me of Snyder’s early work on Batman in Detective Comics; he wanted to tell a story about Commissioner Gordon but knew he also needed the action and appeal of a standard Batman story.

There’s an effortlessness to Snyder’s approach to Alfred’s ongoing internal monologue. I had great appreciation/admiration for the way that Alfred nonchalantly referred to Bruce as his son. A more ham-fisted, heavy-handed script would’ve placed an overabundance of emphasis on that line but Snyder states it matter-of-factly and moves on with the narrative.

I was almost positive that Alfred was going to end up being the young man in the mask running from “the bobbies” but dammit if Snyder didn’t make me second guess myself. I’ll admit that for a minute there I was genuinely fooled by the overlapping narration, thinking that this was a young Bruce Wayne flashback. After all, we had an angry young man defiantly giving the middle finger — a hallmark of Zero Year Bruce Wayne.

It’s almost a shame that this isn’t a more Batman-centric story because I really enjoy Rafael Albuquerque indulging in his horror genre skills to draw a menacing and frightening Batman. I mentioned my fondness for Bruce’s “reverse plastic surgery threat” earlier, which is only highlighted by Albuquerque’s pencils and inks. The operating room aesthetic of one blinding fluorescent light among the shadows places Bruce, Alfred, and Elliot in a virtual interrogation room where Bruce is most definitely the bad cop. And for you Hush haters out there, there’s a potential read of the shortcomings of Tommy Elliot as a character: he is afraid to be himself/creators are afraid to use him because there’s not a whole lot there.

On the flipside of my Snyder factoid argument, I quite enjoyed the explanation behind Bruce’s painting/shield. This was an example of classic Bruce Wayne and Scott Snyder working hand-in-hand: both have an overconfidence and over-preparedness about them.