Today, Drew and Patrick are discussing The Old Guard 4, originally released May 24th, 2017. As always, this article contains SPOILERS.

Drew: “The grass is always greener on the other side” is a remarkably ambiguous idiom. Is it about the subjectivity of our perspective (that is, things simply look better from a distance), or perhaps about some kind of psychological phenomenon that makes whatever it is we don’t have more appealing? Whatever the cause, the analogy works only insofar as we can flatten our value system to some kind of parallel for “greenness” — there’s no real acknowledgement of either side having pros and cons, or the choice between the two representing a compromise. Still, the phenomenon of the grass being greener on the other side still pervades our culture, reflecting a superficial, one-dimensional understanding of real-world choices we too often adopt. Such is the case with both Steve Merrick and Andy, two characters who might gladly trade sides for each other’s greener pastures.

Merrick’s desires for immortality are classic supervillain stuff. He enjoys his life, and is willing to exploit any means at his disposal to extend it, even in that means killing (or torturing, as the case may be) Joe and Nicky. Greg Rucka and Leandro Fernández offer a memorably mustache-twirling introduction to the character, but he’s close enough to characters we’re familiar with to get him at first glance.

Andy’s wistfulness, on the other hand, bears a bit more exploration. We’ve already seen glimpses of her past, and gotten plenty of her bitter, cynical present, but Rucka and Fernández open up a specific chapter of her life, chronicling her relationship with Achilles, compressing a lifelong love affair into a breathless six pages.

Rucka and Fernández make perfect choices throughout this sequence, compressing and dilating time so effortlessly, it evokes that heartbreaking montage that opens Up. I’m particularly enamored of the structure in this double-page spread. The three panels at the top of the second page establish a routine that persists accross time — an effect that is beautifully heightened by the very next panel, which evokes the panel in the bottom left of the previous page. We can see their comfort and familiarity, even as we witness how time is affecting them differently. Truly stunning stuff.

I’m also impressed at colorist Daniela Miwa’s choices throughout this sequence. Where other colorists might opt to desaturate these memories or render them in sepia tones, Miwa opts to distinguish these memories in a much subtler way. In basically every other scene, Miwa cues into the lighting and setting, washing whole pages in blues, reds, greens, purples or pinks.

That approach can’t work for a sequence that needs to skip accross time and space (at least, not so long as Miwa wants to make that clear), so instead we get more literal, straightforward colors in the montage, giving those six pages an entirely different feel without relying on the cliched signifiers we’re already so familiar with.

So: yeah, that flashback totally blew me away. It goes a long way to explaining Andy’s gruff demeanor, as well as kind of backdooring in an explanation for why anyone in her position might be ready to die. Obviously, we don’t suspect Booker of anything until it’s too late, though Fernández foreshadows his turn beautifully, just as Nile begins to get a little suspicious.

I can think of no more ominous way to depict a character than silhouetted with his weapon, creeping up on his teammates who are questioning his loyalties. It doesn’t quite give the game away, but it primes us for Booker’s betrayal, which he justifies by saying he’s just “trying to end it.” That’s not an intuitive motivation from our mortal perspective, but with Andy’s flashback in mind, it’s certainly understandable.

Indeed, in hindsight, this whole issue works as a justification of sorts for Booker’s turn here. It’s not yet clear to me why Merrick couldn’t have just settled for the apparently suicidal Booker (and the answer may end up just being “supervillain reasons”), but that’s more than satisfying enough of a cliffhanger to keep my interest piqued. Throw in some fantastic art, and I’m as excited for this series as ever. Did this issue work as well for you as it did for me, Patrick?

Patrick: Oh, absolutely. That flashback sequence is really one of the best. I love its placement and purpose in the issue, as well. We’ve gotten a lot of character flashbacks as Andy narrating them directly to the reader — the sort of non-diegetic storytelling that you’d see on LOST to fill in the survivor’s histories. Andy’s still not telling this story to any characters on the page (Nile walks away before the flashback starts), but the story is directly triggered by a conversation she’s having with Nile. And that conversation is a beautiful demonstration of Rucka, Fernández and Miwa’s abilities. The gutters of these first three pages are a kind of dawn-blue — the color of sky right before the sun rises. That is such an unusual color choice, and it’s not matched anywhere on these three pages, not even in the panels which shows us the entire verticality of the early morning sky.

Lining that panel up against the five horizontal panels on the left side of the page quietly marries expanses of space with expanses of time. This is important, because what these characters experience most profoundly in their immortality is loneliness.

And that loneliness-by-glut-of-experience is exactly what Andy identifies in Achilles. Andy’s narration carefully charts his course from one corner of the globe to the next, weaving in and out of world-defining events and institutions — slavery, the American Revolution, exiling prisoners to Australia — and tops it all with the observation that “he wasn’t even thirty.” Drew already pointed out how lovely the pages they have together are, which makes Andy’s dismissal of their portrait later in the issue that much more devastating. 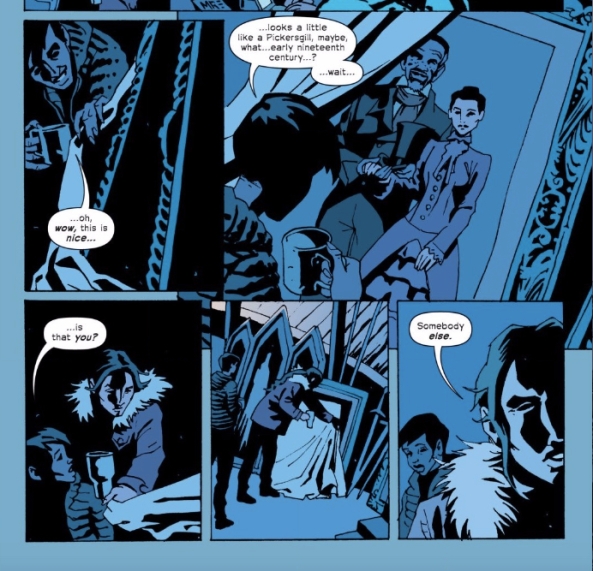 First, let’s take note of that gutter color — it’s back! This time, Miwa’s not being quite as assertive with her lighting and color choices, bathing the page in the cool blues and blacks of a cave lit only by a computer screen. Nile comes across the portrait of Achilles and Andy, and we’re immediately bounced back to a comment Andy made to Niles earlier in the issue:

“You’re lucky Nile. Nicky, Joe, me, me just got memories, and those don’t last. Hell, even Booker was born twenty, thirty years too early to have a picture of those he loved.”

But here we are: a picture (or painting, I suppose) of someone she loved. Andy denies that the woman in the picture is her, so it’s not even like the evidence is any stronger than the fragile memory itself.

That actually dovetails nicely with my over-all read of this issue, which is that the emotional stuff is strong and rings true while the advancing plot remains more obtuse. Andy very tellingly doesn’t have a plan for approaching Copley’s office. She approaches the desk like she’s the first wave of an Ocean’s-style heist, but immediately goes for violence. Fernández, as ever, is a stoic genius, drawing both the sweetness and the violence in identically staged panels.

Fernández always gives us these beautiful, artful renditions of the past juxtaposed against such cold and distant depictions of the present. I suppose that’s actually one of the advantages of living forever: you’re got so many more memories you can view through rose-tinted glasses (if you’ll pardon the color metaphor in a piece that discussing the literal use of color). This Booker Heel Turn is unfortunate for our characters, but I found the telegraphing of it to be a little obvious. I’d use the word “clumsy” if I didn’t think it was done on-purpose. It is only in those flashbacks where stories are neat and tidy and elegant. Even for immortals, the present is stupid, cruel and pointless.