Spencer: We live in a world with more distractions than ever. It’s easy to see why — in a world as tumultuous, unjust, and downright screwed up as the one we’re all stuck with today, people need distractions (be they media, parties, sports, etc.) in order to retain their sanity. Too many distractions, though, can have the opposite effect, clouding our judgment and obscuring who we truly are. Some even use these distractions as a form of self-medication, trying to run from problems that are only going to get worse if not faced. Sophie Campbell, Bobby Curnow, and Pablo Tunica’s Teenage Mutant Ninja Turtles Universe 10 explores both those situations, helping its heroes find strength in what’s real, not glamorous, excessive distractions.

Alopex and Angel are still trapped within the Toad Baron’s non-stop party dimension (imagine a Miyazaki film crossed with The Wicked + The Divine‘s Dionysus and just a sprinkle of Futurama‘s Hedonismbot), their escape attempts not just hampered by the Baron’s sheer power, but by their own wavering will. 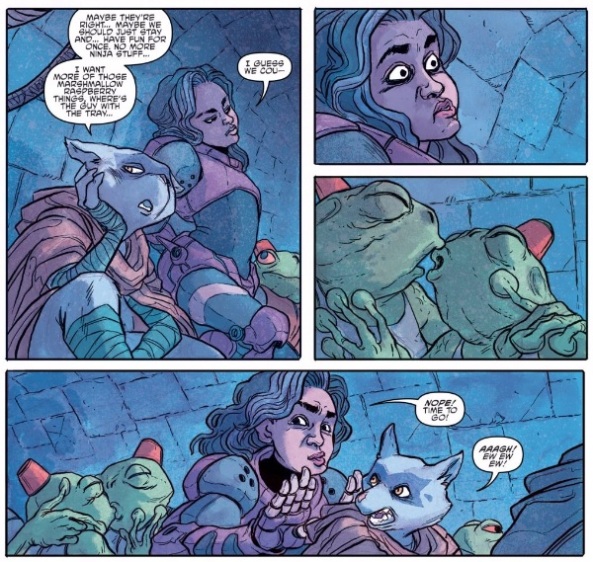 The Toad Baron’s world is the ultimate escape, the ultimate distraction; this issue’s opening page finds men and women from all throughout history who have found a refuge of sorts in this world, and who have no desire to escape. Alopex kicked off last month’s issue wondering if she should bother returning to the Turtles’ chaotic world at all, and the Baron’s world would seemingly provide just the out she was looking for in Northampton. She’s tempted to stay, and though it’s some gross frog-smooching that snaps her out of it in this particular instance, what truly helps Alopex and Angel stay focused on escaping is remembering what’s real. 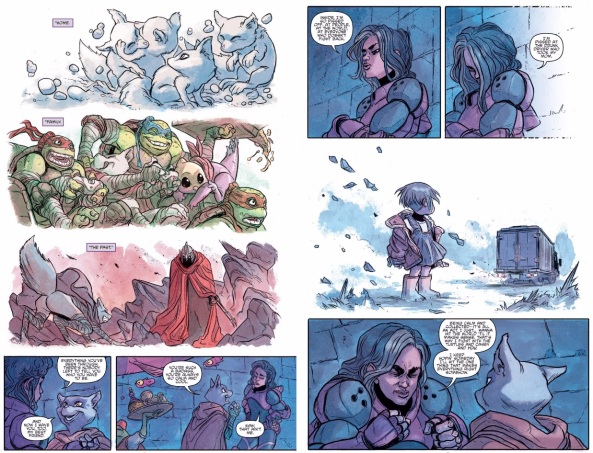 What’s real isn’t always fun; it’s often painful, in fact, like poor Alopex’s run-ins with Kitsune or the loss of Angel’s mother. But it’s those very situations that have shaped these two women into the people they are today, given them friends they can count on and the motivation to help others. Losing themselves in the Baron’s hedonism would let down the Turtles and let down each other as well. They want to take control of their lives and make choices they can be proud of, not rely on the Baron as a crutch.

It seems incredibly important that Alopex calls Angel her “best friend” right in the middle of their sharing their most painful memories. True friendship, friendship that lasts, is built on openness and emotional honesty. It’s a risk to open up to someone, sure, but friendships built on the superficial are always going to remain rather superficial. Not every friendship needs to be a confessional, true, but everybody needs somebody they can confide in and be honest with; life is rather lonely without them. That’s certainly what the Toad Baron has discovered, even if he doesn’t fully realize it. 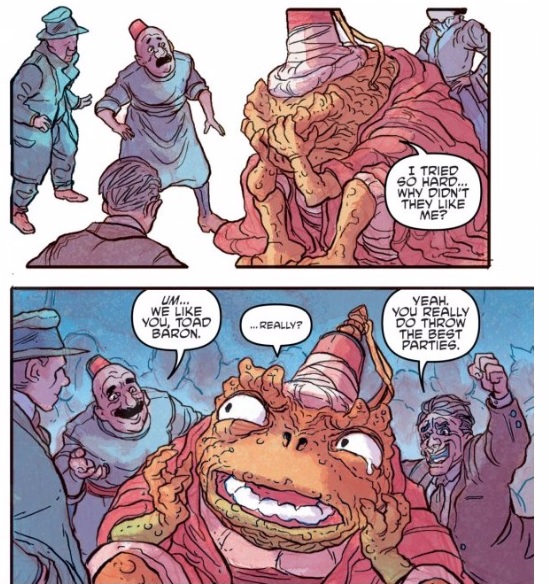 I love this moment so much, because for the first time, it grounds one of these immortal beings in true human emotions, and truly human flaws. Toad Baron doesn’t party just because he loves to have fun or whatever; he parties because he’s lonely, and the only way he knows how to make friends is to impress them how much stuff he has and how much fun he can provide. Patrick mentioned in our discussion of issue 9 that Toad Baron lacks emotional intelligence, and I think he hit the nail on the head with that assessment. Under different circumstances Toad Baron might come across as generous, but not when he’s essentially trying to buy people’s lifelong friendship with food and parties and trinkets. A true friend wouldn’t need an eternal bribe to stick around, but Toad Baron doesn’t have the capacity to make friends who like him for him, and not for his stuff (and the fact that Toad Baron’s “friends” are so easily swayed by Alopex and Angel’s fight proves that their main priority is their own pleasure). Given his reaction to Alopex and Angel’s “rejection,” I think Toad Baron may realize how lonely he is deep down, but as long as he tries to drown his loneliness in eternal partying, he’ll never be able to grow and heal. By returning to reality — and, eventually, to NYC — that’s exactly what Alopex and Angel have chosen to do.

These past two issues have been my favorite TMNT Universe story so far, not only creating a strong standalone tale, but using that story to progress the main TMNT title’s plot while also further developing its secondary characters. Alopex has been a complex character for a while now, but this story really helped me understand Angel in a way I didn’t before, and I appreciate that. Tunica’s art, of course, is what really makes this issue sing, creating not just the surreal whimsy of Toad Baron’s world, but selling the character beats as well. 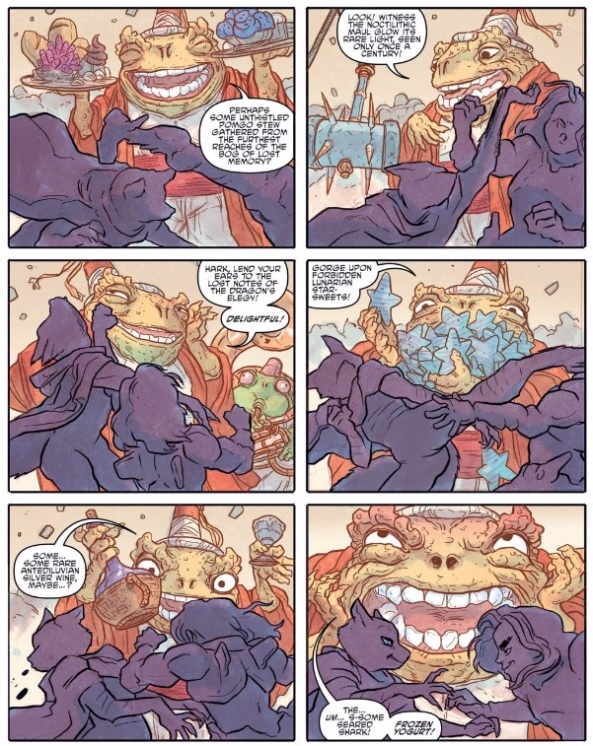 This page, for example, is just tremendous. The two different plains of activity and the cocky grins on the girls’ faces in the final panel are both fantastic, but I’m most enamored by Toad Baron growing increasingly frantic in the background. Breaking the scene down into six panels allows us to watch Baron’s breakdown progress beat by beat, truly driving home how desperate and deluded he is. This is the first real sign of how surprisingly complex Toad Baron actually is as a character, and Tunica, Campbell, and Curnow all deserve praise for pulling that off.

So Ryan, were you as pleased with this story as I was? What’s your favorite detail of Toad Baron’s weird, weird world? Do you have any thoughts about Campbell’s heart-achingly adorable Pepperoni back-up? For such a short, fluffy story, it’s surprisingly smart; I think most TMNT fans have imagined themselves fighting alongside the Turtles at some point in their lives, just as Pepperoni does here.

Ryan M.: Yes, the Pepperoni back-up allows the issue to end on such a sweet moment that reinforces one of the major themes of the issue. There is a gulf between our inner lives and what others see. What is confusing and plain adorable from the outside is really Pepperoni expressing a desire to be a warrior. This idea is made explicit with Angel earlier in the issue, when Alopex comments on Angel’s calm only to be corrected. The outer appearance is not always a reflection of what is truly happening.

The tickled man is a great example of how the world of Toad Baron is not quite as jovial as it seems. 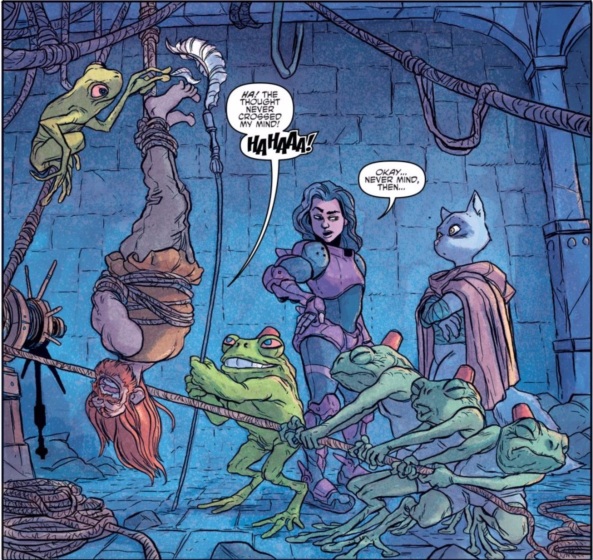 Watching someone get tickled is always a weird experience. You are looking at someone laughing and perhaps smiling, but there is an underlying sense of helplessness and potential for violation. The power imbalance is significant and the tickled has no control as to when the “fun” ends. This image of the man hanging upside down from a device reminds me of how a Bond villain would keep you while he explains the details of his plan. It’s elaborate and keeps the laughing man completely out of control, even as he seemingly enjoys himself. This panel functions as a segue between the testimonials from the happy guests at Toad Baron’s never-ending party and our heroes who know that things are not right. Tunica adds more contrast to the supposed joy of the scene with the expression on the lead frog’s face. He is not simply having a good time, he looks dangerous with his squinty eyes and too-wide smile.

While this party is obviously not the place for Alopex and Angel, it seems to be a fun time for a lot of the guests. My favorite bit was Tony Bennet playing unreleased video games with a variety of creatures. I love the idea of a crooner sometimes slipping into another dimension to chill. 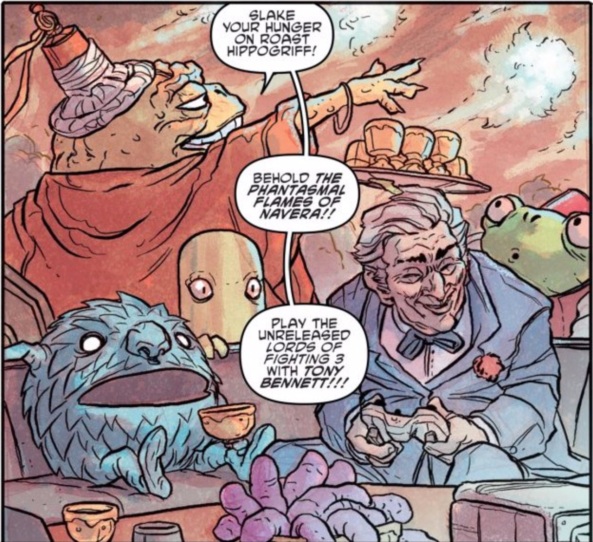 The joke is set up by having the Toad Baron list a smattering of alien delicacies before name dropping Bennett with little context. The image itself is delightful. The round furball with his drink balanced on his knee, leaning back against his seat has the air of a fan on football Sunday with the physicality of a Pixar character. The alien peeking from behind the couch is enchanted. It’s the kind of random tableau you may come across at an Earthbound party. Of course, just because other people are having a good time doesn’t mean you have to stay.

The issue gets almost moralistic as Angel tells Toad Baron that “there’s nothing worse than a host who doesn’t want the party to end” and she’s right, forced fun is an oxymoron. Toad Baron doesn’t understand that. He sees their desire to leave as an affront. His need to control through pleasure is why he will always have guests but never friends.