Michael: It’s a unique experience to watch a set of creators leave their mark on an established character in real time. Though Benjamin Percy works with a handful of different Rebirth artists, none compares to the chapters that are drawn by Juan E. Ferreyra. Under their direction Green Arrow is returning to the socialist hero of yore in a unique Rebirth fashion.

Green Arrow 24 serves as a culmination for a lot of plot points in Percy’s run: Green Arrow vs. The Ninth Circle and Cyrus Brodderick, the public return of the “deceased” Oliver Queen as well as the finale of “The Rise of Star City.” With the destruction of the Space Needle, The Ninth Circle has brought Seattle to its knees. And like any good politician, Ninth Circle stooge Mayor Nick Domini has decided to take advantage of the situation by playing on people’s fears and launching a new political initiative: Star City.

The actual specifics of the Star City plan are still anyone’s guess, but even your casual Arrow viewer will recognize “Star City” as the traditional hometown of Green Arrow. In addition to reintroducing Black Canary to Green Arrow’s world, the potential return of Star City is in line with the Rebirth philosophy. Curiously, the Star City that Percy has introduced is built on the dark lore of The Ninth Circle.

While I’m happy we’re getting Star City back, it’s in the face of something evil. This might be a bit of a leap, but Percy could be potentially commenting on the dangers of yearning for “the good ‘ol days,” especially when those were someone else’s “very bad days.”

Juan E. Ferreyra is a frickin’ dynamo, you guys. He packs an insane amount of visual storytelling into a single page, with all kinds of different layouts and spreads that never get stale. One example of such a stunning visual comes on the second and third pages of the book. Oliver is realizing he doesn’t know his city as well has he thought and sees the “stars” in everything, emphasized by the panels and gutters that intersect to make that huge center star with a puzzled-looking Ollie. 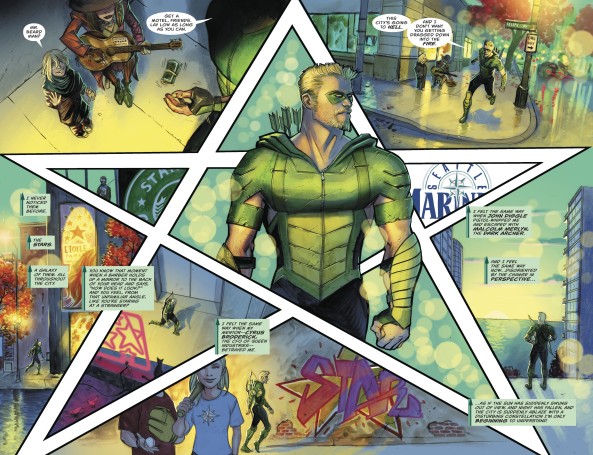 The next page as another spread with one of Ferreyra’s other talents: veritable “Where’s Waldo” maps of detailed panels. Here Ferreyra draws tiny Green Arrow’s sneaky sewer infiltration as if it’s a side-scroller video game. As the normal lives of pedestrians and drivers go on above, Oliver does all kinds of gymnastics to evade detection.

My personal favorite detail? Look to that building on the very left of the panel. There you’ll see the floor plan of two stories of an apartment: bedroom and living room. Right underneath that living room however is a basement with someone chained to a wall. This is not a part of The Ninth Circle sewer tunnel, there’s a clear division between that basement and the tunnels below. Just some person chained to a wall…move along.

DC has its fair share of billionaires — Lex Luthor, Bruce Wayne, Ted Kord. Oliver Queen is probably the least calculating of these billionaires. Oliver is not the master strategist that Bruce Wayne is, nor is he the titan of industry that Luthor is. Being the bleeding heart that he is, Oliver typically acts on his gut — thinking with his heart and not his head.

This is what gets him in trouble at the end of Green Arrow 24. After his subterranean fight with Broderick and co. Oliver is emotionally fried. He’s tired of the bad guys getting away with literal murder and his city getting screwed over because of it. Thus he makes the boneheaded move of blindly announcing he’s alive to the public before promptly getting arrested for suspicion of murder. 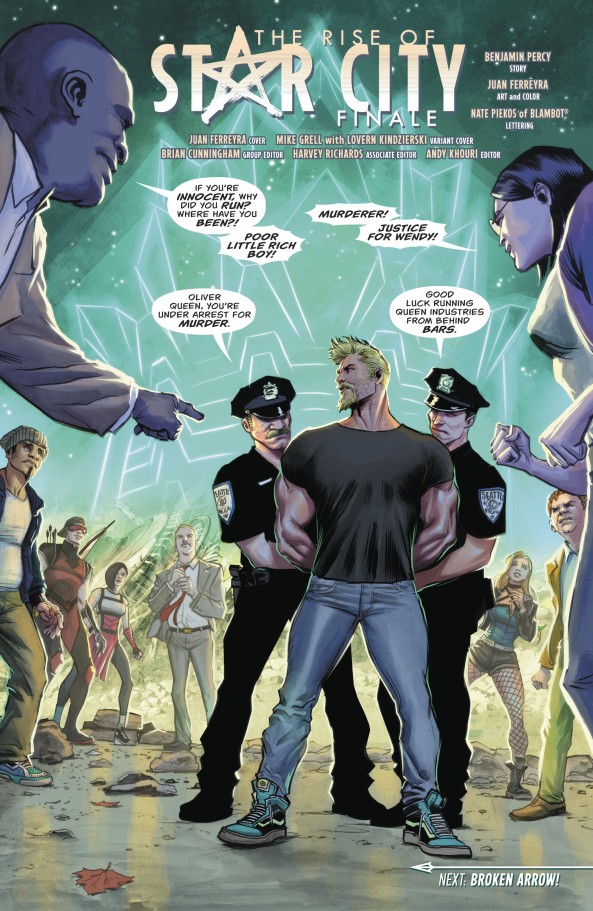 My takeaway here — which is often a Green Arrow takeaway — is that Oliver Queen can’t do this on his own, he needs his friends. It was a joy to see Emi, Roy and Dinah working in tandem against Danny Brick and Cheshire — Dinah even made a brick pun to boot! There’s a fun chemistry between former sidekick Roy and current sidekick Emi, a reluctant brother/sister dynamic. Though it should be said that I’m always happy to see Roy around, and was equally thrilled to see Percy hint to a romantic past between Roy and Cheshire. Might there be a baby Lian out there somewhere??

Spencer! How did Green Arrow 24 treat you? With Broderick (seemingly) dead, does this seem like the end of one era and a beginning of another? Any thoughts on the Star City connection and its dark connotations? Broderick gave Oliver one last chance to join up with the bad guys — don’t you think this kind of Darth Vader “Join me” offer is sort of played out?

Spencer: I suppose it is, Michael — this is the second time I’ve seen the concept used in a DC comic this week alone (the other being Superman). At least in this case there was never any real chance of Oliver giving in or even being tempted; our boy’s not much of a joiner in the first place (remember the Outsiders?), but he’s certainly not going to join up with the Ninth Circle of all people. Broderick’d have to be crazy to think Ollie would, but maybe that’s the point; he’s so caught up in grand tradition that he’s blind to reality. 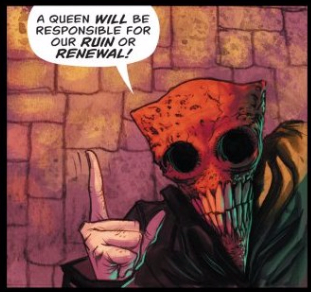 Most obvious is the strange origin myth of the Ninth Circle — spouting prophecies in full Ninth Circle garb, Broderick’s become no different than your typical Batman villain — but those kind of fantasies tie in rather depressingly to some real life fairy tales. Broderick and his cronies are big believers in the lie that having money inherently makes one better than someone without money. 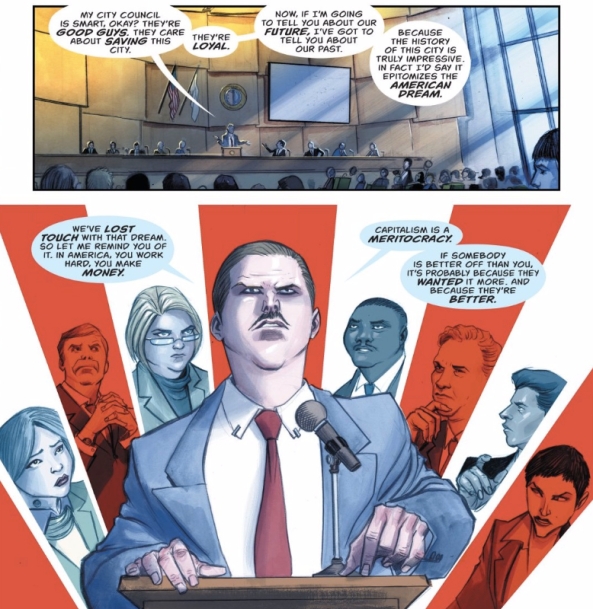 Mayor Domini, one of Broderick’s “Four Horsemen,” states this straight-up in a speech that more than channels Trump (“Smart, okay?” “Good guys” “Loyal”). Never mind that most of America’s richest citizens inherited their wealth and have never done an ounce “hard work” in their life; never mind that America’s poorest break their back doing difficult, exhausting work for next to nothing, caught in a system designed to keep them poor; never mind that tying someone’s intrinsic worth to their wealth is dehumanizing to ridiculous degrees. Those with power and money, those like Broderick and Domini, need to convince the public that their wealth makes them better because it keeps them in power.

And power is really what this is all about. Michael mentioned not knowing the specifics of the Star City plan, but the broad strokes seem pretty clear to me: using the “Four Horsemen” to bring Seattle to its knees creates a scenario where the Ninth Circle-backed Queen Industries can swoop in and “invest” in a new, “Star” City ran by a corporation rather than a government or actual people. It’s highly doubtful the Ninth Circle has any good plans for the city they now rule — Broderick wasted no time pushing Fyff to make weapons for him, making it rather obvious that their only goal is amassing even more wealth, to the detriment of every citizen in the city. What’s chilling is that this is the first step towards the dystopia depicted in Greg Rucka and Michael Lark’s excellent Lazarus — Seattle’s about a day away from a twisted, Republican Mad Max kind of scenario.

The Ninth Circle’s prophesy — or at least the backstory of the Queen Family supporting it — seems to have gotten to Ollie too. The past year of Green Arrow stories has had an “Oliver Queen vs. Green Arrow” undercurrent to it anyway, with Oliver trying to figure out which of his identities is better suited to protect Seattle. He’d fully embraced a life as Green Arrow after seeing how little real change Oliver Queen’s money was making, but the fact that his family has been secretly funding the Ninth Circle since Seattle’s inception now seems to have him thinking that only Oliver Queen can truly save the city.

Honestly, besides the fact that it immediately got him arrested, it’s not a horrible plan. Queen Industries now controls the city; with Broderick dead, it would be easy enough to regain control of the company and put right what the Ninth Circle made wrong. Of course, this could just as easily create opportunities for Ollie to abuse his power, even if unintentionally — there’s also the fact that Ollie only has this opportunity because Green Arrow and his crew took down Broderick, Fyers, Cheshire, and Brick in the first place. It’s looking like the Green Arrow or Oliver Queen conundrum may be even more prominent in Percy’s second year than his first, but I’m guessing the true answer is that Seattle/Star City needs both men.

Michael’s right to praise Juan Ferreyra so effusively. He somehow seems to top himself with each subsequent issue of Green Arrow, and while Michael’s already unpacked a lot of his juiciest moments this week, I just wanted to point out how much I like Ferreyra’s use of spreads. 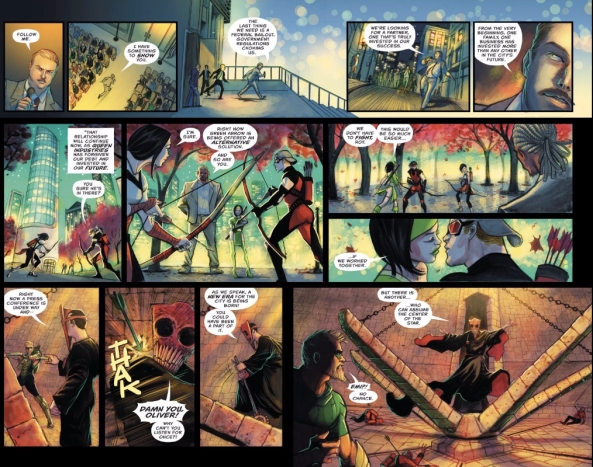 A good 75% to 80% of this issue is framed as a spread — with the artwork sprawling across two full pages at a time — to the point where my print copy had to push almost all of its ads to the very back. This format gives Ferreyra the space to do some tremendous things. In the Arrow vs. Broderick scene it provides plenty of horizontal space, allowing the two men to face off from across the room and still have plenty of empty space between them, while in the above spread it allows Ferreyra to evenly split the spread between three different stories, giving each story its own tier. Again, with so much space, even three stories sharing the same real estate don’t feel cramped at all, and Ferreyra gives each scene a distinct color palette so that they’re immediately distinct from each other.

Also, despite a bi-weekly schedule, Ferreyra illustrated every single installment of the “Rise of Star City” storyline. That alone is worth praising.

With a full year now under his belt, I just wanted to take a moment to praise Percy’s Rebirth depiction of Oliver Queen in general. In many way he’s a human trainwreck, as flawed as they come, but his heart is always in the right place, and seeing a hero trying to use his money and privilege to better the world, a hero who shoots arrows into psychopathic millionaires in the same issue that he feeds and protects the homeless, is exactly what I need right now. In our current political landscape, I daresay that Green Arrow is as important and inspirational a figure as Superman himself. I’m so grateful that Percy, Ferreyra, and their other artistic collaborators have returned Green Arrow to his roots without sacrificing an ounce of the flair, thrills, and sheer storytelling prowess that make comic books such an exciting and engaging medium.