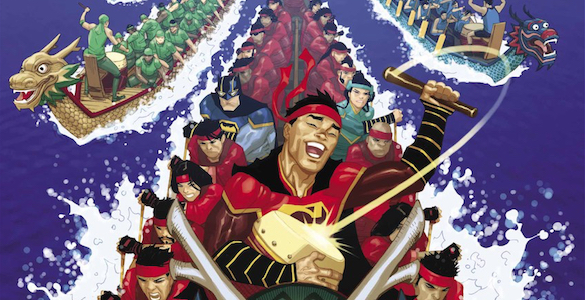 I’m a big theme park nerd, so the 2010 announcement of Shanghai Disneyland was big news. For anyone who followed the development and construction of Disney’s first resort in mainland China, the guiding design principle you heard over and over from those involved in the project was “authentically Disney and distinctly Chinese” — melding the spirit of Chinese culture with the best of Disney. New Super-Man was launched by Gene Luen Yang 12 issues ago with a similar promise, to pair the best elements of superhero stories with Chinese folklore to create something entirely new. New Super-Man 12 is the first issue to really deliver the full potential of that promise. 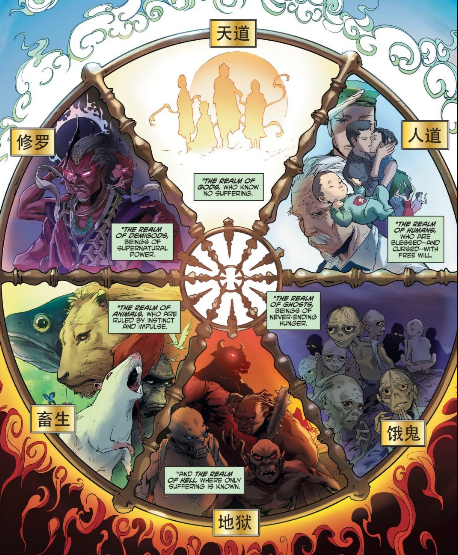 New Super-Man 12 opens with the six realms of Buddhist cosmology: Gods, Demigods, Human, Animal, Ghost, and Hell. It’s explained that the proper way to pass from one realm to another is through death and the process of reincarnation, but that sometimes creatures will try to find another way. It’s not for more than 15 pages that we understand the context for this information, when it’s revealed that Wonder-Woman is actually Green Snake from Legend of the White Snake, having passed from the animal to the human realm by cultivating her Qi. It’s a lovely reveal that makes perfect sense in hindsight; Princess Diana of Themyscira is a Demigod, so of course Peng Deilan would have mythological origins as well. There have always been nods to Chinese culture in the past, like the idea that Qi is responsible for super powers, but this is the first time that it’s really been utilized in a way that’s integral to the story. 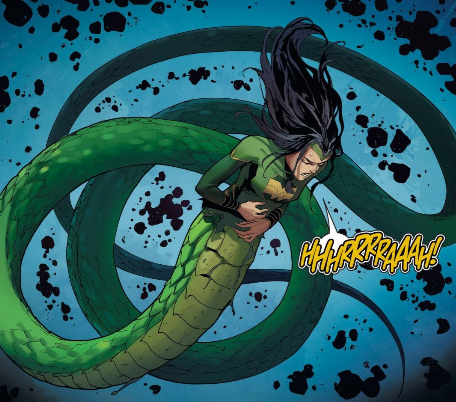 The other big reveal of the issue is that Dr. Omen is Kenan’s mother. I am genuinely shocked, even though (thanks in part to Roger Ebert’s Law of Economy of Characters) I should have seen it coming. The urgency of this cliffhanger, Omen falls out of the Shanghai Pearl with only Kenan to save her, gives next issue stakes that can’t be deflatingly hand-waved away, like Yang’s quick introduction/quick dismissal of Ching Lung.

New Super-Man has always excelled in its smaller characters moments, without ever really gaining a ton of forward momentum. For a book with a somewhat confusing pace, having two big revelations this issue goes a long way towards potentially kicking things into gear.