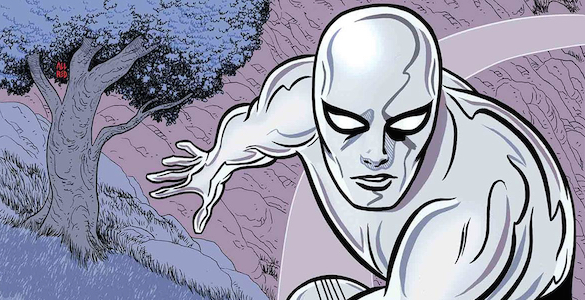 Drew: To say that Dan Slott, Michael Allred, and Laura Allred delight in the formal aspects of comics would be a profound understatement. The most indicative example must be issue 11 of the previous volume, which featured a kind of Möbius strip that readers had to consciously break out of. It’s the kind of innovation that might feel gimmicky to the passerby, but on closer inspection is so closely tied to the content of the story, it’s almost impossible to imagine it being handled any other way. In that case, Norrin and Dawn were stuck in a time loop, so the closed loop of the layout was essential to making that point literal. This issue finds Dawn stuck in time in a very different way, and the creative team manages to find a different technique to capture her stasis.

Take a look at the opening panels of the first two scenes in the issue: 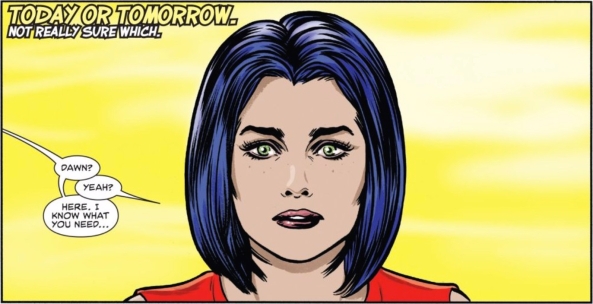 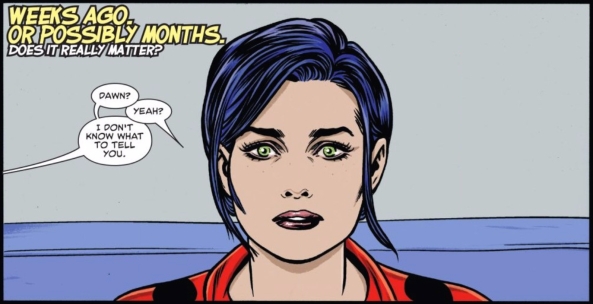 It’s hard to recreate the effect this has in the issue itself, since we can’t see these panels at the same time, but turning from the opening spread to the second effectively replaces one of these with the other, emphasizing that Dawn’s expression hasn’t changed, even as the world has changed around her. It’s a remarkably subtle cue, but one the rest of the issue seems built around, so I’m going to dwell on it a bit.

While Michael Allred draws the expression more or less identically, he does everything he can to show that a great deal of time has passed between these two images. Dawn’s hair, clothing, and setting have all changed, (Laura Allred even lights the scenes differently, even as she keeps the colors largely the same), making it clear that this is not the same scene, which in turn draws our attention back to Dawn’s unchanging expression. Slott gooses this in the text, orienting us with Dawn’s apparent indifference to when any of this is happening, and capping it off with her “Yeah?” when her name is called in both scenes. There’s no way to miss that she’s detached from what’s going on around her.

All of which reiterates that “frozen in time” feeling. That stems from her grief, and while we see her stuck in it in the opening scene, it’s not until we flash back to her first hearing the news about her father that we understand that she has been in this state for weeks (or possibly months). This sets up the structure for the first half of the issue, which alternates scenes between the earliest stages of Dawn’s grief on Earth, and her stalled progress on Euphoria. By the time the flashbacks catch up to the present, we understand exactly how static Dawn’s emotions have been this whole time.

Indeed, when the issue finally identifies a time as “now,” it’s when Dawn is waking up from a nightmare, perhaps suggesting that the first half of this issue was her nightmare — not that it didn’t happen, just that she’s now identifying just how stuck she’s been. I think this theory also explains those subjective time captions, but I hate to fixate on that detail. Either way, it’s only when she wakes up from that nightmare that Dawn is finally able to move on, confronting her grief as Norrin literally silences the comforting nostalgia offered by Euphoria. 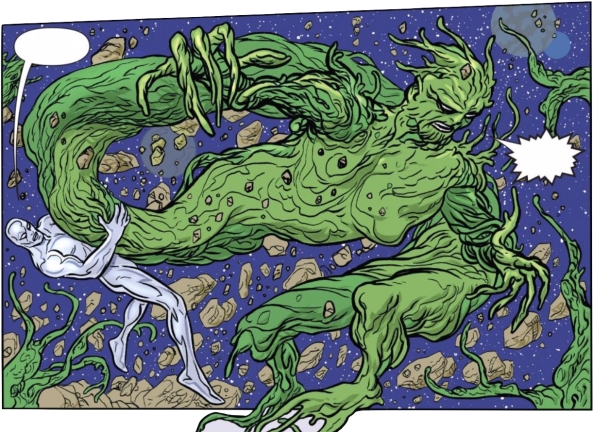 When she comes out the other side, Dawn identifies the sacrifices Norrin made to stay with her on Euphoria. Moreover, she seems to recognize that their connection was strengthened by her vulnerability, so she encourages Norrin to “silver down” for their next journey, leaving them on similar footing as they head off into the unknown together.

Patrick! I really loved this issue — it’s an entirely non-preachy meditation on grief that doubles as an important journey for these two characters. But I realize I completely failed to mention Norrin’s little arc about vulnerability and “hanging back” when emotions get hot. I think there’s a lot to explore there, though I wonder if this issue dug into it enough. What’d you think?

Patrick: The interesting thing about Norrin’s story is that, while he does silver down by the end, he is emotionally guarded throughout the entire issue. Even when Dawn makes her breakthrough, Surfer isn’t helping by getting in the muck and experiencing the hurt and confusion with her, but by bodyslamming the personification of nostalgia. He’s doing superhero shit in dorky sci-fi fashion, right down to the explanation for how he’s able to silence Euphoria: he stops the vibration of nearby atoms. Slott and the Allreds stage this fight on the same pages Dawn comes to her own hard emotional truths about love and loss, really highlighting the disparity between what’s happening for Dawn and what’s happening for Norrin. The conclusions arrive right on top of each other, but the action on the page is about as different as you could imagine. 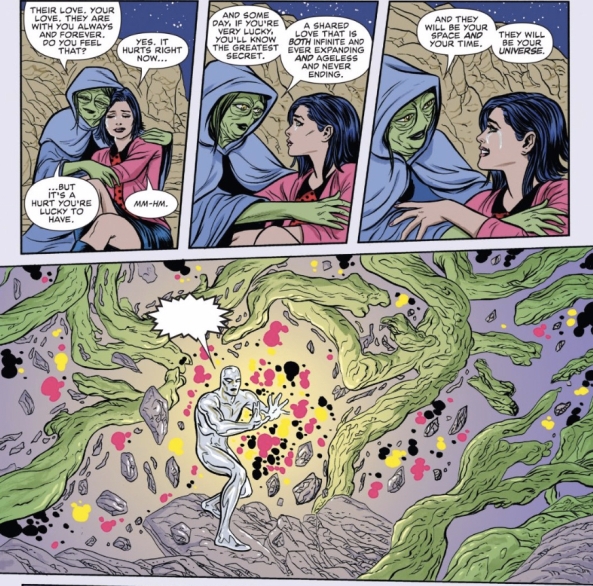 Dawn’s scene with Mama Hub is slow and measured — three pages in a row give us this band of three panels, each with a two-shot of Mama and Dawn. These two characters talk to each other, and Slott uses the opportunity to write some of the more beautiful sentiment I’ve ever seen flowing from his pen. By comparison, Norrin’s blast-em-up is literally wordless, and the existence of those empty shout balloons only calls out that difference. Also, check it: Dawn’s panels rigidly obey the gutters of the page, but all of Surfer’s panels either have stray elements that extend beyond the panel borders or (in the case of this last panel) the panel itself extends all the way through the left and right gutters.

And actually, as long as I’m on the subject, let’s stay with the topic of the gutters, shall we? Laura Allred sets the scenes on Earth against a black page, leaving the gutters themselves black — sad and heavy. By comparison, the Euphoria scenes are all against a white page. This is absolute, by the way, there are no exceptions to this rule. Something interesting happens when Norrin takes Dawn off the planet that is home to her grief and into space: the darkness of the gutter gives way to light. 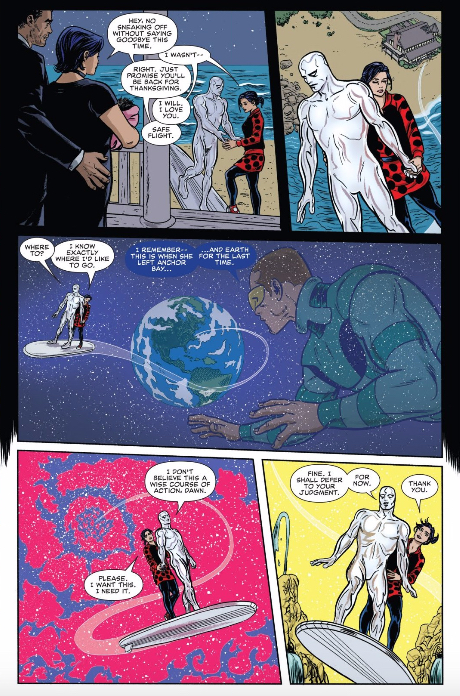 I’m still working out what’s going on in that third panel. I’m afraid I’m not savvy enough to recognize that character’s design or the dark blue speech balloons, but it’s clear that this moment is meant to be strongly suggestive of… something. Notice how the figure — in his only speech in the issue — seems to be implying that Dawn never returns to Earth. In effect, Slott is setting us up for some other person processing their own loss of Dawn, revisiting a memory as we’re experiencing it in real time. That, of course, folds in to the moral at the end of the issue — both love and grief are unending processes, and one person’s “because” is another person’s “why.”