by Ryan Mogge and Ryan Desaulniers

Ryan M.: How much background do you need to enjoy a single issue of an on-going serial? There is an argument that the answer is none. Most of us start out by just diving in, checking things out and then heading to Wikipedia or a very knowledgeable friend to help fill in the cracks. The serialized narrative is a moving train, you catch it when you can, and see what it has to offer. This can be one of the format’s strengths, giving the reader a feeling of discovery by entering a rich established world. You may have questions that aren’t answered or relationship dynamics you can’t understand, but you are seeing into a fictional world that is fully realized. It’s one of the reasons that origin stories can feel plodding. They are explaining why things are rather than showing what they become. In Peter Parker: The Spectacular Spider Man 1, Chip Zdarsky balances out that sense of history by giving the story a day-in-the-life feel with a few big turns that make it clear that a bigger story is evolving.

Peter stumbles onto this bigger story when he finds a hacked Stark phone in the wake of a bank robbery. In addition to stopping the bank robbery, he gets a cute girl’s number, meets the Tinkerer’s non-evil brother, and stands up Johnny Storm. The phone leads him to Chicago and Ironheart’s blaster. Also, Peter’s probably non-evil sister returns to town for reasons unknown.

While the issue is mostly successful as a jumping on point for new readers, Zdarsky’s Peter Parker cannot help but reference the past. The book opens with a retelling of Spider-Man’s origin. Calling this well-trod territory is quite an understatement, and Zdarsky gets to both tell the story and undercut it by having Johnny Storm speak for the masses with origin-fatigue. We know the story. We know about how with great power, well, y’know. Peter makes sure to finish the quote, just in case.

Adam Kubert seems to acknowledge the inherent limitations at this story being retold. The palette is limited, the panels nigh claustrophic. The black gutters give a sense of encroachment around the panels which contain images that seemed cropped a little too much. The vintage style of the art also gives the entire page a staid quality. Increasing that sense is that Peter’s version of the events completely side-steps the part that makes this story “Spectacular” until the last panel when he remembers to mention that the spider bite gave him powers.

The sequence gives way to a beautiful aerial view of Manhattan and Peter having a Skyscraper-ledge lunch with Johnny Storm. The relatively boring warm up makes this expansive view all the more engaging. We get a lot of what is “fun” about being a Spider-Man in this issue. He hangs out and banters with a superhero buddy, flies through the air, and foils a bank robbery. He even manages to get a cute girl’s number while wearing the suit. Zdarsky makes even the awkward moments of Peter’s day feel charming. 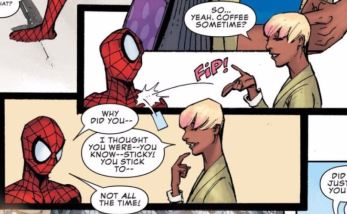 Zdarsky and Kubert create a status quo that doesn’t feel like mere preamble. Of course, when that status quo is threatened, it’s all the more intriguing.

Zdarsky throws three curve balls at our boy Peter. First, we have the most traditional surprise in the confrontation between Spider-Man and Ironheart. We don’t know why Riri is in a shoot first, ask questions next issue mood, but ending that thread with a surprise cameo is well-trod genre territory. It retroactively makes sense that the hacked Stark phones would be of interest to the girl who has taken on the suit. Also, Zdarsky has created a world where superheroes are constantly interacting and running into each other, so there is a narrative consistency in having that be a the final beat of the main story line. It’s nearly cliche to end an issue with a surprise attack, complete with the attacker’s figure looming over our hero in a moment of surprise

Again, Zdarsky deliberately breaks that convention by inserting one more page to the main story. Theresa is outside Peter’s building. It’s the kind of surprise designed to get the reader to keep reading, but it also promises a meaningful shake-up to the world.

Ryan, what did you think? Is there enough here to simultaneously attract new readers and get them committed? Also, is there a certain eight hours that is long enough before contacting a potential date? Like, how about 11:30am-7:30pm?

Ryan D: While I, unlike some impatient Millennials who can’t make it eight hours, try to subscribe to the twenty-four hour rule with texting or calling before making a date happen, I think we must heed Chip’s advice here; after all, he contributes to the always-pertinent and never-embellished sex tips in the SexCrims letters’ section. Peter, it seems, is hopeless and probably doesn’t even know what “brimping” is. That being said, I thought this issue played with the “editor’s note” caption box gag — the tactic used to tease Peter’s dating incompetency here — very well without overdoing the gimmick, which I appreciate all the more when considering how Chip leaned in a bit too hard on certain schticks for my taste in at least one series he wrote.

I think this issue 1 catches up readers who may be more familiar with the MCU’s Spidey extremely well, personally. Peter isn’t hanging out in high school and qualifies himself as “young(ish)”, for one. Two, the issue establishes Peter’s prowess with technology several times to allude to his day job. Three, we catch up on the death of J. Jonah Jameson’s father while Peter catches up with Aunt May, which also serves to contextualize the setting in a modern day very similar to our world as May urges Peter to try an online dating app. The issue even does a great job to set up the swerve at the end of the issue of the appearance of Peter’s sister when Peter says: 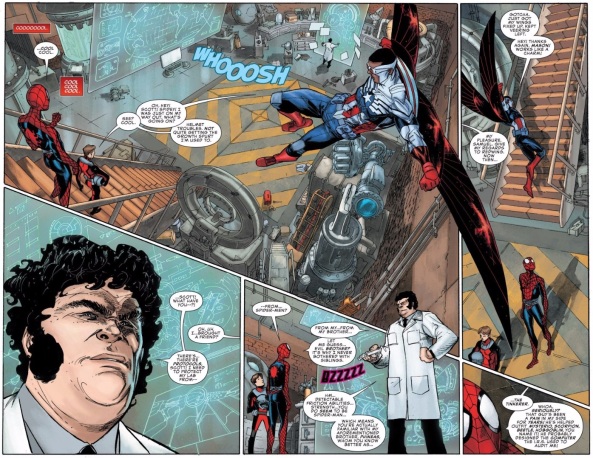 I first took this as an off-the-cuff quip, but it actually serves a deeper purpose of solidifying the status-quo for anyone who might be new to the series or just still confused by the Clone Saga that Peter Parker has been, until now it seems, an only child.

I’d also like to point out Kubert did a phenomenal job with that page which showcases his effective use of size in this issue. There are three heroes in the opening establishing shot, but the real focus falls on how technologically advanced the lab is, and it’s breadth, and the line of movement from the stairwell down leads to the line in the floor on to the maestro of the operation, Hophni Mason. While Sam Wilson’s wing pulls the eye into the second panel, the length of the stairwell takes up the most space in the panel; pair that with Spidey’s neck craning up and to the rest of the room, and Kubert’s sold us on the fact that this place is huge and probably significant. The trend continues as we meet Mason, who already looms large with a low-angle shot of his large, Andre the Giant-esque head before we see his height, which towers above Spider-Man to the point that the enormous engineer can’t even fit in the panel. Lastly, Kubert stuffs Spidey into a small corner panel, cutting off half of the Web Head and viewing him from high-angle shot, reducing Spider-Man’s stature. This plays perfectly into the insecurity Peter’s been feeling since his web-shooter malfunctioned, Ant-Man not respecting his intelligence, not to mention the lack of confidence felt regarding his potential date with the stand-up comic. Really solid work which doesn’t beat you over the head with the fact that it’s serving a purpose.

Actually, that’s a good way to sum up this issue: strong writing and art which does not need to try too hard to impress us or get in the way of the story. While the story might not be anything that complicated or mind-blowing yet, its simplicity should act as a draw for any newcomers trying to find a way in to the universe, while also promising bigger things on the horizon from Riri’s involvement, Teresa the sister turning up, and a strong love interest being introduced. If you’re a fan of Spider-Man or Adam Kubert’s pencils or Chip Zdarsky’s insane attention to comedic detail (Rebecca London’s business card e-mail is for “londonjokes@starkmail.com”), then you should check this issue out. If you’re a fan of all three, then after consuming this number 1, you may be waiting for the next issue wait baited breath like this: 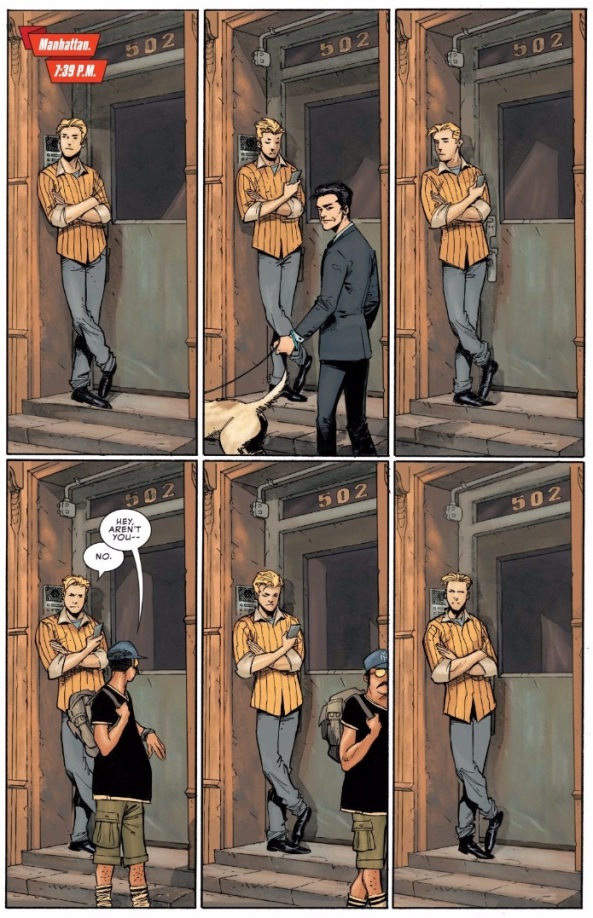