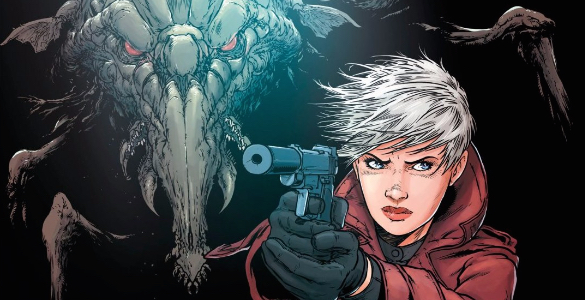 In a world as complicated as this one, replete with conspiracies between corporations, technology theft, aliens living among us puny humans, and a gigantic cast of characters, it helps to find ways to keep things simple. In The Wild Storm 5, writer Warren Ellis and artist Jon Davis-Hunt introduce many new, somewhat confusing elements to the narrative, but underscore these revelations with a firm grounding in characters’ wants and needs.

As an actor, the first thing you might do when you get a scene in your hands is ask, “what do my characters want or need?” As the curtains rise in the issue on a conversation between Mike Cray, an agent of IO, and his boss Miles Craven, Ellis immediately gives us their wants, straight in the form of their dialogue. Craven wants Mike to kill Angela Spica because he needs Spica’s piece off the game board. Mike wants/needs to live despite his terminal brain tumor. This helps the audience through the remaining scenes these two share, as there is no ambiguity as to why the two characters are in conflict from the get-go.

The wants/needs dynamic becomes a bit more convoluted when Zealot goes to check on the location where the recent shootout between IO and the Wild C.A.T. transpired and runs into an alien Daemon.

While it’s been alluded to and explicitly stated that there are aliens living on this Earth, we finally get a taste of some of the particular given circumstances going into this particular scene, mainly that whatever race to which Zealot belongs has nearly always been in conflict with the Daemonites. Fans of the original series will know what’s going on here, but a casual reader might be left with questions during this dialogue if they’d forgotten information shared about Zealot in scene 1, issue 1 of this series. While this encounter may be a bit ambiguous at the moment, it helps deepen the given circumstances of the world and will surely play a larger role in the near-future.

Perhaps the best balance this issue comes from the sit-down conversation between Spica and Adrianna, wherein we get Adrianna’s backstory, amazing world building as The Bleed is finally (somewhat) explained, all with nice wants from the two women. Angela Spica wants answers while Adrianna wants to convince the Engineer that Marlowe and his wild C.A.T. deserve trust. While “to convince” might not seem like a strong action to play, the stakes are high enough on this conversation as we know that many other less-understanding parties are searching for Spica, and also that Adrianna may be developing a kinship with another woman whose life changed irrevocably due to encounters with advanced technology.

While I could write another paragraph alone on Michael Cray’s “life flashing before his eyes”  section — which I really dug — or the cliffhanger featuring Christine Trelane (considering her interesting power set in the original WildStorm universe) in his apartment while IO knocks, for now I’ll just say that every issue thus far has either answered many questions through a slow reveal, or added several more, or both. Fortunately, I am finding myself very patient with this cycle as we approach the sixth issue watermark, thanks mostly to the hard work being put in by Ellis and Davis-Hunt who are both at the top of their craft, neither of whom sacrifice the wants and needs of these characters in favor of dumping exposition. Now, if I could only figure out how the hell Voodoo fits into this whole thing…