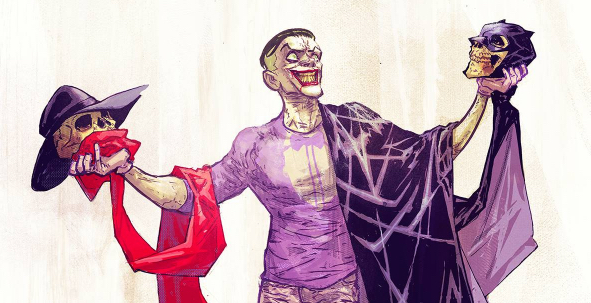 “Forget everything you think you know” is a phrase that has become overused in pop culture — particularly in marketing movies like last year’s Doctor Strange. Nevertheless, I couldn’t help but think about it while reading Batman/The Shadow 3. Steve Orlando and Scott Snyder challenge our presumptions on Batman’s origins by positing that he is destined to inherit the mantle of The Shadow.

I imagine that many a Bat-fan would cry foul if this type of foundational twist were introduced in the main Batman title. However, since it takes place in the almost Elseworlds-tale of Batman/The Shadow, I’m at least more inclined to accept it. In a story where The Joker teams up with a creepy ritual killer and The Shadow unloads some mythical exposition on Alfred, I found myself interested in its treatment of Batman.

Whether or not he’d like to admit it, it’s clear that Batman has found himself in the midst of the supernatural. And while The Shadow and The Stag are seemingly immortal, Riley Rossmo treats Batman as if he’s his own creature of myth.

Batman’s presence is felt as Clem Robins’ disembodied dialogue captions instruct the imprisoned Shadow, but we don’t actually see The Dark Knight until ¾ of the way through the book. Batman is a characteristically sneaky type, but his unseen nature here only strengthens the idea that he might someday become the inexplicable Shadow.

The Joker of Batman/The Shadow 3 is somewhat reminiscent of Grant Morrison’s “David Bowie Joker” from Batman RIP: he’s a performance artist that just wants Batman to understand his message.

I’m anticipating him betraying The Stag very soon because Joker doesn’t follow along with someone else’s plan traditionally. We get a glimpse of that here when he fusses over Batman stating The Stag’s name before his own.