Patrick: Thwip! Bamf! Snikt! You know those sound effects: respectively, they mean a) Spider-Man shooting some web fluid, b) Nightcrawler teleporting away, and c) Wolverine deploying his claws. It is perhaps illustrative of the predictability of their superpowers that there are immutable sound effects that accompany them. You know exactly what it sounds like when Wolvie pops his claws, but you also know exactly what he can do with them. These powers are used in unsurprising ways to save the day, but what happens when the superheroes have powers that aren’t so easy to understand? Well, then you’ve got the residents of The Willow and the cast of Secret Weapons.

The premise for Secret Weapons is simple: a group of superhero rejects struggle to find their place in a world that doesn’t value their super powers. In the Valiant universe, these characters are called Psiots, but they’re basically Mutants or Inhumans from the Marvel Universe, or Metahumans from the DC Universe. They have latent powers that require some scientific method to unlock them, but are otherwise human. The first of these Psiots that we meet is named Nicole Finch, and her power is Ornipathy, or the ability to speak to birds. Right out the gate, writer Eric Heisserer is playing with some of the more hilarious superhero tropes, right down to giving the hero a name with a groaningly obvious pun. “Finch.” Nicole’s power is also immediately evocative of everyone’s favorite superhero punching-bag, Aquaman, who is oft-derided for his ability to speak to fish. DC’s writers may have tried to back down on the goofiness of that power, taking pains to specify that he commands fish, but Heisserer doesn’t give a fuck: Nicole talks to birds. Like, she literally carries on a conversation with a pigeon. 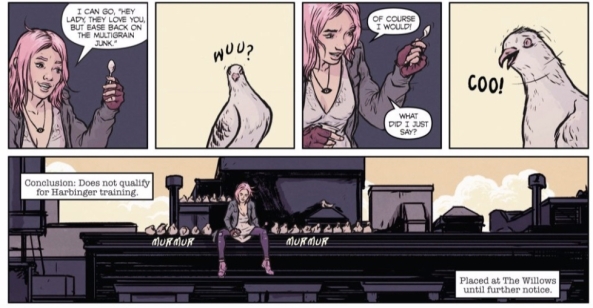 Check out how dismissive those narration boxes are. It’s never made 100% clear whose dossiers we’re reading here, which lends these observations about her a little more authority. The reader can’t ascribe a specific agenda or perspective to “Does not qualify for Harbinger training,” so we sorta have to take the statement at face value. Nicole’s powers — which, remember, are talking to birds — are not worth our time or interest.

But that’s where the series’ villain, and the creative team, disagree with you. We don’t know much about this power-vampire — the closest thing we get to a name is Rex-0. (Also, to add some additional ambiguity, I’m not sure if that’s Rex-Zero or Rex-Oh… I’m going to use the number from here on.) All we really know is that Rex-0 has been sent out to harvest “champions” to collect their powers from them. Our omniscient narrator may have passed on Nicole, but our boy Rex sees the value. We actually start the issue with Rex-0 and his evil scientist overlord, which sets up this idea that Rex is going to be targeting “fallen champions” to “get closer to […] gods.”

Okay, so which is it? Are Nicole’s powers worth of ridicule or worthy of envy? Brother, you best believe it’s the latter. Nicole overwhelms her opponents with flows of birds, she uses the updraft provided by their flight patterns to aid her jumps, she sleeps under the watchful eye of a pigeon coop. The artist team of Raúl Allén and Patricia Martín relishes every panel of her bird-summoning acrobatics.

Allén and Martín slow time in that second row of panels while flipping back at forth between perspectives, simultaneously slowing down and speeding up the action. The result is that Nicole, who is homeless and who’s powers are laughable, is a badass, commanding the page in blockbuster fashion.

I’d argue that Heisserer, Allén and Martín extend this reverence to everyone’s superpowers. Even Valiant mainstays like Livewire have unique and innovative expressions of their abilities. There’s a sequence where she leads Owen Cho — an inconvenient-object-summoner — through the streets of Oklahoma City by selectively activating streetlights and traffic signals. These characters are finding non-obvious solutions to their problems, and we can see that same spirit of intention applied to Allén and Martín and how they solve storytelling problems.

Finch and Cho spend a night together in a pigeon coop. This isn’t a romantic evening, or anything like that, but the characters do share a moment of intimacy. Allén and Martín give us the night and the morning at the same time.

This is my favorite page in the issue. If we’re reading from left to right, every single one of these horizontal panels starts with night and ends with day, but if we’re reading straight down, it’s a singular march toward the morning. Finch and Cho don’t say much to each other, and Martín’s tight speech balloons makes their dialogue look even smaller, but the simple turn toward each other by the page’s end speaks volumes about their relationship. They have a shared history that has put them into another harrowing experience that they will survive together.

Drew, I loved this issue. It seems like there’s a fair amount of Valiant mythology floating around on the periphery (i.e., who is Harada?), but not enough to get in the way of a n00b like me enjoying it. Heisserer’s script is tight as a drum and it’s hard to fathom the sheer number of panels Allén and Martín cram on to every page. I’m so excited to hear what you have to say about this issue that I don’t even want to prompt you with anything specific. Okay, here’s a fun one: how do you think Martin’s power of “makes inanimate objects glow” could possibly pay off?

Drew: It’s definitely difficult to imagine a scenario where that particular skill might come in handy — it seems a bit like Gambit, but without any actual offensive utility — but one of the benefits of Allén and Martín’s documentarian style is that we pick up the rules of his powers without any actual explanation.

It seems he has to be holding the inanimate object in question, and that the glowing stops the second he’s no longer in contact with it. That’s a decidedly limited power. He wouldn’t be able to light your path the way Livewire did in this issue, for example, so it’s difficult to imagine practical applications. Of course, we also don’t know if these are hard limits on his ability — perhaps with training, he can make larger objects glow (a wall? a room? a building?), or glow intensely enough to blind or disorient enemies. The power may seem silly and useless now, but as the Pete Holmes Show made clear, so does basically every X-Man’s power when you really think about it.

I mean, talking to birds is objectively silly, but it doesn’t stop Nicole from being a certified badass in this issue. Ultimately, her most heroic qualities — bravery, loyalty, and sense of duty — have nothing to do with superpowers, but she’s managed to find use for her powers that actually helps achieve her goals. Still, it seems she’s mostly relying on training up her regular human abilities — she mentions “sneaking into the gym” as part of her normal routine — which gives her a decidedly Batman-like feel. Heck, replace her ability to talk to birds with some kind of bird-attracting tech, and her rescue of Martin is remarkably evokative of Batman: Year One.

As much fun as Allén and Martín’s dense paneling is, my favorite moments are when they cram multiple actions into a single panel, most often to capture Nicole’s balletics.

This approach feels almost essential to demonstrating just how skilled Nicole is. We can see exactly how far she leaps with nary a bird in sight — that’s all muscle and training that carries her onto the roof. Again, ornipathy or no, Nicole is a fucking superhero.

Which may hint at some interesting gender stuff bubbling beneath the surface of the series. Obviously, introducing two badass female superheroes while the two superpowered males are more or less useless in a fight is a subversion of sorts, but I think there may be an interesting story on the gender politics that carried the characters to that point. Harada (who I’m pretty sure is the asshole we see in that holographic message, Patrick) told these psiots they were useless, which Nicole took to heart less than the men because she’d heard it all before. As a woman, she was used to defying society’s low expectations of her, so wasn’t going to live down to Harada’s dismissal. Martin and Owen, on the other hand, accepted Harada’s assessment, seeing their powers as useless at best, and a huge inconvenience at worst. Nicole’s gender conferred upon her what Malcolm Gladwell calls “advantageous disadvantages,” setting her up for success that her male counterparts couldn’t imagine.

So yeah, this is a dense issue, full of Valiant mythology and new character introductions, but it flows beautifully, buoyed by clever storytelling decisions by the entire creative team. Character voices rang clear as day, and the action managed to be just as revelatory. This is an exceptional first issue, one that manages not only to excite me about what comes next, but also to inspire curiosity about the universe surrounding it. I’m hooked.