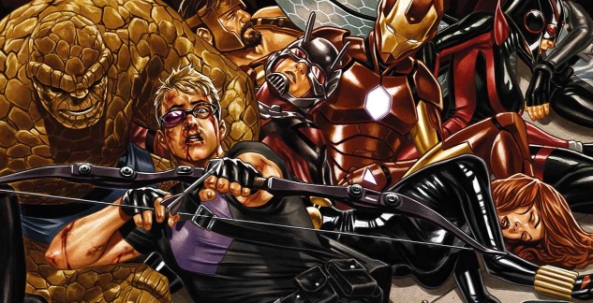 “The power of friendship” is a popular trope in most media. The idea that most situations can be overcome through the bonds we share with our friends is powerful in a lot of ways, but it’s one that never really seems applicable to war or espionage stories like Secret Empire. Make no mistake, Hydra is not going to be defeated by friendship or optimism alone, but in Secret Empire 5, Nick Spencer, Rod Reis, Andrea Sorrentino, Joshua Cassara, and Rachelle Rosenberg do explore the effect pre-existing relationships have on their conflict. It’s not always a good one.

The Reis-illustrated Steve Rogers “fairy tale” segment of the issue addresses this most explicitly, opening on Steve, Sam, and Bucky reunited and strengthened by each others’ friendship. 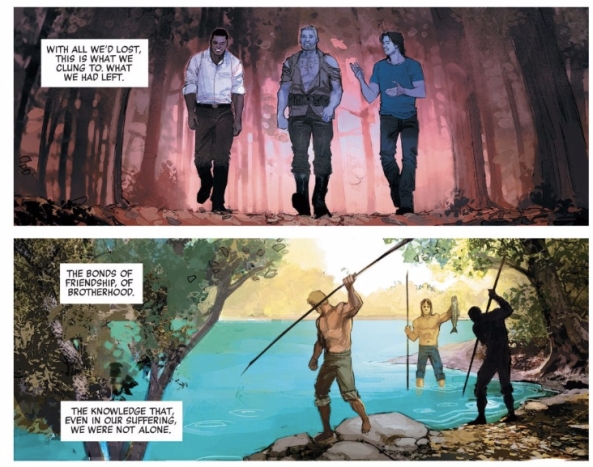 Their peace doesn’t last, as Sam and Bucky are quickly put down by the Red Skull, who presents himself as Steve’s only hope for escape. Sam and Bucky’s companionship was nice, but Red Skull seems to actually know where they are and how to escape — victory here can’t be achieved through friendship, but through teaming up with an old enemy.

Those ideas resonate throughout the rest of the issue. Iron Man’s appeal to Black Panther based on years of friendship fails because, after all the time they’ve spent together (and likely because of Steve’s betrayal as well), T’Challa doesn’t trust Tony anymore. The bonds of friendship have failed them, in the same way they’ve failed the resistance in general via Mockingbird’s apparent betrayal.

Rogers, meanwhile, is gaining ground by taking control of his former enemies. He’s essentially possessed Scarlet Witch and Vision, manipulated Odinson and Deadpool to his side, resurrected Bruce Banner so as to use the Hulk as a weapon. It’s working for the moment, but may not be sustainable: Hulk is notoriously uncontrollable, Odinson’s resolve is wavering, and Vision has broken through his reprogramming more than once.

Really, the only clean victory we see in this issue is Black Widow’s, who is able to convince Madame Hydra to assist her by playing to her greed and fear of Steve Rogers. That may be the takeaway of this issue: the only way to achieve victory in such desperate times is through strategy and negotiation — relying on either friendship or coercion alone is sure to fail.