Drew: Joseph Stalin likely never uttered this phrase, but while its provenance may be dubious, it’s hard to argue with its sentiment. We’ve all experienced this personally; individual deaths carry with them the nuance and beauty of the decedent’s death in a way that dozens of deaths simply can’t. Each of those deaths are felt singularly by the loved ones they affect, to be sure, but the rest of us can’t really fit the sum of those tragedies into our brain. They become, for lack of a better term, a statistic. This is why war stories are so rare in superhero comics — the higher death count doesn’t necessarily equal higher emotional stakes, so killing swaths of civilians runs the risk of making any one of those deaths lose whatever oomph it might have on its own. Writer Tom King seems keenly aware of how easy it would be for the victims of “The War of Jokes and Riddles” to become statistics, taking pains to emphasize just how deeply Batman feels each of those deaths.

And there sure are a lot of deaths. But again, this issue isn’t about statistics, so each of those deaths is accompanied by some heartbreakingly mundane biographical info about the victims. The majority of the victims in this issue are members of Carmine Falcone’s criminal organization, which found itself in the crossfire between Joker and the Riddler, but they’re far from the only ones. Curiously, some of the other deaths can’t be as easily explained. Check out the multiple homicide that opens the issue: 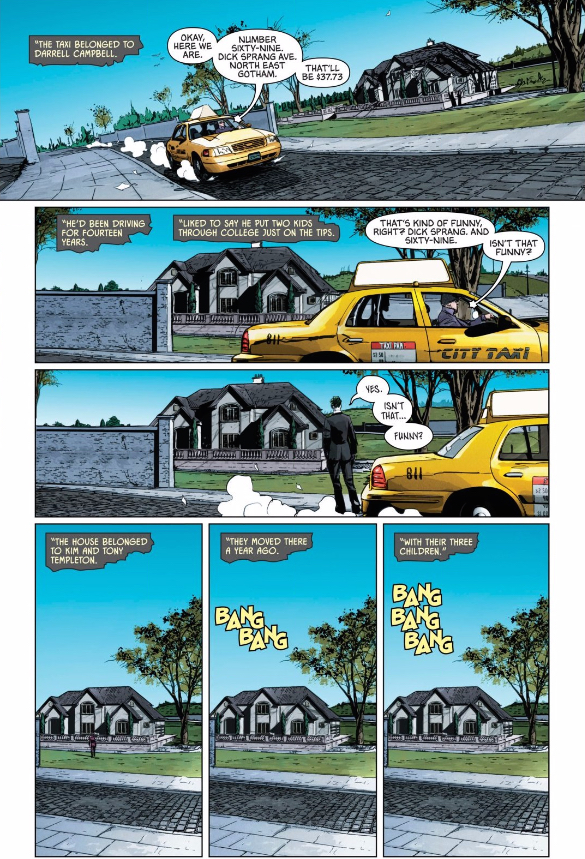 Unlike the cannon fodder of Falcone’s goons, there’s no clear motivation to these murders. Perhaps Joker is hoping to enact some kind of meta attack on Riddler, killing residents of the street named after his creator, Dick Sprang, or perhaps he picked them because he’s still trying to find his sense of humor and, as the taxi driver points out, “Sixty-nine Dick Sprang Ave” is kind of a funny address, but any direct connection to his war with the Riddler is a mystery.

(I’ll admit, that mystery had me digging obsessively for clues, thinking that there might be some valuable nuggets embedded in $37.73, the cab fare, or 811, the number on the taxi, but the closest I can come is that neither are “happy numbers.”)

In any case, there’s a brutal joylessness in Joker’s actions here. He’s utterly disinterested in the observation about the address (however pedestrian the joke may be), and he doesn’t seem to take any pleasure in killing the cab driver, who we learn died hours later from apparent exposure to joker toxin. Even the pacing of the murders — emphasized by Batman’s mentioning of the three kids followed by a rapid-fire “BANG BANG BANG” — feels almost clinical. He’s still a psychopath, but he’s far from the madcap maniac we know so well.

Much of the rest of the issue focuses more closely on Joker’s attempt on Riddler’s life via the Falcone organization (and the subsequent fallout), but I’m most intrigued at the victims whose deaths we never see. Bruce’s guilt over these deaths is made explicit by artist Mikel Janín, who projects the faces of the dead behind him, suggesting that they remain in the back of his mind as he tells this story.

It’s a powerful image (undermined perhaps a bit by the return of King’s pet “Kite Man!” joke), but I suppose I’d like a bit more information as to how and why these people became casualties of this war. That is, while I understand how criminals like Falcone’s men or a crooked plastic surgeon might fit into this narrative, I’m less certain on how all of these civilians got involved. Bruce’s narration suggests that they were somehow “stuck between the monsters,” but since we never get a street-level view of this war (once again summarized in stunning but narratively static splashes by Janín), it’s hard to imagine what this war actually looks like. Is it actual firefights on the street, and these folks were simply caught in the literal crossfire, or are these mostly victims of the kind of random murders we saw Joker perpetrating at the start of the issue? It’s clear King wants these victims to be more than statistics, but we don’t quite have enough context to parse their deaths into separate tragedies.

Wow, Michael, I really didn’t mean to fixate on those two moments — there’s so much to talk about in this issue — but I seem to have already burned through my word count. I’m curious to hear your thoughts on how effectively the weight of those deaths comes across, but I can’t imagine you and I could write this piece without acknowledging that homage to the “Mirror!” scene from Tim Burton’s Batman. I definitely chuckled at the recognition, but I wonder if there’s more to glean from putting the Riddler in scene we so strongly associate with the Joker.

Michael: Full disclosure: I’m not crazy about Tim Burton’s Batman, but let’s see if I can divine anything from that famous mirror scene that Batman 26 homages. In 1989’s Batman, Jack Napier asks for the mirror to see the results of his mob doctored plastic surgery. Jack takes a look at himself in the mirror and begins to go mad with laughter. I’d say that this moment — not when he falls in the vat of acid — is when Jack becomes The Joker.

The mirror scene in Batman 26 provides a similar “delayed rebirth” for The Riddler. It’s clear that Tom King’s Riddler is a different, more violent Riddler than previous incarnations. In the first chapter of “The War of Jokes and Riddles”, he stabs a police officer to death — more brutal than anything we’ve seen from him before. While Batman 25 marks the introduction of this new, dangerous Riddler, it could be said that this “rebirth” doesn’t take place until he sees his gunshot scar and carves a question mark onto his chest.

What is this a rebirth of though? Riddler, of course, speaks in riddles. As he carves out his homemade question mark tattoo, Riddler asks the (dead) doctor a series of riddles that all have the answer “nothing.” Is the “nothing” what Riddler is feeling? The impetus of this “War of Jokes and Riddles” is basically Riddler and Joker wanting to feel something again. They no longer get joy out of their respective “gimmicks” because of their foil, Batman. It’s probably not that coincidental then that Riddler is trying to feel something and he cuts himself.

The war between Riddler and Joker is a blend of the two villains’ egotism, nihilism and depression. Both of them want to be the one to kill Batman and they don’t really care who gets in the way of their self-destructive path. I think that Riddler (a literal enigma) is a more difficult character to write than Joker, which actually makes it harder to decipher his feelings. What’s odd is that Tom King and Mikel Janín make The Joker — the poster boy for comic book homicidal maniacs — the relatable one.

No longer able to laugh at existence, The Joker has been looking for ways to get him to crack a smile. Here Janín gives us the very striking sequence of Joker practicing his smile in the mirror. In one panel he uses his hands to stretch his face — quite literally forcing a smile. The root of all of this may be a fantastical villain’s desire to kill a hero but I found this scene to be a very powerful demonstration of depression. 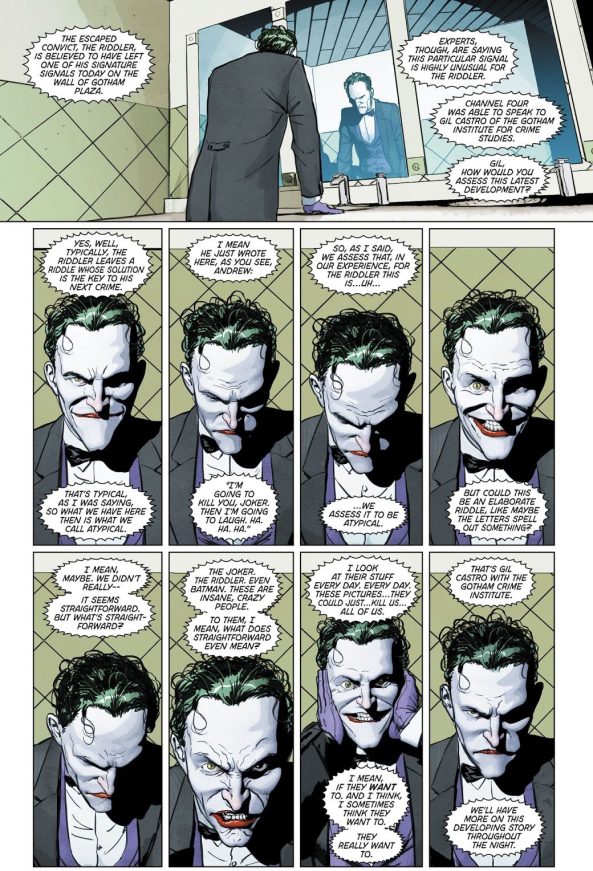 I believe that we can all relate to the feeling of “putting on a smile” on days when we’d rather tell everyone around us to leave us alone and go to hell. Janín’s portrayal of the “sad clown Joker” is very reminiscent to the one presented in The Killing Joke, which I’m sure is no mistake. Besides the time he spends practicing a smile in the mirror, we have yet to see Joker produce a genuine smile. I’m curious to see the moment in this arc where King sees fit to have The Clown Prince of Crime smile — if at all.

I’m equally curious to how Gotham’s villains decide to fall in line in the Riddler or Joker camps. King and Janín spend a decent amount of time focused on Riddler’s persuasion of Poison Ivy and I’d like to see similar “origins” for other Arkham Asylum alumni.

Janín lays out the Riddler and Joker teams on two separate double page spreads, so we know who’s on what team but we have yet to know why. A lot of these criminals can be easily bought — Deathstroke, Deadshot, Killer Croc — but I think that certain characters like Two-Face would rather run things themselves.

Janín’s “team pages” implies that all of these Batman villains have already established themselves in Gotham, but notice that The Penguin is not among them. Batman 26 introduces Oswald Cobblepot as a Falcone errand boy until Joker promotes him to Ambassador to The Clown Prince. It’s possible that this story will serve as a soft reboot for The Penguin, and I wouldn’t be surprised if he becomes a major player in Riddler and Joker’s war.

King has pitched “The War of Jokes and Riddles” as a sin that Batman has never confessed to anyone until now. I like that King places focus on Batman’s obsessive reverence to the victims of this war, remembering who they were and who they loved. However I’m assuming that Batman’s “sin” has to be something greater than that, right? Either way, do we think that Batman keeps a running tally of all of the people that have died as a result of his enemies’ machinations? That’s gotta be multiple encyclopedia volumes, right?