Filling in for a regular creative team on a comic book is hard all around, for the readers and creators alike. Pete Tomasi and Patrick Gleason take a break for Superman 26 and writer/artist team Michael Moreci and Scott Godlewski sub in.  I didn’t love the previous “Black Dawn” story arc, but it was Tomasi/Gleason story so it jibed with what had lead up to that point. One of the biggest things working against Superman 26 is Moreci’s characterization.

Superman 26 tells the age-old tale of father and son not understanding one another. While they’re out superheroing, Clark suggests careful planning and strategy while Jon prefers to go in headfirst. This is paralleled by a series of flashbacks where young Clark is similarly defiant of Pa Kent when he lets Clark run the farm for a day. 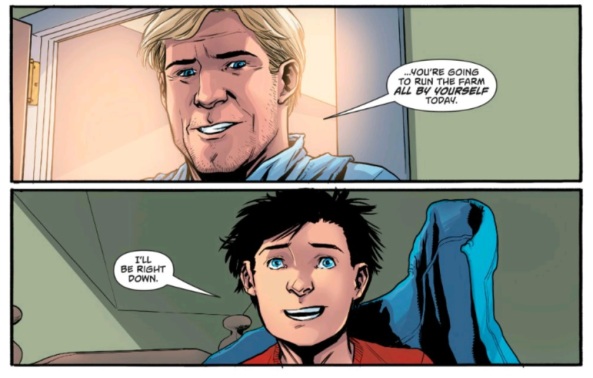 Oh Clark, only you would be so excited to be the head farmer for a day.

Moreci writes a story of a father and son eventually sympathizing with one another — which is a story that is more appropriate for Bruce and Damian, not Clark and Jon. Up until this point, Jon as very much been his father’s son: brave, humble, and very respectful. The way that Clark and Jon butt heads here seems to come out of nowhere.

Moreci tries to tie it in to Manchester Black’s tampering last issue, but that still doesn’t really work.

I like the narrative structure of this issue but not so much the story itself. It makes perfect sense that Clark would look to Pa Kent when he has problems with his own son, but it also puts Pa Kent in this strange place of messianic Farmer Brown. The resolution between both sets of fathers and sons is vague and could be boiled down to “try hard but don’t try too hard…or something.”