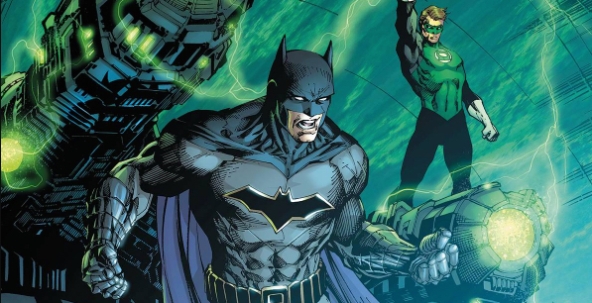 Bruce. We need you to explain what’s going on here.

Michael: Recently I watched the entirety of HBO’s “The Leftovers,” which I enjoyed immensely. One of the show’s theme songs is Iris DeMent’s “Let the Mystery Be,” which means exactly what it sounds like: don’t try to find the explanation in everything, just enjoy the ride that the unknown provides. Mainstream comic book readers don’t subscribe to this philosophy when it comes to the capes and tights crowd, myself included. Dark Days: The Casting is a dense issue that will likely have our kind baffled as to what we just read.

Am I the only one who hasn’t been clear on what Metal is going to be about? In the age of solicits, leaks, and previews that’s a rare feat for a major comic book event to accomplish. Sure, we have gotten the sense that Nth metal and a “Dark Universe” are going to be involved but that’s about it. Dark Days: The Casting further emphasizes that Nth metal is the inexplicable missing link in the DCU that connects the Hawks, Batman, The Green Lantern Corps, and Duke Thomas, among others.

Scott Snyder and James Tynion IV write a story that contextualizes Snyder’s Batman run in addition to brushing up against a few mysteries of DC Rebirth. The Court of Owl’s electrum, what happened to The Joker at the end of “Death of the Family,” and dionesium are all connected to Nth metal. The Joker often steals the focus in a given Batman story and my write-up will be no exception.

While Snyder has stated that Metal will in no way answer the Rebirth question of “The Three Jokers,” it’s hard not to have that in mind with the recent revelation that Batman has had Joker — drawn in his Endgame look — trapped in the Batcave for some time. Continuity mysteries aside, the main question we all have is “why is he down there?” Joker claims to Hal Jordan and Duke Thomas that he’s trying to prevent a “dark crisis” that has to do with unearthing the Nth metal.

Hal and Duke are surprised and suspicious that Joker would be trying to do the right thing, but I’m more concerned with the fact that he sounds very sane. Throughout his Batman run, Scott Snyder has proven to us that he knows how to write a creepy, believable Joker. Here, he’s only distinguished from Duke and Hal by Steve Wands’ letters. Hal himself is confused as he asks Joker “where’s the joke in all of this?”

I was never a fan of the New 52 pairing of Batman and Green Lantern in Justice League but here Snyder and Tynion make it work. Whereas New 52 Hal would be the dumb jock and Batman would be the voice of reason, Snyder and Tynion make the two equals. Hal is appalled at the fact that Batman would hold Joker prisoner, citing Justice League bylaws and Guardian edicts. This is Hal Jordan as a cop, dealing with the extreme vigilantism of Batman. Another reason I love Hal in this issue? He lays it all out for us.

Sometimes a little bit of accusatory exposition is just what the doctor ordered. Hal is serviced very well in this issue as a hero, colleague, and mentor. The only part I was kind of disappointed with was an excellent story moment that lost its kick on the continuing page. Hal brags to Joker that he’s in trouble because Hal is a “decorated member of The United States Air Force” and he just landed in the Batwing. When the scene picks up a few pages later John Romita Jr. draws Hal with Joker in the Batwing’s claw grip. Is oversized claw technique in Air Force basic training?

Besides the Nth metal itself, a lot of the direct correlation between Hawkman’s journal and the present day DCU is still uncertain. However, Snyder and Tynion make a clear thematic connection among Hawkman, Duke, and the forming of the Nth metal itself. As the issue comes to a close Hawkman writes how we are not masters of our destiny but the exact opposite. 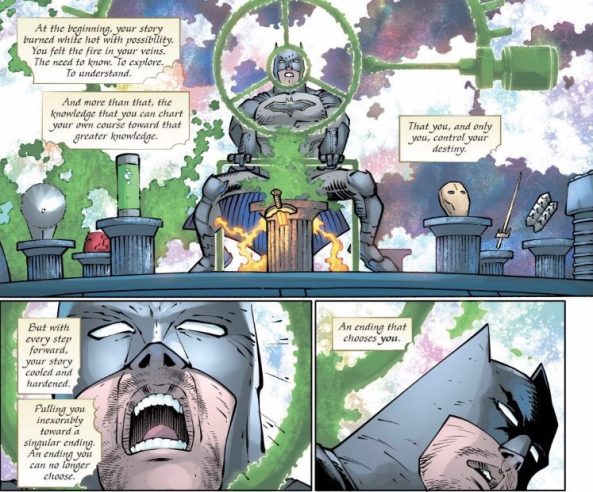 From what The Joker told Duke and what we eventually see, it’s apparent that Duke might not be in control of his own destiny. Snyder and other Bat writers have had Duke kick around the Batcave rather aimlessly with no purpose or nickname for a couple of years now. Dark Days: The Casting would have us believe that it’s all due to a greater purpose. It seems that, like Hawkman, Duke is finding himself in a preordained adventure and all he can do is play his part.

There’s a lot of talk of “light and dark” and “bats and birds” in Dark Days: The Casting. While I like The Joker’s simplistic idea of once again reducing it to “bats and clowns,” there’s obviously something else going on with the light birds and the dark bats. In addition to the aforementioned light/dark and bat/bird, another pair of phrases that pop up is “sigil and signal.”

The first time “sigil” is brought up is in reference to “the demon who took the sigil of the great and terrible bat.” Later on Joker refers to Duke as “the signal” of something that he can’t allow to pass. If Joker’s to be believed — and I think he is — both Duke and the bat demon are to be seen as harbingers of the end times. And I know it’s probably the Grant Morrison Batman fan in me, but I can’t help but notice the design that Andy Kubert gives this bat demon is similar to Barbatos — the god that Dr. Hurt worshipped. It’s a stretch, but I had to mention it.

Oh man Mark, what did you think of this very very thick issue? Do you think that this might’ve been better served if it was split up into two issues? Were there any DCU Easter eggs that you really dug? The opening Hawkman pages had quite a few by my count. Also, I think I would read an entire series of DC’s immortals like Ra’s al Ghul and the Wizard Shazam just hanging out.

Mark: I kind of hate this issue. The previous Dark Days entry was not a perfect comic, but it was at the very least approachable in a big, dumb blockbuster movie kind of way. Yes, the plot was murky, but it was easy to chalk that up to the issue being the first entry in a multi-part story. Now after reading The Casting, whatever greater story Snyder and Tynion are trying to tell is more than murky, it’s impenetrable.

And I don’t know that splitting this story up over two (or even more) issues would help resolve the main problem: I just don’t understand enough about what Hawkman is up to to care about it. Snyder and Tynion need to choose between Hawkman’s monologues taking up half the issue, or Hawkman speaking in nothing but vague platitudes, because their current approach of doing both is not working. And while Snyder has earned enough goodwill to trust that it’s all leading somewhere eventually, it’s exasperating right now for Hawkman to recount a story involving Ra’s al Ghul, only for Talia to show up a few pages later and explain the whole thing again for the cheap seats.

If you strip out the Hawkman panels, you’d at least be left with a serviceable Batman tale, but even here the usually reliable Snyder and Tynion fumble in unexpected ways. With the reveal that Duke is biologically connected to the Nth metal, we’re perhaps beginning to see the first notes of Snyder’s long term plan for his previously aimless creation, but Duke is also saddled with some deeply bad dialogue throughout the issue.

Michael, neither of us even mentioned Wonder Woman showing up for a few seconds to gift Batman with Chekhov’s Sunblade. It’s barely worth mentioning since Batman passes it on to Talia mere moments later, but it goes to show how many incidents that fail to register this issue has. This is a seriously chatty issue, with page after page given over to characters doing little but looking at each other so as to not get in the way of the enormous dialogue boxes crowding the panels.

Between the overly expository writing and the art duties being divided among three pencilers, three inkers, and two colorists, the seams are really beginning to reveal Dark Days as a hastily cobbled together event series.