I think it’s safe to say Maps Mizoguchi is the breakout character of Gotham Academy. Her enthusiasm for adventuring is infectious, and often positions her as a kind of audience surrogate. Plus, she runs circles around the rest of the Detective Club in terms of actual detective skills. In many ways, she’s the Hermione Granger of Gotham Academy, skilled beyond her classmates in just about every way that matters. But she’s not quite Hermione Granger. Importantly, while she may outpace her friends on the detective front, her relative youth means that she’s not quite as emotionally mature. It’s a detail that hasn’t come into play much thus far, but issue 11 reveals that it might just be Brenden Fletcher, Becky Cloonan, and Karl Kerschl’s smartest piece of groundwork.

In the wake of Kyle’s injury, Maps has lost all patience for Olive’s possession, calling her a witch and a villain. It’s the kind of unbridled emotional response you’d expect of anyone fearing for the life of a loved one, but rings especially true from the mouth of a young kid. Fortunately, Pom and Colton are there to lend some stabilizing perspective, guiding Maps back towards the path of helping Olive overcome her troubles. Of course, its easy to entice maps with the promise of some adventuring. She resists for a while, but by the time she’s traveling through secret passageways in Wayne Manor, she’s forgotten all about her grudge. But her view of heroism is still naively all about action.

She’s living out her dreams here, but when the mission comes back to helping Olive, she’s ready to let somebody else handle it. Which is to say: her motivations are still stubbornly selfish. She’ll adventure because she likes adventuring, but she’s not going to stick her neck out for someone she dislikes.

That is, until she gets a much-needed pep-talk from Robin: 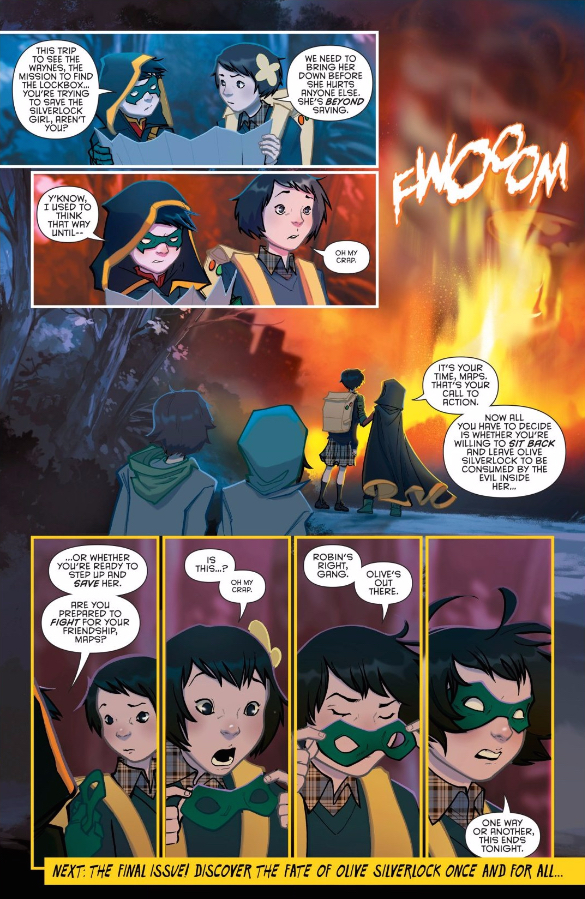 It comes with more trappings of superherodom, but the lesson is in there — Maps is ready to do the right thing, even if she doesn’t like it. Her language is still a little ambiguous — to my ear “One way or another, this ends tonight” sounds like she’s more invested in ending Calamity’s rampage than saving Olive — but at the very least, she sees the solution as her personal responsibility. Her growth into the hero of this series isn’t quite over, but this issue gives her a clear direction as this series accelerates into its final issue. Obviously, there are a lot of threads to wrap up next month, but I love that Maps’ coming of age was one of them.