Taylor: About a month ago, the Golden State Warriors won the NBA  championship with ease. So easy was their win, in fact, that many pundits are calling them a super team that practically has the next several championships already won. It’s tempting to think that building such a dominant team is the result of careful planning and deep pockets. In actuality, what brought so many talented players together was a series of fluke accidents and coincidental timing that amount to little more than dumb luck. In much the same way, another super team is also being built, albeit this one on the pages of Astonishing X-Men. That might sound like a haphazard way to build a team — maybe it is — but it’s also a refreshing take on the typical team-up concept.

When Psylocke is psychically attacked by Amahl Farouk, aka the Shadow King, she sends out a psychic distress signal to any X-Man near enough to hear her call. Those who receive this SOS are a random group of mutants who otherwise wouldn’t be joined together if not for the sheer coincidence that they all happen to be near Psylocke when she is attacked. 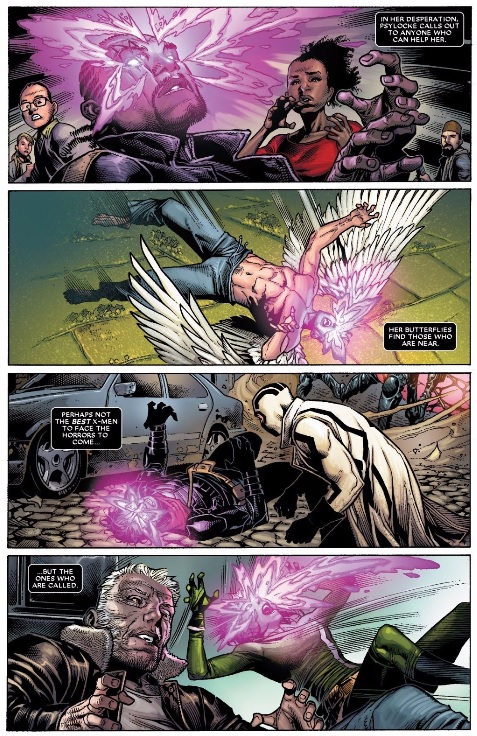 This is a refreshing take on how a super team assembles. In other team-up issues, heroes are brought together by an agency like S.H.I.E.L.D. or by a team leader of some sort. In this case, the reason why Gambit, Angel, Bishop and Rogue are getting together is simply a matter of their geographic proximity. Sure, they know each other and in some cases have even worked together in the past, but the way they are being joined together in this instance feels organic. Additionally, characters like Logan and Fantomex didn’t even receive the Psylocke’s cry for help but just happened to be with people who did. Their involvement in the team-up is even a higher degree of separation than the others. This seemingly haphazard assemblage of mutants feels fresh because it lacks the formulaic team building devices other series have used in the past.

There are other ways in which writer Charles Soule bucks the trend when it comes to a team-up issue. Most of the time, the inaugural issue of a team-up features mini-intros for all of the team members. This is a useful tool that quickly describes what abilities each character has and briefly what their personality is like. Recently, the trend in Marvel has been to fashion these intros into clever little quips that break the 4th wall a little bit so as to be more engaging. Soule decides against that here and the issue is more interesting for it. Take, for example, Bishop’s introduction.

Bishop is described as being a soldier waging an unending war against a future apocalypse that is always at risk of happening. That introduction might lack flair and the expected tongue-in-cheek description of a character, but it describes exactly who Bishop is by painting him as an unrelenting force against the powers of evil. Further, when you think about the type of person who would choose such a life, it becomes clear what type of hard-ass personality they must have.

While Soule gets off to a good start with this issue, the third act gets bogged down in scenes that lack the simplicity and unprocessed feeling of the first two thirds of the issue. After saving Psylocke from the Shadow King’s attack, the new mutant team has a discussion about their next steps. Psylocke warns that they need to enter the Astral Plain immediately before the Shadow King uses other psychics as weapons. At this point, Bishop and Angel share an exchange that stands out as being awfully stilted.

The two are talking about staying in the physical world to protect the other mutants as they go after the Shadow King. As seen above, the two share some thoughts about the other’s ability to act properly as a guardian at this time. Several panels, including those above, are devoted to their exchange but it’s unclear why. If Bishop and Angel have a beef with each other, then that needs to be made more clear. If not, then why so much time devoted to a scene that detracts from the latter portion of this issue? It’s a confusing bit of this issue and it lacks the natural flow that is present elsewhere, and the end of this issue suffers for it.

Patrick, what do you think of this new mutant team? Do you think they have a natural chemistry that will allow them to work well together or is this scene with Bishop and Angel a harbinger of things to come? Do you have any thoughts on Jim Cheung’s artwork?

Patrick: I like this group of mutants, if for no other reason than what you’ve already laid out. They don’t seems like a natural team; in fact, their coming together is wholly forced, often against their own wishes. Taylor mentioned the obvious beef between Bishop and Angel, but we’ve also got the failed romantic relationship between Gambit and Rouge to deal with, to say nothing of Old Man Logan having murdered all of these characters in his home world. Bishop makes a joke about this last one, and it might be the darkest moment in the issue.

The narration has already warned us that Bishop will stop at nothing to prevent various horrible futures from befalling mutant kind, and here’s a living embodiment of one of those futures standing right in front of him. Later in the issue — and, it should be noted, after the action — Beast shows up to offer his help. Beast’s relationship with the X-Men has been strained since his soft-betrayal in the war with the Inhumans — a fact that Rogue specifically brings up (in case any readers opted out of IvX). Beast says he received Psylocke’s distress call, but we have to take his word for it — we never see it on the page. Even if the rest of the characters don’t find Beast’s appearance suspicious, the readers definitely should.

But this team-up-against-all-odds plays in to the final page reveal, which is a big enough deal that I’ll offer one more out for people who don’t want to be SPOILED.

Charles Xavier is alive on the Astral Plane, imprisoned by the Shadow King. It is unclear whether the issue is being narrated by the Shadow King or Xavier — both speak in solid black speech balloons with white outlines and white text, perfectly matching the narration boxes. The voice of the narrator is incredibly sympathetic, leading me to believe that this is the running narration of none other than Charles Motherfucking Xavier. It’s a heartwarming realization, giving new life to the metaphor about blind children and psychics. Soule’s prose is never as poetic as it is during these first couple pages, effortlessly drawing parallels between real world disabilities and superpowers, while celebrating service over solitude. This is the dream of Charles Xavier: that mutants work together to save them from their unique hardships, no matter the cost.

There’s something elemental about the repeated imagery of psychics succumbing to the awesomeness of their power. Artist Jim Cheung takes the idea of repetition very seriously, posing these nameless psychics in alarmingly similar ways, drawing them all from the same dramatic angle and surrounding them with concentric circles.

Those rings emanating out from the corpses on the ground immediately call to mind the common depiction of Xavier’s powers. It’s iconic — imagine Xavier touching his middle and pointer finger to his forehead and you’re already hearing the quiet “wub wub wub” of telepathic circles pulsing from his head. Further, the simple idea of a dead psychic recalls one of Xavier’s biggest failures — losing Jean to the Phoenix. My point is that we should have seen that last-page reveal coming, because Soule and Chueng seeded it so fucking well.