Green Arrow’s recent “Hard-Traveling Hero” arc is basically an excuse to have Oliver Queen do a tour of the DCU — and I have absolutely no problem with that. After their team-up last issue, The Flash passes the Green Arrow-shaped torch to Wonder Woman.

Another thing to love about “Hard-Traveling Hero” is that it’s Benjamin Percy’s quest to legitimize Green Arrow in the eyes of DC’s heavy-hitting superheroes.

After a brief crime scene investigation, Green Arrow 27 gives The Flash a clever exit as he takes evidence back to the lab.

The majority of the issue is devoted to Oliver re-introducing himself to Wonder Woman as they work to foil an assassination attempt in Washington D.C.

Wonder Woman’s lasso of truth might be one of my favorite superhero storytelling devices. It’s a shortcut that allows characters to avoid petty squabbles and truly see what’s in someone’s heart. We don’t get any indication how Oliver got tied up in the lasso, but given his overwhelming humility I’m gonna guess that it was his idea.

I think that this is Jamal Campbell’s first outing as Green Arrow artist and I think he adds a unique vibe to the issue. He brings a balance of Juan E. Ferreyra’s haunting imagery with Stephen Byrne’s softer, kinder style. Oliver mentions how Wonder Woman is an “icon” and Campbell follows suit by drawing her with the power and poise she deserves. The standout iconic image of the issue is of Green Arrow standing defiantly in front of the Lincoln Memorial as a tattered American flag waves in the background. 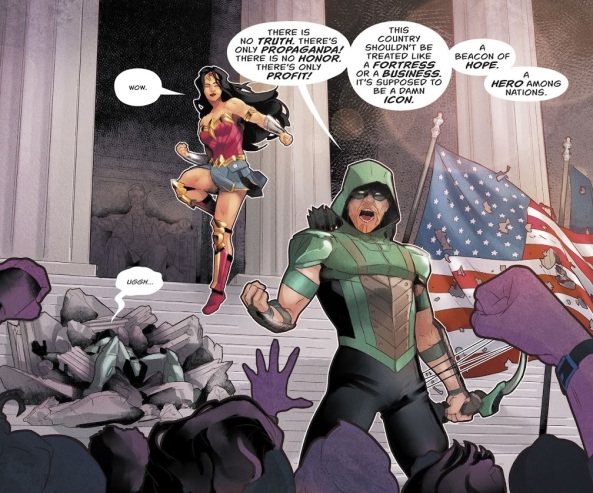 On the surface, Green Arrow 27 is your standard superhero team-up/villainous-plot takedown. On a more relevant level, this issue is about the complicated systems that America put in place to protect the people, but have been twisted to be used against them instead.