Fear of intimacy is one of those tropes that’s so common it’s practically become cliché (Friends was on at the gym the other day, and I couldn’t help but to roll my eyes at Chandler trying to run away from his wedding), yet its based on very real, very understandable fears. Without intimacy one would lead a very lonely life, yet opening yourself up to another person is, ultimately, a risk that takes a surprising amount of courage to do. That’s something America Chavez has already discovered in America 5, an issue that shows the benefits of her emotional intimacy even as this same quality places her in grave danger.

The true emotional intimacy here is shown between America and her BFF Kate Bishop, a.k.a. Hawkeye. Gabby Rivera, Kelly Thompson, and Ramon Villalobos create a truly sweet relationship between these two former-Young Avengers, showing how far they go to spoil each other, while also forcing each other to take down their emotional walls. So much of the joy in this issue just comes from Kate and America’s rapport as they road trip across the country singing Gwen Stefani songs, but it’s to Kate that America is also able to turn for help in the ongoing case that’s followed her across the past four issues, as well as finally tell the story of her kinda-sorta teenage ex, Magledena Velez. It’s clear that these two women being open and honest with each other is a very good thing.

In contrast, America and Magledena didn’t work out exactly because Magledena couldn’t open up to America. 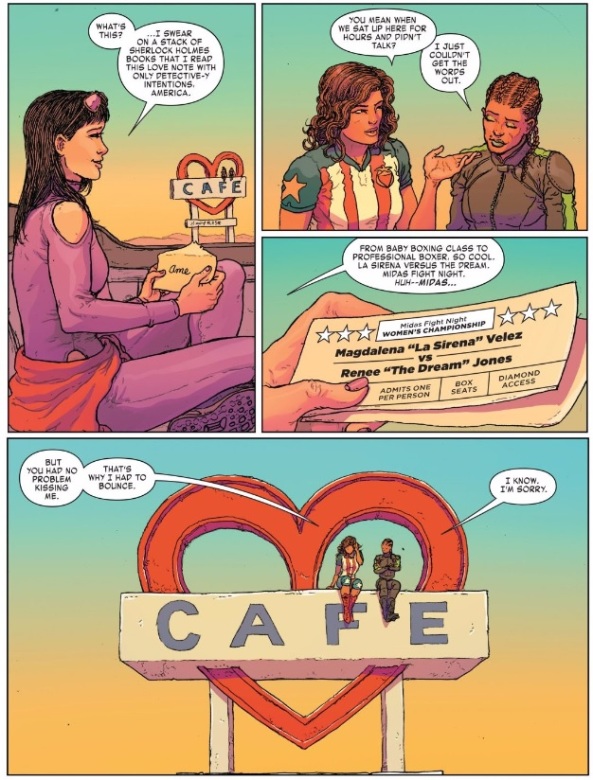 It strikes me as remarkably mature of 15-year-old America to realize that this kind of fear wasn’t a good foundation for a relationship. Regardless, as an adult Magledena is able to admit her feelings to America in a way she never could before, and America rewards it with a kiss. Unfortunately, this time it doesn’t pay off.

Being intimate with someone is always a risk, and inevitably somebody will betray your trust. That doesn’t mean it’s not worth doing, though. After all, Magledena may have put America in danger, but Kate Biship ends the issue rushing to America’s aid with everything she’s got. A friendship like that is worth every one that fails.