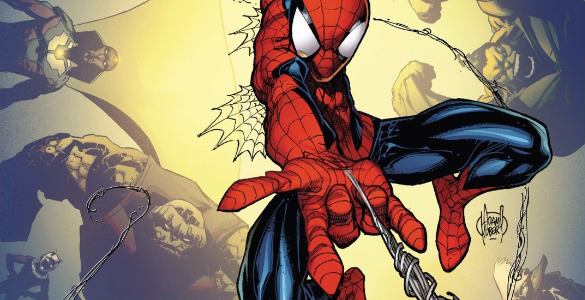 It’s always easy to score political points against the president by suggesting they’re spending too much time relaxing. Folks of every political persuasion have made this argument at some point or another, and it always sounds reasonable because the President obviously has more important things to be doing. With great power, as the saying goes, must also come great responsibility. But of course, even Presidents are people, and while we should certainly hold them to a high standard in terms of workload (that it’s a stressful job is part of the job description), expecting them to never take a vacation is inhumane. This is a point Peter Parker has always fluctuated on. He obviously respects the responsibilities that come with his powers, but he’d also like to be a human being with a fulfilling professional and personal life. Usually, that means he’s constantly running out on dates or jobs to save the day, but Chip Zdarksy and Adam Kubert find a decidedly different approach in Peter Parker: The Spectacular Spider-Man 2.

In the end, it always comes down to priorities. The responsibilities that Peter might have at school or a job are important to him, but often are less important than his responsibilities as Spider-Man. We understand the hierarchy there just fine, but it becomes a little more muddled when trying to weigh the relative importance of some of those non-Spider-Man responsibilities. Take, for example, Peter’s decision to go on a date in this issue:

Normally, this is the kind of thing he only does when he doesn’t have any pressing Spider-Man duties, but here, he’s chosing putting a pin in two big active cases. I mean, sure, he’s right that everything “will still be here in two hours,” but pausing saving the day to go on a date feels like the exact opposite of the Spider-Man formula.

I suspect that’s the point, but it’s hard for me to read Peter’s priorities throughout the issue. An “off the books” agency’s even more “off the books” plans to take down Superheroes seems about a million times more pressing than a mysteriously hacked phone, but while Peter was happy to blow off his plans with Johnny for the latter, he puts the former on hold for a first date with a complete stranger. I guess he was just that desperate for a date? It’s an inversion of a trope, but that was a trope that has defined our understanding of a character’s priorities for decades. Again there may be a larger point to all of this — Johnny seems to suspect some kind of foul play — but for now, it leaves me confused as to how Peter Perker defines “great responsibility.” Are the things he’s dealing with just not important, or what?

2 comments on “Prioritizing Responsibilities in Peter Parker: The Spectacular Spider-Man 2”