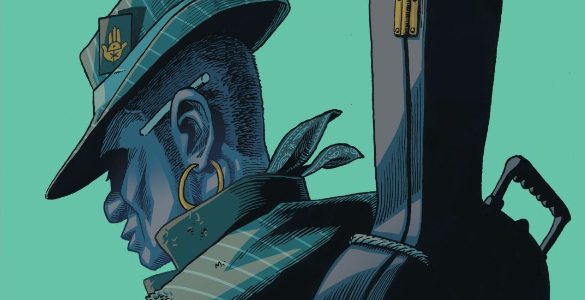 Godshaper weaves a tale of discrimination with gorgeous parallels to our current day within a new universe. Period. While parallels exist here between the “Dark Materials” series, the comic lives in its own plane, dealing with social issues in a novel, resonating way. While issue four does not break down any new walls in this series, the base-line for this comic is so consistent and lovely and revealing that I don’t even mind.

A small step forward reveals itself in the narrative here as Ennay receives some hardcore mob justice at the hands of the anti-Shapers and the status quo is mixed up slightly because Ennay is separated from Bud, his independent god who certainly carries some weight within the lore of the story. Thus far, the creative team has done an incredible job of making me care about Ennay and Bud as much as the larger plot of the wheels within wheels presented.

This issue carries the character far by giving us a deep insight on the mindset of the the Cantik group, who — despite their underground, dissenting vibe — still don’t really support the Shapers, while also giving the audience some great touchstones on the socio-politics of the world, hinted at but now realized with action. Artist Jonas Goonface draws the heck out of this title, showing us the highs of performance art with a receptive crowd, then the fallout and hell of a hate crime spectacularly, with incredible attention to detail without sacrificing the aesthetic: 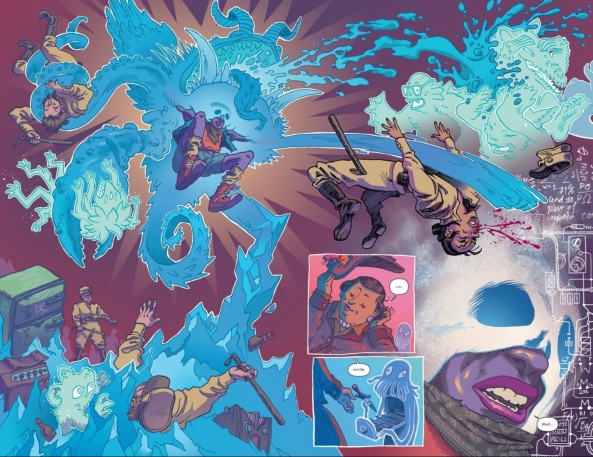 The colors, the loose lines, the 1950’s Beats dialogue adapted to a new context all add to a wonderful product, secure in itself and its world-building. This series never stops surprising me while also playing within its own rules; it’s an incredibly comforting feeling, as an audience. This series moves on, inexorably, revealing what it needs to in the same way a loving relationship does, over time, and constantly surprisingly me with the notes I hope it will hit.