Ryan D: Since last issue’s final splasy page reveal — which Brian K. Vaughn and Fiona Staples love doing to us — my friends and I have been theorizing what the heck is happening with this male-looking version of Hazel who appears to Alana. The easy explanation would be that Alana is sick with her stillborn child and hallucinating. I find myself extremely pleased now, after reading this issue, that the approach the creative team took here is much more dramatically interesting than a mere hallucination. Having this apparition be a side-effect of the magical abilities which Alana temporarily sports due to her miscarriage helps to further the lore of the Horns’ magical abilities and the context in which they were used, and the fact that Marko, Alana, and Hazel all share sight of this magical illusion-child offers us crushing moments like this:

Oh no. What are you doing to us, creative team? It’s one thing for Hazel to encounter a “what if” version of her hypothetical brother, but it’s another to interact with it in such an intimate way. Staples draws this panel so well, playing into it’s ethereal form by not only having the two kids hug, but actually merge and share a face. It’s a devastating depiction of the type of mind games the pain of the loss of a child can cause, and  though the imagery is heavily literal here, that didn’t stop me from getting punched directly in the feelings.

Thematically, having Kurti, the ghost child named after the deceased play-pal of Hazel’s from the now obliterated comet Phang, interacting with their daughter gave Alana and Marko some heavy talking points. Marko asserts that this is a gift to be treasured while Alana maintains that it actually borders on cruel and unusual punishment. This episode in the family’s life offers some large questions to add to the pile when considering one of the over-arching tropes in this series: how do you raise a child in a cruel, random universe and how will that child turn out?

Speaking of family, our very own Ryan Mogge wrote a great piece last month regarding the parallels and contrast between the family unit accosting Petrichor and the protagonists we’ve been following since issue one. In issue forty-five, the similarities between to two enclaves deepen past the familial concern and parental protectiveness which both share. First of all, I’m interested in the technology which Maw, Paw, and Kidd sport in this issue.

Here we see the odd “tentacle shotgun” which apprehends Petrichor, but we also see the family use a communication device to translate languages and learn that Kidd wears a dragon-hide coat. Much like how Alana, Marko, and Hazel accumulate trinkets like the bat shield and sword Marko once wielded, this family also possesses what seems to be artifacts from their journey together. Whether we empathize with this new unit or not, we can’t ignore that they have certainly been through plenty in the same way Marko and Alana have. And after all — everyone is the hero in their own story, right? I do love, though, that in a universe full of laser weapons, magic, and interstellar travel, the mode of punishment and interrogation utilized by Maw and Paw came in the form of something as simple and timelessly terrifying as a slipknot and noose.

One other small detail in the pages featuring the “other” family which stood out to me would be the panel composition in many of their pages. While it might be easy to chalk these skewed panels with tilted gutters to only signify that these are action pages, I read a bit more into them. In this issue, plenty of action takes place, but when the focus is on Alana, Marko, and Hazel, the panel edges stay strictly horizontal. I dig the idea that Staples may be leaning into this idea that the other family is, in some way, a distorted version of our protagonists by putting the gutters on a bias, while simultaneously asking the audience to reconsider our personal bias regarding some of the atrocious acts our heroes committed in the name of protecting their family.

Patrick, how are you feeling about this arc? I feel like the tone has shifted from last arc’s “bleak” to the current “heartbreaking”. And I feel like there’s some interesting stuff to unpack in the scene of Marko teaching Hazel her first spell. Whatchu think? And how great. Was. That. Fart?

But, absolutely: let’s start with Marko teaching his daughter the fulmo spell. Marko explains that the lighting magic is powered by self-doubt, and after telling his daughter that it’s okay to feel that way, she jolts her mother back to life. Seems pretty transactional, right? There’s a little more buried in his explanation, however. Before establishing how the spell is powered, Marko says the voltage from the spell cast by a full-grown man would be enough to kill Alana. Because we don’t have the relevant information yet, our first assumptions are that an adult is simply stronger than a child, and the strength of their magic would scale accordingly. Vaughan never spells it out, but the implication is that Hazel simply has less self-doubt, and the resultant magic is only zappy enough to wake her mother.

We see that lack of self-doubt demonstrated throughout the issue. While Marko and Alana have to keep the spectre of their hypothetical child at a (more or less) healthy emotional distance, Hazel allows her self no such protections. Having Kurti around in any form is essentially paralyzing to Alana. Again, Marko takes the opportunity to explain properties of magic, while actually establishing the toll of their life adventures. He says, “every spell has a cost and this one is particularly expensive. Forecasting hurts the heart. […] The longer you keep this enchantment going, the more you risk cardiac arrest.” Marko’s laying out some useful exposition (which obviously pays off later in the issue), but he’s also allowing Alana to be totally naked her feelings on the matter.

No shit it’s hard on her heart. Alana’s not even letting herself believe or experience Kurti’s “life” in any meaningful way, but there’s no way to stop herself from seeing the relationship between her children.

This kind of “forecasting” is inevitable whenever you make a huge life-choice. How else can you make an informed decision but to play out all possible scenarios? The metaphor gets a little bit wobbly when we remember that Alana has already lost her baby — she’s not really giving anything up. Her son is already gone. That makes the arc’s fascination with abortion a little toothless, doesn’t it? Or at the very least, extremely fatalistic. Marko and Alana physically, biologically require the operation to save Alana’s life — live to fight another day. But that makes their journey less about a choice they make, and more about something they need to do. I understand that that is what abortion frequently is — whether or not the mother is in immediate physical danger, “life of the mother” is a mercifully broad category. The movement to support abortion rights is called “Pro-Choice” so perhaps I’m being tricked by our own rhetoric on this one. I do believe that the real issue is about access to safe, affordable health care options. So, yeah, I guess I’m saying I support Alana’s “choice” to live, but Jesus Christ, that sounds basic as fuck, right?

Ultimately, I’m interested to see where the narrative takes our characters at the end of this arc. The abortion doctors are said to be literal monsters that will murder both mother and child. Some terrifying propaganda, and Staples is able to back it up with imagery that should make us question what makes us terrified in the first place. 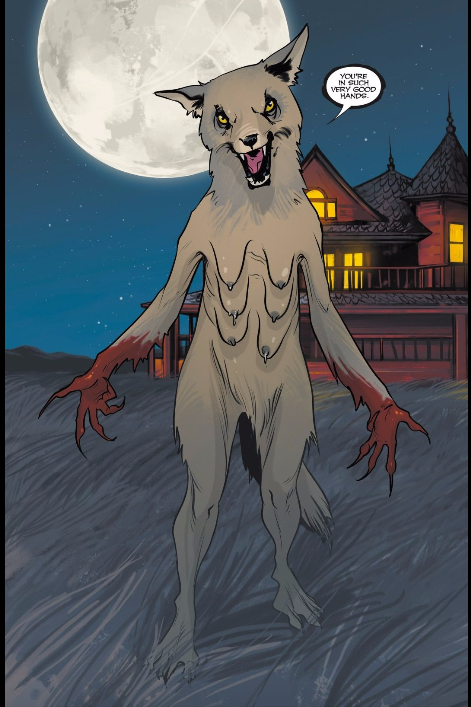 Bipedal wolf-creature, bathed in the light of the full moon, standing in front of a scary Gothic house? Awesome, all classic horror imagery. Where Staples put her Saga-spin on it is with the characters six sagging breasts. We’re seeing a nourishing mother — a creature that has already given of her body to raise children. But the distended body parts play into the blood on her hands, creating an image that is immediately off-putting. Seeing anyone elbow deep in blood implies a great many terrible things have happened, but blood is an essential and common part of reproduction — the ickiness of birth or menstruation that stays out of polite conversation. We’re not seeing a monster here, we’re seeing a reproductive health care supplier, and the conflation of the two is precisely the point Staples and Vaughan have been driving at for the last three issues.