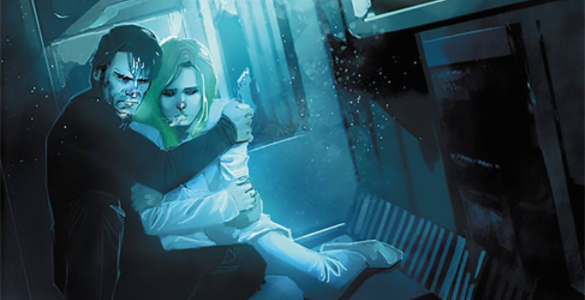 Letting go — of grudges, of hatred, of resentment — is one of the hardest things a human being can do. It feels good to nurse a grudge, yet it can feel even better to finally let go — there’s beauty, there’s true catharsis in it. With the incomparable Rod Reis on art, it’s impossible for Hadrian’s Wall 8 not to find the literal beauty in letting go, even as writers Kyle Higgins and Alec Siegel emphasize how truly difficult this action is for their characters.

And when I say difficult, I mean that Simon and Annabelle aren’t able to truly forgive each other and let go of their years of resentment until they’re moments away from death, freezing to death and nearly out of oxygen on a marooned, powerless spaceship. It’s a terrifying situation, but one Reis illustrates with a kind of beauty nonetheless.

Simon and Annabelle’s reconciliation begins playing out on this page, amidst the psychedelic beauty of the planet outside the ship’s window and the pristine, peaceful white of the cold and ice. It’s hard to say whether the kind of peace acknowledging their impending deaths can bring is what impels their change of heart, or if it’s their letting go that brings about this peace, but either way they’re intrinsically linked.

After finally admitting that he no longer wants to be mad at Annabelle, Simon collapses into her arms, bringing about the solemn, chilling beauty of this next page. 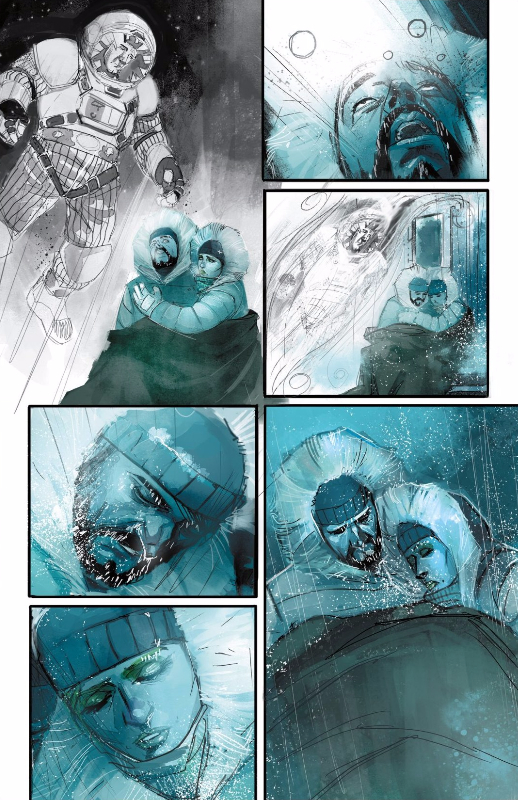 That final panel is the most peace these two characters have had — especially around each other — since their break-up all those years ago. It comes after “giving up the ghost” in those first few panels — both in the sense that Simon and Annabelle are seconds away from death, and in the sense that they let go of the ghost of Edward that’s always stood between them. Whether Edward’s ghost as we see him on this page is literal, symbolic, or simply a final manifestation of Simon’s withdrawal doesn’t really matter — it’s only when they finally expunge him from their lives that they can stop being mad at each other. That’s what finally brings them peace.

If the story had ended here — as I was, for a few minutes, convinced it had — it would have been a sad, but satisfying conclusion. Instead, Simon and Annabelle are rescued and, after recovering, have a chance to put their newfound resolve to let their grudges go into practice. It works; Simon even gifts Annabelle some much needed money, and the two go their separate ways finally happy and free. Reis again finds the beauty and joy in this moment, showing Simon walking away from the pain of his past — represented by Simon’s photos and pills — and into the blinding white light of infinite possibilities.

It’s a beautiful ending — both emotionally and aesthetically — and I can only imagine that it was as cathartic and powerful for the creative team to bring to life as it was for us to read.