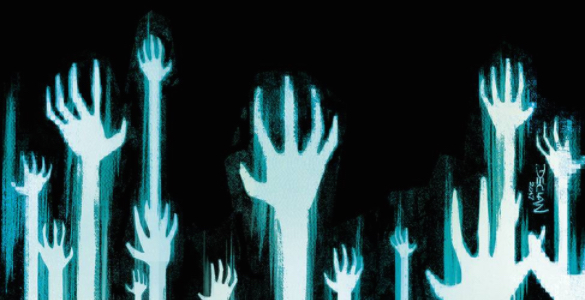 When do you know something in a given narrative is important? Is it someone in the story saying as much? Is it that that element keeps coming back? Or is it some subtler means of emphasis that can make even the first appearance of an idea feel meaningful? Ultimately, these methods aren’t mutually exclusive, but I do see them as existing on a kind of continuum of obviousness, with someone stating the importance of something as “impossible to miss,” and those subtler methods covering a wide range from “clear” to “ambiguous” (the scale theoretically continues into “unclear” and “impossible to detect,” though those will obviously be difficult to notice from a reader’s perspective). Then again, those elements can be used in ways beyond their perceived meaning. That is, a character could say something was important in order to mislead the audience, or, in the case of Injection 14, to draw our attention to what really matters.

To say that sandwiches have been a runner throughout this series is an understatement, but without any obvious thematic importance, I’m reluctant to see that as anything more than a kind of running joke. That is, based on repetition, we might ascribe some significance to sandwiches — a reading that is reinforced by Brigid’s assertion that “Sandwiches are important” early in this issue — but nothing in this series or this issue seems to support “sandwich” as a meaningful theme. Instead, I find Brigid’s statement is most important here in priming us for the actual thematic material:

Obviously, there are cues to the importance of this moment beyond the presence of sandwiches (everything from its placement at the end of a page to the fact that Declan Shalvey and Jordie Bellaire do away with the gutters for this image, bleeding the image to the edge of the page, such that the other panels seem to take place within this one), but it’s the content of Brigid’s statement that does the heavy lifting. “Myths are facts embedded in stories worth retelling.” It’s an assertion of the value of truth in fiction, pointing at something beyond the thrills of a story about a magical, sentient computer program. Writer Warren Ellis is using this story to “transmit knowledge” — even if we don’t totally know what that knowledge will be. I’m a sucker for that kind of meta-commentary, so may be ascribing more importance to this moment than will necessarily pan out, but I’ll be damned if everything in this issue doesn’t confirm my reading.

3 comments on “Emphasizing Theme in Injection 14”