By Patrick Ehlers and Taylor Anderson 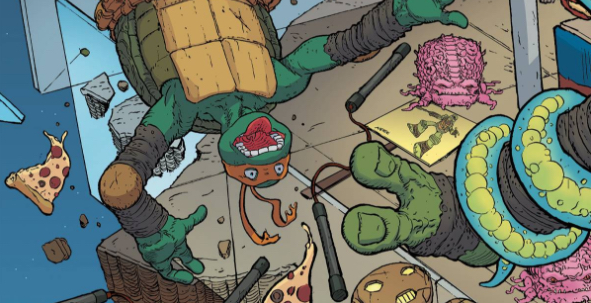 Patrick: I recently spent the week with my three year old niece. Like all three year olds, she’s totally incapable of not expressing her emotions — everything that upsets her triggers a screaming fit and everything that delights her… triggers a screaming fit, but just a different kind. Spending the day with her is, of course, equal parts charming and exhausting, but the thing that struck me the most was how honest that time is. She’s got no way of hiding, muting or dulling her emotional reactions. As a crusty ol’ adult, I’ve got decades of training tamping those things down, to the point where I have to actively attempt to express what I’m feeling. There’s a strength to being able to feel without filter, and the young simply haven’t developed that filter yet. Paul Allor and Pablo Tunica’s Teenage Mutant Ninja Turtles Dimension X 1 explores how that strength manifests itself in our heroes as they visit a planet that makes emotions manifest physically.

It’s kind of a bonkers concept — a planet with “emotion-based physics” — but, hell, we’re in Dimension X so let’s get weird. Allor understands that readers are going to come at this issue with their own emotional armor already equipped, so instead of starting the action with our Teenage heroes or on the surface of Go’Mo (the emotion planet), the issue opens on Hakk-R orbiting the planet aboard his spaceship. Hakk-R’s listening to Neutrino music, and says as much while talking to himself, but letterer Shawn Lee leads with some excellent color cues on the sound effects that just scream “Neutrino.” 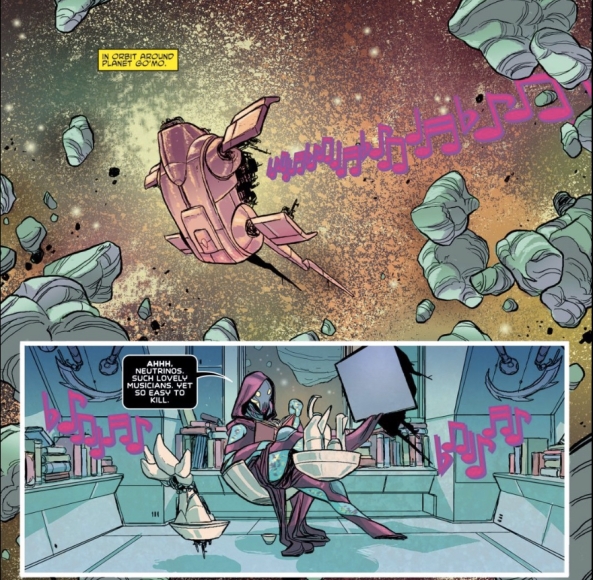 Those notes are not conveying anything, musically speaking: Lee is just throwing eighth notes, quarter notes and the odd sixteenth notes on the page with random flat signs. The meaning behind the music is the audacious color — fuchsia notes with a purple shadow. That’s almost an embarrassingly earnest color combination, evocative of something like Lisa Frank’s design aesthetic. This is also quintessentially “Neutrino,” as they’ve got the same kind of bubble-gum sincerity. Hakk-R reaches the emotionally-distant conclusion that the Neutrinos are weak, but that weakness allows them to create such great art. Hold on now, because I’m going to test the ductile strength of the transitive property with this one: emotion honesty = Neutrino music; Neutrino music = fuchsia and purple; fuchsia and purple = the logo of this very series.

Allor, Tunica and Lee are united in this mission statement: whatever weirdness is in Dimension X, the storytelling is rooted in emotional honesty. We’re a page in, and already the team has placed the reader on thematically solid ground.

What unfolds on the surface of Go’Mo is essentially a battle between deception and honesty. Hakk-R represents deception, lying to B’een, his assassination target and convincing the tiny blorp of a creature to come with him. B’een is a nakedly emotional creature, biologically empathetic, and his goopy design perfectly captures this. He’s essentially all face, giving Tunica one hell of a canvas to work with when acting the character. B’een spends most of this issue in some state of distress and he’s got no choice but to just express that.

Tunica has a gift for acting, and it’s a gift you can see demonstrated on more than just B’een’s face. Look at the acting on the Turtles in that final panel. Pointedly, Hakk-R is almost incapable of expressing emotion visually — his face is a static metal mask.

Which means that the advantage for being on a planet with emotionally based physics goes to our Teenage heroes. Fueled by nothing but his teenage rage, Raphael punches his way out of a cave-in and leaps aboard Hakk-R’s spacecraft. Hakk-R’s still in the atmosphere, but damn, that’s one mighty leap, bordering on flight. This forces the Turtles into a battle with Hakk-R. They’ve lost this battle a couple different times, most recently in Teenage Mutant Ninja Turtles 73, which came out on the same day this issue was released. The difference, of course, is that our boys can feel and Hakk-R cannot. Probably the most satisfying moment in the whole issue is when a grimacing Leonardo cracks Hakk-R right in his cold, unfeeling face.

As the first chapter in what’s bound to be an anthology of weird adventures in Dimension X, this issue sets the mini-series priorities perfectly. Taylor, what’d you think about this issue? I like that last page where Allor and Tunica tease that there might be something more to Hakk-R, surrounding him with B’een’s people, only to exit on an incredibly distant “No use getting upset about it.” Upset or no, Hakk-R’s face has been altered by the Turtles. Is there a feeling creature deep inside there? Or just a semi-unstoppable killing machine? Also, what do you think it means that B’een lives on such a desolate planet? Final prompt: is there a metaphor in B’een only being vulnerable when he’s taken off-planet?

Taylor: If there’s a metaphor there, I’m not sure I know what it is. Maybe it’s that we are only vulnerable once we chose to go out into the world and share our emotions with others. If that’s the case, the argument could be made that Allor is trying to tell us something about the experience of being an artist. That I can’t crack the code of this metaphor perhaps speaks to my inability to see exactly what Allor is saying about emotion in this issue. True, we know that the theme has something to do with emotion, but what exactly does Allor want us to learn about it?

There are a couple pieces of evidence that support different ideas about emotion. First, there’s the obvious example of the Turtles using their emotions to help save the day. When B’een is taken by Hakk-R it is only because Raph gives into his anger that the Turtles are able to escape a cave-in that has them trapped underground.

Looking at this example, it seems as if Allor is saying giving into emotion is the thing that will ultimately set you free. While variations on this theme have been explored by authors in countless stories, it’s rare to see an author so thoroughly state giving into you emotion is a good thing. After all, if Raph is so upset that he can punch down walls, what or who might he destroy when he’s really angry on this planet? The flip side of this can be found in Michelangelo who gives into his happiness which allows him to fly. In both cases we see that the Turtles are freed from their normal constraints by giving wholly into their emotion.

Earlier in the issue, though, Allor seems to claim that a dearth of emotion is what actually makes life easier. When the turtles first meet B’een he/she is distrustful of their motivations. When Hakk-R arrives moments later he uses his leveled headed, emotion-free wits to give him the advantage.

The turtles, in their teenage-fueled enthusiasm scare B’een with their overzealous pleas to come with them. When Hakk-R arrives, unclouded by such enthusiasm, he is able to make an argument that convinces B’een to come with him. The logic is he uses here is so sound that even Michelangelo, he of almost pure emotion, admits that Hakk-R has an advantage over the turtles. That Hakk-R is able to so easily get the drop on the turtles because he isn’t too excited or exuberant would suggest that Allor thinks too much emotion can indeed be a bad thing.

So what, then, are we to make of the theme of this issue? Is it that giving into emotion is the one true path or is it that it’s important to keep your emotions in check? Maybe the answer is neither. Allor makes a point at the end of the issue to mention that the Turtles are teenagers and therefore prone to emotional highs and lows. In essence, they are still learning how to best manage their emotions as they navigate Dimension X and their own lives. Just as you spoke of in your intro, Patrick, the Turtles are learning how to tap into emotion when it’s needed and how to manage it when it’s to their detriment. The juxtaposed views Allor offers here about emotion seems to point in this same direction when we consider his theme for the issue.