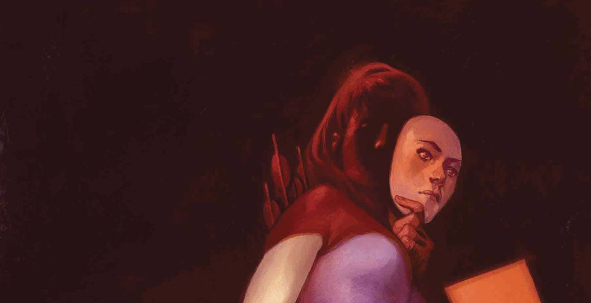 The Hawkeyes are team players. Whether it’s the Avengers for Clint or the Young Avengers for Kate, they’re more or less synonymous with their respective teams. That’s part of what makes their solo series so subversive and interesting — in part because it finds them away from their usual teammates, and in part because it finds them forging new teams out of the people around them. Only, for Hawkeyes, it’s never quite that simple. Case in point: the first half of Kelly Thompson and Leonardo Romero’s Hawkeye 9 provides an object lesson in why Kate needs her team, but the second complicates their relationship, forcing Kate to keep that team at an arm’s length.

First, let’s talk about the demonstrated value of the team. This issue opens with Kate waking up in a cage, held prisoner by the fight club she talked her way into in the previous issue. There’s a fun action sequence as Kate thinks her way through her second cage match, but the actual heroes of this issue are Detective Rivera, the LAPD SWAT team that raids the fight club, and Kate’s friends who point them in the right direction. Indeed, Kate is on the verge of losing consciousness when they arrive.

Who knows what would have happened to Kate if they hadn’t stormed in at that exact moment? The point is: Kate needs her friends. She’s a formidable force on her own, but she still needs someone watching her back.

Which is exactly what makes the second half of this issue so heartbreaking. After unequivocally proving how useful they can be if Kate would just let them, Kate shuts out Quinn, Ramone, and Johnny.

She’s embarrassed and ashamed that her father is the one behind everything, so she distances herself from her friends, which is only going to put her in another bad spot. Indeed, more or less the second she sends her friends home, a mysterious figure (almost certainly either Madame Masque OR some kind of Madame Masque-controlled Kate LMD/clone) arrives and threatens Kate and Lucky. Thompson and Rivera couldn’t be more clear in how desperately Kate needs her friends — she just needs to figure that out before it kills her.

One comment on “The Value of Teammates in Hawkeye 9”