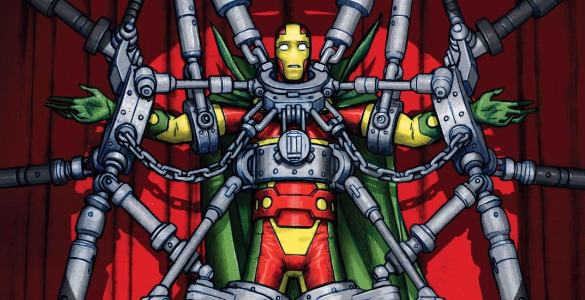 Michael: Jack Kirby’s Fourth World tales were weird, wild, and ultimately short-lived. In spite of this they have left a lasting impression on the DCU, inspiring later generations of writers to try to emulate the spirit of Kirby’s original saga. Jim Starlin, Grant Morrison and more recently Robert Venditti have shown us their take on The New Gods and now Tom King and Mitch Gerards add to the mythos in Mister Miracle 1. 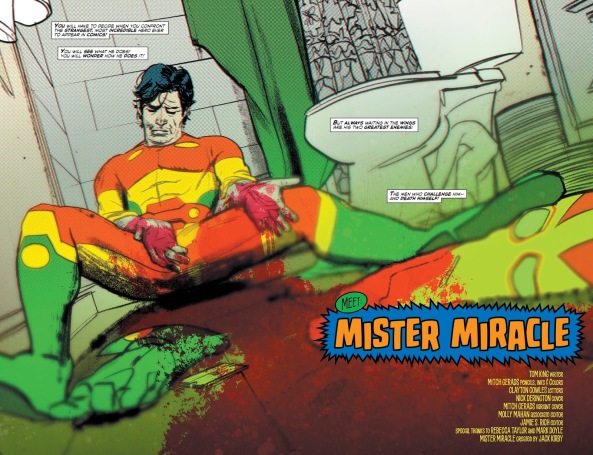 That’s a hell of an image to debut a comic book with. Mitch Gerards employs the classic 4 Color Process/halfdot coloring method to give Mister Miracle 1 an old-school vibe that looks as if it could’ve been published in Kirby’s time itself. Despite this opening spread and a few other full-page panels, the majority of the issue is adherent to the 3×3 panel layout — a favorite of both Gerards and King’s.

These kinds of layouts speak to us in a language of familiarity, so when we see a break in that pattern it stands out to us. One of the most frequent breaks in pattern are the black panels with the white lettering “Darkseid is” — but more on that later. It makes sense to have the same visual pattern with intermittent breaks in said pattern, as an extension of Mister Miracle himself. As Mister Miracle, Scot Free is the ultimate escape artist who subverts expectation and defies belief. These breaks in panel structure are akin to Scot breaking free from chains, deathtraps, or Darkseid himself.

Mister Miracle 1 is an interesting exploration of celebrity and mental illness wrapped in a Fourth World tale. The basic plot of the issue is that Scot Free is being rushed to the hospital after his wife Big Barda discovers him post-suicide attempt. Barda worries about Scot’s mental state while he goes on late-night talk shows and convinces the public that his brush with death was just his latest escape attempt. Meanwhile the war between New Genesis and Apokolips hits a boiling point as Darkseid has apparently gotten a hold of his coveted Anti-Life Equation, forcing Barda and Scot to join in the effort to stop him.

One of Mister Miracle’s most impressive feats is also one of his earliest ones: escaping Darkseid and the fire pits of Apokolips. As the legend goes, Highfather and Darkseid traded their respective infant sons Scot and Orion in order to broker peace between their worlds. Traditionally it seems that Kirby fancied the notion of “nature over nurture,” as Orion had his father’s characteristic rage and Scot had his father’s characteristic optimism — despite the environments they grew up in.

No matter how strong your biological ties may be however, I don’t believe that you can be raised in a hellish environment of hate and suffering without coming out on the other side with some mental scars. In general, Scot Free is a happy-go lucky man who has made the best out of a truly terrible situation. He’s a hero and a celebrity and has the love of his life. But as anyone who has had struggled with depression, anxiety, PTSD, or any other forms of mental trauma/pain can attest to, these “mental scars” are ones that live with you. For Scot, they manifest in the form of those “Darkseid is” panels I mentioned earlier.

King and Gerards don’t go into detail as to what Scot is thinking of in particular but I have no doubt that it is symbolic of the pain that his “father” Darkseid inflicted on him. And while we can all relate to having some form of past trauma haunt us and cause us to go to a dark place, not all of us have to “hold ourselves accountable” in the court of public opinion like Scot does. Was Scot trying to attempt “the ultimate escape” or was he trying to escape the pain that is Darkseid? I think the answer lies somewhere in between those two extremes.

While Mister Miracle 1 explores these real world ideas of trauma and celebrity, it is also a story about powerful gods that literally live on another plane of existence so there’s likely more going on than meets the eye. This is purely speculation of course, but I’d wager that Scot is trapped in some Inception-esque prison of Darkseid’s making.

Another interpretation of those “Darkseid is” panels is viewing them as Darkseid’s “reprogramming” of Scot Free. If Darkseid does indeed have the Anti-Life Equation, then he has the ability overpower men’s will — and Scot has the most indomitable will of all. Another hint of the “dream reality” is the talk show host Godfrey, who is most definitely Darkseid’s underling “Glorious Godfrey.” Godfrey taunts Scot with the idea that he might not have actually “escaped death” with his suicide attempt after all. 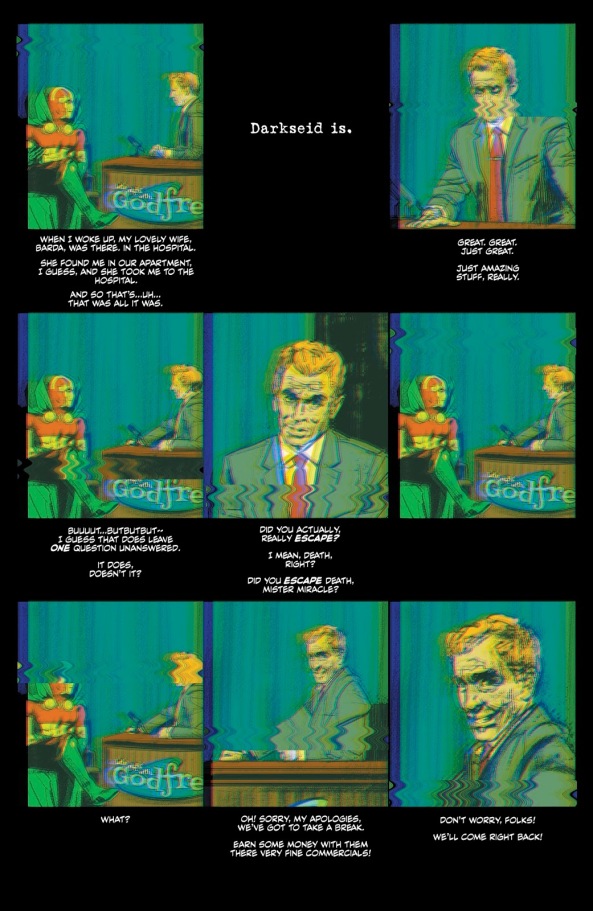 Mitch Gerards’ hazy colors and VHS-style TV presentation makes for a very dream-like reading experience. Add to that Scot’s “visions” of his old pal Oberon and his belief that Barda’s eye color has changed and you’ve got a credible “dream world” on your hands. My theory is that Darkseid doesn’t have the Anti-Life Equation yet and is somehow using Scot to obtain it for him a la Inception.

Patrick, what’s your take? I though Mister Miracle 1 was a lot of fun with some heady ideas that absolutely necessitate a second read-through. Do you have any insight on the dream-like quality of the book? Is Scot losing his grip or are there more surreptitious things going on? How much should we trust what we see in a book that focuses on an escape artist/master of illusion? What do you think about Orion showing up to just beat up Scot then BOOM-ing out? Is he just trying to be a tough guy? Do you think he believes Scot to be weak for attempting suicide?

Patrick: Your Inception-esque theories are interesting, but I think that ultimately sells short the experiences our boy Scott is in this issue. You’ll no doubt notice that I’m switching the spelling back to the double-t “Scott” instead of the Apokolipsian spelling of “Scot”. King uses this more common spelling throughout, emphasizing the humanity of the character over his superhumanity. Michael mentioned that the issue starts off with a spectacular splash page of Scott’s suicide attempt, but the real first page is much more muted, much more personal — an extreme close-up on Scott’s face. 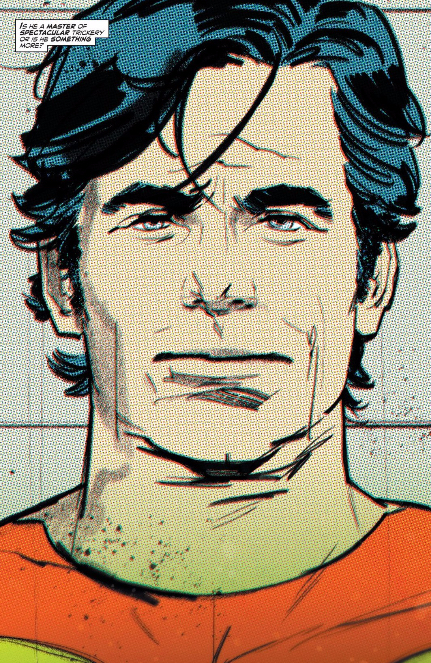 We’re in close enough to see every single dot of Gerards’ old school color methods. This is accompanied by a bizarre narration that seemingly belongs to no one, and addresses the reader directly, posing exactly the kinds of questions Michael was posing earlier. “Is he a master of spectacular trickery or is he something more?” The narrator is acting as some kind of impossible hype-man, shouting at the readers to make some noise. But what those kinds of leading questions and aggrandizing statements miss are the vulnerable, human aspects of the character.

So I end up questioning the same parts of the issue Michael does, but I am less suspicious that Darkseid is the one pulling the strings. All of the audio visual glitches during the interview are a result of Scott trying to romanticize his suicide attempt — instead of slowly bleeding out on the floor of his own bathroom, he wants to believe that he was escaping a water-filled tube on live TV. The running commentary that accompanies the more fantastical version of his suicide attempt gives us some hints. 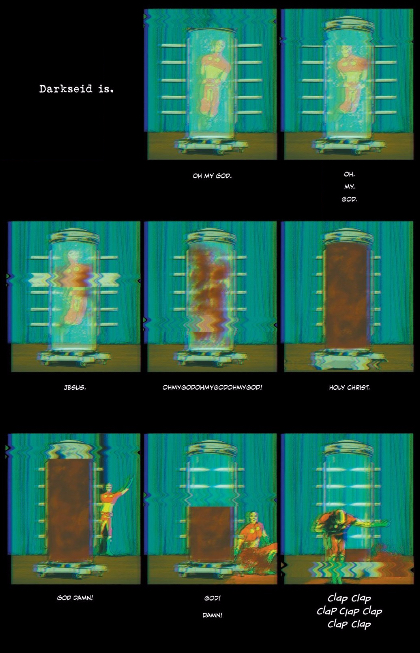 First of all, it’s worth noting that every one of these exclamation evokes the name of God. And again, we’re not totally clear on who is speaking these words. Is it the studio audience? Godfrey? Scott himself? The pages that follow offer no additional clues, as the closed captioned-style lettering refuse to assign speakers to individual lines of text. It is as though “the TV” is saying it. Those panicked violations of the third commandment are way too sincere, and way too personally invested to belong to someone watching what they know to be a stage show. Scott is taking either his own panic, or Barda’s upon discovering him on the bathroom floor, and imagining stunning an audience with an escape so spectacular that it gets the same response. He’s literally cinematizing his own life, trying to make sense of the narrative wherein his trauma gets the better of him and he makes an attempt on his own life.

Scott’s also in denial about the permanence of death. Not only does he envision it as something he can side-step to monstrous applause, he seems to be discounting its effect on others. Scott has an entire scene with Oberon — they shoot the shit about some Thanagarian cuffs, Oberon tells a joke, Oberon draws patiently on a big ol’ cigar. But Oberon’s been dead for weeks. The thing is, Scott totally knows this, and the reader has all kinds of clues that should lead us to that same conclusion. Here are the three biggest clues all in one panel. 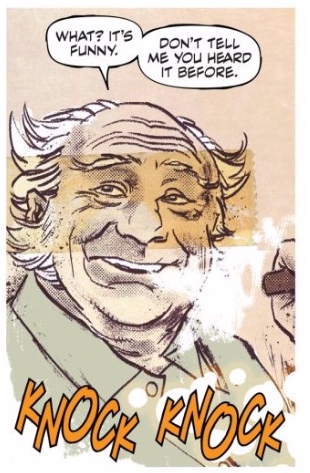 There’s tape over Oberon’s eyes, just as there is in the other close-up panel Gerards draws of him. The effect is pretty unsettling, like the artificiality of the page is being emphasized, and the moment is forcibly pasted together. Oberon is also puffing on one of the cigars that we know killed him, the cause of his death face-to-face with the fantasy that he’s still alive. And lastly, there’s this question about the God joke. Has Scott heard it before? We have — the readers. That’s page four of this issue. 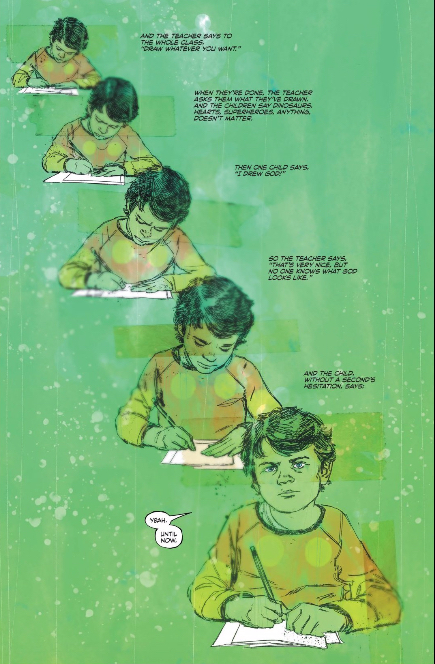 This is the issue’s orderly paneling at it’s most broken, but it’s also foreshadowing every other weird bit of imagery and trippy storytelling from later in the issue. Who is speaking? Oberon — a dead man? The child is also seemingly attached to the page with the same tape that covers Oberon’s eyes in the panel I posted above. And then the very last trippy thing — the piece of information I totally don’t know what to do with: the child has blue eyes. Is the child Barda? Or is Scott simply seeking the confidence of this child in his partner?