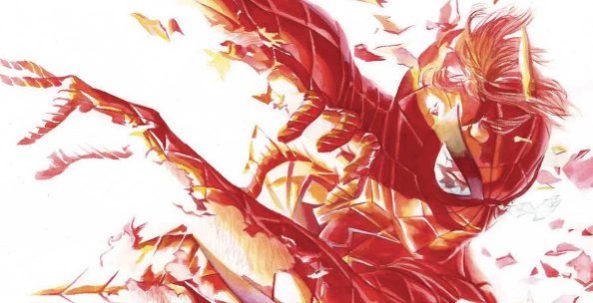 This volume of Amazing Spider-Man has always been about amplifying Uncle Ben’s famous mantra that “with great power must also come great responsibility,” forcing both global power and responsibility on Peter Parker’s shoulders. It’s an elegant way of further dramatizing Peter’s relationship to that mantra, taking a naturally street-level character responsible for resolving international conflicts and global pandemics. But, as with any change in superhero comics, this new status quo came with an expiration date — even if we didn’t know what it was. Amazing Spider-Man 31 doesn’t necessarily represent the end of Parker Industries, but it returns Spider-Man so convincingly to his platonic form that it’s easy to see it as the conclusion of that particular chapter of Peter’s life.

Fearing that Doc Ock will get his (and Hydra’s) hands on Parker Industry’s proprietary tech, Peter opts to order it all destroyed — every line of code, every file, every shred of paper. It’s an extreme measure, to be sure, but with Octavius confirming that basically all of Parker Industry’s gadgets were built upon his own spider-bot technology, thus giving him a backdoor to the entire company, there really was no other option. Peter Parker may have the wherewithal (and loyalty of brilliant minds) to rebuild his company from the ground up, but then Slott and Immonen hit us with a return to another classic Spider-Man feature:

(It’s worth noting that the distinction between the armor-suit Spidey’s been wearing in this volume is virtually identical to his classic uniform, seen here, so the reveal is almost too subtle to really scan. The difference mostly comes down to colorist Marte Gracia’s approach to both — shiny [with glowing eyes and chest insignia] for the armor and matte for the classic suit.)

This second return to form suggests to me that we might see Peter Parker returning to the scope and values that we generally associate with him. There’s no doubt that his decisions and outlook will be shaped by his experiences as a globally-minded, jet-setting CEO — we’ve already seen that come out in interesting ways in this volume — but I wonder if the aftermath of Secret Empire will put Spider-Man back in New York. That’s simple speculation at this point, but I’ll be damned if this issue didn’t get me excited for that possibility.