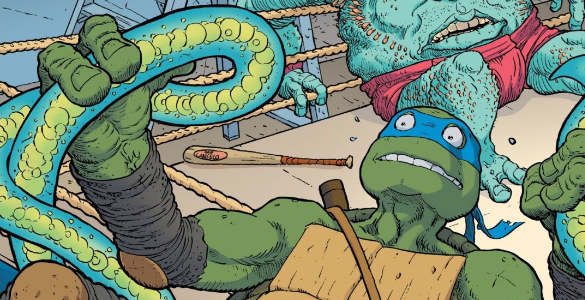 The creation myth surrounding the TMNT comic is well known, but just in case you don’t know it, here it is again: Kevin Eastman and Peter Laird were bored one night so they decided to make a comic that was basically a joke. Their idea was to make a comic that parodied popular monthlies of the day with material that was so outlandish it couldn’t help but entertain. This idea proved a hit and TMNT became a fan favorite in no time due to its humorous stories, irreverent tone, and just basic overall weirdness. Fast-forward thirty years later and the series is still a hit with fans of all ages despite the many incantations the title has undergone. However, one has only to look at the Dimension X spin-off to remember just why people fell in love with this series in the first place.

In this second issue of the mini-series the turtles are on another planet attempting to persuade another alien to testify against Krang in intergalactic court. This go around, the turtles are trying to persuade Anemon, a blind sumo-like alien, to join them but he is afraid of the shame he might face by showing up in court.

That plot is straightforward enough and indeed that’s not where the charm of the issue lies. Rather, this issue stands out because it hearkens back to the weirdness that defined the early incarnations of this series. You only have to look as far as the guest star, Anemon, in this issue to understand what I’m talking about. Anemon used to work for Krang, but when he tried to escape his evil master he lost his sight. His remedy for the situation is to befriend a weird eye/fish creature and to jam it on his head to act as his new retina.

There’s nothing about this that isn’t just plain strange. I have to give credit to Ulises Farinas and Erick Freitas for conceiving of such a bizarre idea, but even more credit has to go to artist Michael Dialynas. It’s hard to say who made the call, but the choice of centering Anemon’s face on his torso throws off my normal perception of the human body just enough to be constantly jarring. Pair that with his talking eyeball friend stuffed on his head and the bizarre nature of this issue is easily established.

What makes this strange site fun, as opposed to distracting, is that it reminds me of where TMNT came from. These days, almost everyone views the turtles as commonplace — they’ve become such a cultural touchstone that they seem natural these days. But when the turtles first came around they were weird and it’s fun to see that same spirit of strangeness here in the present day once again.